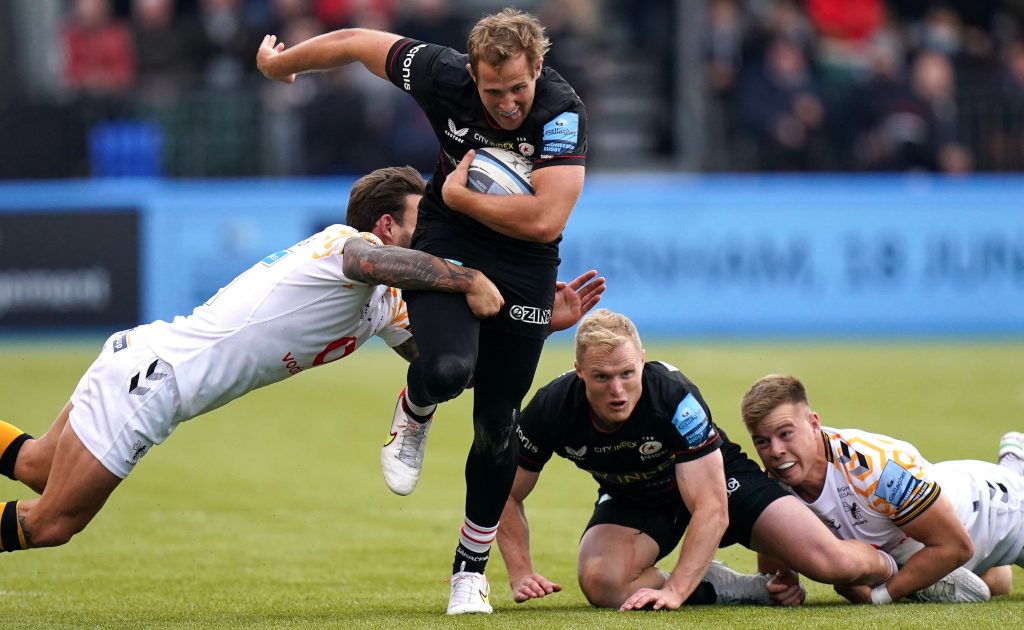 Saracens boss Mark McCall believes that Max Malins has been helped by continuing his development in the Premiership.

The England back three player signed for Bristol Bears on loan following Sarries’ relegation, featuring for the West Country outfit in 2020 and 2021.

He played a starring role for the Bears, helping them to the summit of England’s top-flight before returning to the Londoners ahead of this season.

Malins has found some stunning form and touched down four times in their 56-15 triumph over Wasps, which followed on from his hat-trick against Bath.

McCall said: “He wouldn’t have benefited from playing in the Championship last year.

“Those players who were 23, 24 (years old), we knew we couldn’t afford to stop their development by playing in the Championship for a year and he was one of those.

“You can see with him, Ben (Earl), Nick Tompkins and Alex (Lozowski) as well, they’re all playing really well at the moment.

“It will be interesting to see (where he plays for England) – he’s played four games for us; two at full-back and two on the left wing, which is the rotation we wanted to do.

“I think he prefers playing at 15, if I’m honest, but we’ll wait and see – he’s doing pretty good on the left wing.”

On his team’s performance, McCall said: “It wasn’t error-free, there were mistakes along the way, but the pleasing thing was how we dealt with them; we just moved on to the next thing.”

Saracens eased into a 27-3 half-time lead, thanks to tries by Jamie George, Malins and Billy Vunipola.

Malins crossed the try line three more times in the second half, with Lozowski and Earl adding to Sarries’ tally and Jimmy Gopperth and Zach Kibirige striking for depleted Wasps.

“I think we’ll walk away disappointed, although we had six guys out there making their debuts, so we get to see more people in a Wasps jersey.

“Hopefully, especially a few of the younger guys, they will get more time on the pitch and more time playing at this level, but I don’t think you can take too many positives away from a defeat like that.

“We turned over the ball a fair few times then gave it back immediately, so there was some good grit in our defence, but then we were just sloppy straight away.”

Meanwhile, Exeter Chiefs director of rugby Rob Baxter has already set his sights on Gloucester after seeing his side succumb to a shock defeat to London Irish.

The West Countrymen went down to the previously winless London Irish 33-21 on Saturday, leaving the Chiefs with just three victories in six matches.

“We weren’t on our toes and that hunger to fight for our try-line… it’s a funny thing. It’s clear right here and now that the consistency of our mental approach to the game is our biggest problem.”