Home Features RWC Pool B: Contenders, ones to watch and more 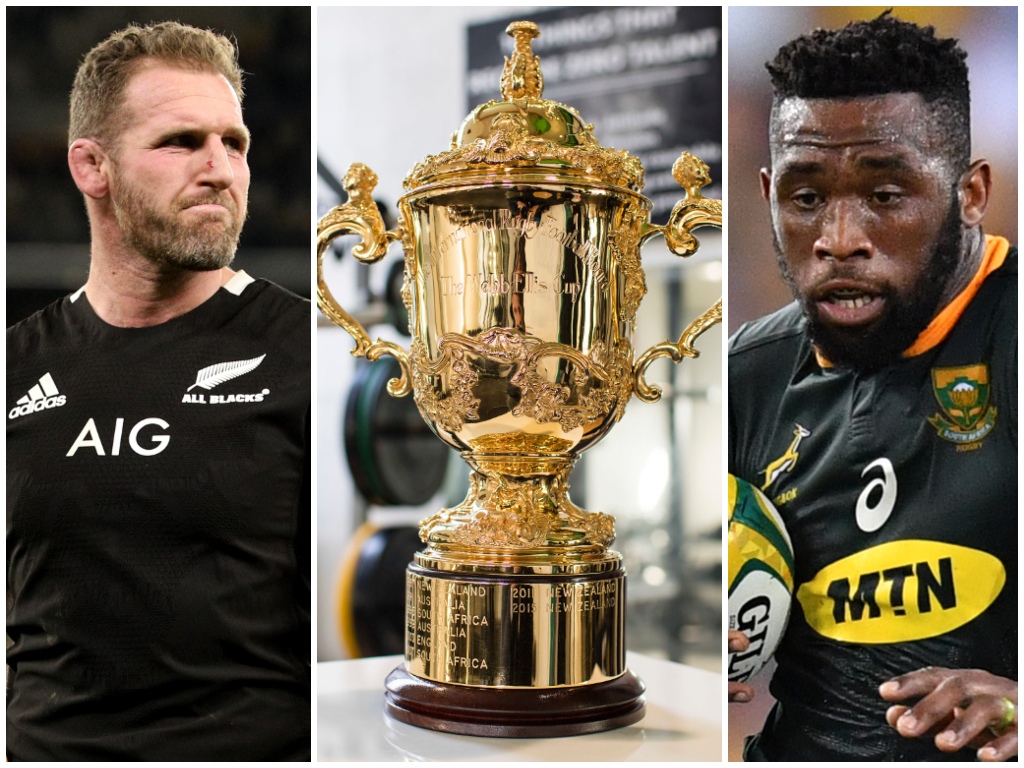 Ahead of the Rugby World Cup, we preview each pool in our own unique way as we build towards the ninth global tournament. Next up, Pool B.

Contenders: With five tournament wins between them, New Zealand and South Africa are overwhelming favourites to advance to the World Cup’s knockout rounds as the two top teams in this pool.

The All Blacks are on the cusp of their third successive tournament win and head coach Steve Hansen has selected a strong squad with a good mix of experience and youth, although eyebrows were raised when he omitted veteran front-row and two-time World Cup winner Owen Franks from his 31.

Although the world champions have not reached the dizzy heights of previous seasons, and finished in third place during the recent Rugby Championship, they should not be underestimated and are still favourite to win this tournament. Despite their indifferent recent form, they can call upon several match winners, who have the ability to change the course of a match with a moment of brilliance when they have their backs to the wall.

New Zealand v South Africa | TRC Rd 2 Highlights
The @AllBlacks and @springboks played out a dramatic 16-16 draw in Wellington, with the result only the fourth time the sides have been locked at full-time. pic.twitter.com/2kebJ0ekFs

Meanwhile, their arch rivals, the Springboks, head into this tournament in confident mood after a superb Rugby Championship campaign which resulted in them winning that competition. Their head coach, Rassie Erasmus, deserves plenty of praise for his role in the side’s success as he has brought some positivity back into Springbok rugby and played a leading role in their revival since taking charge of the team last year.

Erasmus has plenty of depth in his ranks and, although he has a settled look to his first-choice side, there is a good spirit in the Bok camp. He has rotated his charges intelligently so far and will look to continue doing that during the pool phase.

Players to watch: Hurricanes star Ardie Savea heads into this tournament in a rich vein of form and has arguably been the best player in the All Blacks team over the last year. Savea’s all-action style and ability to play in all three back-row positions makes him a certainty for a starting spot in Japan. Although he is primarily an openside flanker, Savea has shone on the other side of the scrum of late and his partnership with fellow tearaway Sam Cane and captain Kieran Read will be crucial to the All Black cause.

Meanwhile, Montpellier-bound fly-half Handre Pollard is a vital cog in the Springboks’ wheel and will be hoping to continue his superb recent form when the two-time World Cup winners take on the defending champions in their tournament opener in Yokohama on September 21. Pollard’s physical approach and direct attacking style makes him a handful for defenders while his goalkicking is also excellent, making his name one of the first on the Springbok teamsheet. His value to South Africa should not be underestimated and Bok fans will be hoping he does not get injured during the tournament.

Elsewhere, although Canada will battle to advance beyond the pool stages, keep an eye on veteran wing DTH van der Merwe, who is set to play in his fourth Rugby World Cup. The Glasgow Warriors flyer is a prolific try-scorer for club and country, as he proved at the 2015 tournament when he crossed the whitewash on four occasions in as many matches. The 33-year-old might be in the twilight of his career but should still be a threat on attack.

Outside chance: With New Zealand and South Africa the front-runners to qualify from this pool, the Azzurri should finish in third place. Although they have numerous talented players in their squad, Italy are perennial underachievers at Test level and don’t expect that situation to change during the World Cup. They should be competitive during the early stages of their matches against the All Blacks and Springboks but don’t be surprised if their intensity levels wane and they eventually suffer heavy defeats against their more fancied opponents.

With losses inevitable in those games, head coach Conor O’Shea will view their matches against Canada and Namibia as opportunities to restore some pride and will be hoping for big victories against those minnows. The Azzurri will, once again, look to veteran number eight and long serving captain Sergio Parisse for inspiration while players like Sebastian Negri, Tito Tebaldi and Michele Campagnaro should also provide good support. Also keep an eye on up-and-coming stars like Matteo Minozzi and Jake Polledri, who have bright futures in the game and should make a big impact during the tournament.

Subplot to watch: There’s plenty of hype around the pool’s big showdown between the All Blacks and Springboks which takes place in Yokohama on day two of the tournament. Both teams will be desperate to secure victory as the losers will in all likelihood set up a quarter-final clash with Ireland, who are expected to finish as Pool A’s winners.

Although New Zealand are tournament favourites, it’s not a foregone conclusion that they will win this match against the Springboks as the South Africans head into the tournament as one of the form teams, after completing their recent successful Rugby Championship campaign with an undefeated record.

The Springboks will also take confidence from the fact that they have performed well against the world champions recently. Apart from securing a hard-fought 16-16 draw in Wellington earlier this year, the Boks also claimed a memorable 36-34 win over the All Blacks at the same venue last year before suffering a narrow 32-30 loss in the corresponding fixture at Loftus Versfeld in Pretoria later in 2018.

With plenty at stake in Yokohama, this should be another closely fought battle between two excellent teams in what is set to be a game of contrasting styles with the All Blacks’ enterprising approach facing off against the Boks’ pragmatic style of play.

Also rans: Canada and Namibia head into this tournament as rank outsiders and if truth be told, the showdown between the sides in Kamaishi City on October 13 – which is the pool’s final fixture – should be a battle to avoid the wooden spoon as both sides are expected to lose all their matches before that encounter.

Canada were the 20th and final qualifier for the World Cup after beating Hong Kong to win the repechage tournament in Marseille earlier this year. Despite that achievement, they head into the World Cup low on confidence as they have battled to build momentum ahead of the tournament. They found the going tough at this year’s Pacific Nations Cup in Fiji and finished at the bottom of the overall standings after losing all three of their matches against the United States (47-19), Fiji (38-13) and Tonga (33-23).

Despite that, they are a proud rugby nation, who have participated in every World Cup since the inaugural one in 1987 and reached the quarter-finals at the 1991 tournament. They will be keen to improve on their 2015 performance when they finished at the bottom of their pool after losing all four of their matches.

Namibia, meanwhile, qualified for the World Cup by winning the 2018 Rugby Africa Gold Cup where they beat Kenya in the final. The Welwitschias will not be lacking in motivation as a victory at this year’s tournament will be a momentous one for them. Since they made their Rugby World Cup debut in 1999, Namibia have played 19 matches and lost all of them – a statistic they will be determined to alter with a win this year.

Newbie to watch: After calling the shots as New Zealand’s first-choice number 10 during the Rugby Championship – with regular pivot and two-time World Rugby Player of the Year winner Beauden Barrett shifted to full-back – there will be extra pressure on Richie Mo’unga’s shoulders as the All Blacks’ chief playmaker during the Rugby World Cup.

We can't wait to see what All Blacks' playmaker Richie Mo'unga brings to his first World Cup! More of this we hope!#RWC2019 pic.twitter.com/k9piOqZKmE

The rookie fly-half, who heads into the tournament with just 12 Test caps under his belt, has shown that he has the skill set to do well in a pressure cooker environment, after playing a leading role in the Crusaders’ successful Super Rugby campaigns between 2017 and 2019. Mo’unga’s impressive form for the Christchurch-based franchise has led to Hansen backing him in the Test arena and, if the All Black forwards can provide him with good front-foot ball, the 25-year-old should make a big impact at the global showpiece.

Best bets on 888sport: Most of the attention will be focused on the pool’s opening match and, after their excellent recent form, odds on a Springbok victory have been slashed considerably. The Boks are worth a flutter at 13/5 to top the pool.

New Zealand are renowned for their attacking style of play and, with potent finishers like Sevu Reece and George Bridge at their disposal, don’t be surprised if one of the aforementioned duo finishes as the tournament’s leading try-scorer. Reece is 10/1 to achieve that feat while Bridge has odds of 12/1 to do that. South African duo Cheslin Kolbe and Sbu Nkosi also look enticing with odds of 14/1 for both of them. Pollard and Mo’unga are also worth a bet at 5/1 and 10/1 respectively to finish as the leading points-scorer in the competition.