Home Features RWC Pool A: Contenders, ones to watch and more 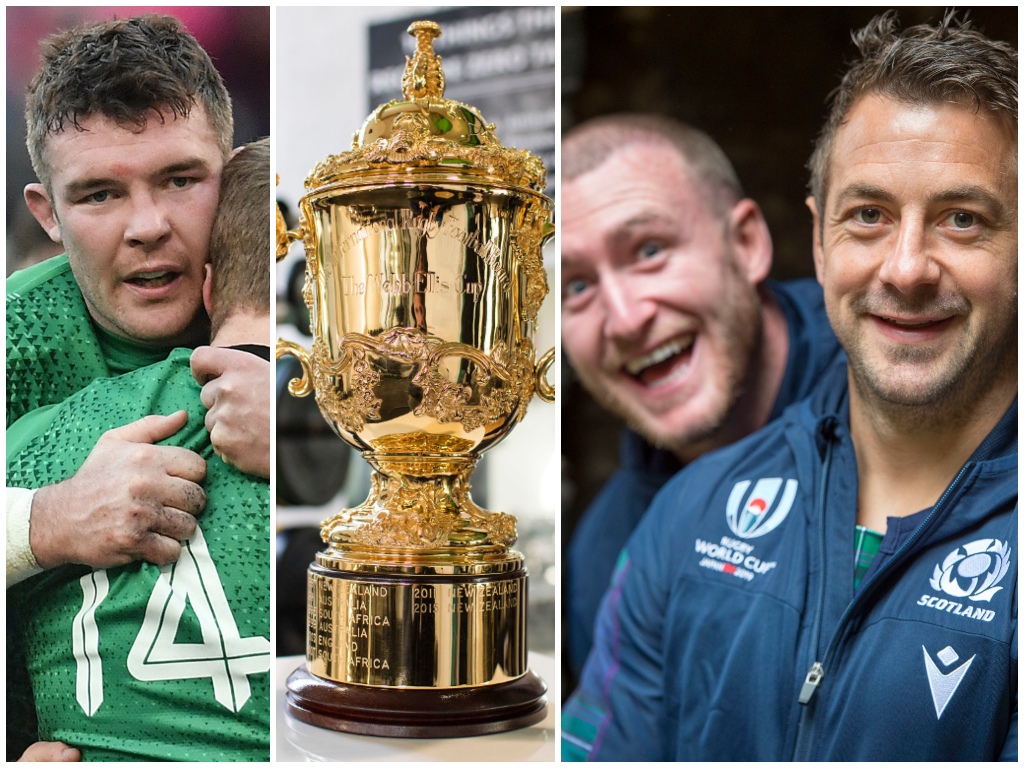 Ahead of the Rugby World Cup, we preview each pool in our own unique way as we build towards the ninth global tournament. First up, Pool A.

Contenders: Ireland are the favourites to top this pool after a hugely impressive four years. While 2019 hasn’t been their greatest, this might count in their favour, if anything. Teams which peak shortly before the start of the Rugby World Cup rarely win the tournament.

After winning the Six Nations Grand Slam and beating the All Blacks last year, Ireland know they’re capable of anything. Following defeats to England and Wales this year, they are also aware what they need to work on in order to reach their potential at the World Cup in Japan.

Scotland and host nation Japan should fight it out for second place, as they did in their World Cup 2015 pool. Scotland came out on top on that occasion, but not without a major scare from a Japan outfit which even managed to stun South Africa en route to three pool victories.

Since then, Scottish rugby has enjoyed some memorable days. Gregor Townsend’s charges finished an impressive third in the 2018 Six Nations, defeating France, England and Italy. Later on last year, they saw off Argentina twice. However, 2019 saw a dip in form before the warm-ups.

The Scotland squad are Tokyo-bound for Rugby World Cup 2019!

Thanks for all your support this summer. Looking forward to seeing lots of Scots in Japan! #AsOne 🛫🏴󠁧󠁢󠁳󠁣󠁴󠁿🇯🇵 pic.twitter.com/R7z75rfBOt

Japan, by contrast, won four matches in a row before going down to South Africa last week — albeit the triumphs came over modest opponents. They put in good showings against New Zealand and England before that winning streak, but lost those matches 69-31 and 35-15 respectively.

Jamie Joseph’s men will be boosted by home advantage and riding the wave of their Pacific Nations Cup win. The New Zealand-born coach has boldly declared his intention to lead the Brave Blossoms to the quarters, and rightly so. If they click we could have a shock in Pool A.

Players to watch: Ireland will largely pin their hopes on the form of reigning World Rugby Player of the Year Johnny Sexton.

It is unusual for a holder of that title to have to prove their worth, but at 34 and off the back of injury troubles, he has his doubters.

Fortunately for Ireland, Sexton has conquered many obstacles before in his career. From the intense battle with Ronan O’Gara for Ireland’s 10 jersey to his rise to seemingly insurmountable heights in his 30s, he has come a long way and shown he knows how to prove people wrong.

Sexton’s influence is vital for Joe Schmidt’s men, although they also have a tremendous talent in free-scoring wing Jacob Stockdale.

The Ulster speedster broke the Six Nations try-scoring record last year, bagging seven tries. He then capped his 2018 off with a try in their 16-9 win over New Zealand – Ireland’s first home win against the All Blacks – before being the joint leading try-scorer in 2018/19’s Champions Cup, tied with Sean Cronin on six. It’s fair to say that his CV isn’t too shabby for a 23-year-old and Ireland need him firing.

Meanwhile, Scotland full-back Stuart Hogg is a tremendous player with the potential to single handedly turn a fixture in the blink of an eye.

The 2016 and 2017 Six Nations Player of the Tournament picked up an injury early on this year. His absence was certainly felt thereafter during the Six Nations, but he was back in the Scotland squad for the Rugby World Cup warm-ups in a major boost for the national team.

Outside chance: Although Ireland and Scotland are the favourites to progress, it seems an understatement to label Japan an ‘outside chance’, hence why they featured in the tail end of ‘contenders’. Nevertheless, they are the team which best fits that title in this pool.

The race for second place in Pool A should be tight between Townsend’s established Six Nations side and an emerging powerhouse in the game.

🗣️ "That one score Hesketh had to his name against South Africa in the shock 34-32 triumph will remain etched in everyone’s memory."

Home advantage gives Japan a huge leg up. Even on familiar territory at the 2015 World Cup in England, Scotland only narrowly avoided being eliminated by the Brave Blossoms, who come into this tournament on the back of lifting the Pacific Nations Cup title in August.

Under the guidance of Joseph, Japan will look to experienced players like captain Michael Leitch. The back-row made his international debut in 2008 and remains an important force in the team. He scored two tries in their Pacific Nations Cup title-clinching win over USA in Suva.

The New Zealand-born player was the skipper when Japan shocked South Africa in that incredible fixture in Brighton, leading from the front with 17 tackles, one try, and one vital decision: turning down a kick at goal to chase a match-clinching try that stunned the rugby world.

Leitch will be looking to help the Brave Blossoms recapture the magic in 2019, this time without sinking to an agonising pool stage exit.

Subplot to watch: The winners and runners-up from Pools A and B meet in the quarters. Almost certainly, this means New Zealand and South Africa await the two qualified teams from Pool A. If Japan do make it through, a World Cup rematch with the Springboks could be on.

Ireland should make it out of Pool A but face a mammoth clash in the quarters. One way or another, there will be a giant slain before the semis. The current World Rankings see Ireland top, New Zealand second and South Africa fourth – one of them will bow out in the last eight.

Fortunately for Ireland, they have won two of their last three international games against the All Blacks and six of their last 10 against the Springboks. Scotland, by contrast, have lost six games in a row against South Africa and have never beaten New Zealand in 31 attempts.

Japan, Samoa and Russia meanwhile have not played against the All Blacks and Springboks as regularly as Ireland and Scotland have. However, many of the Japanese players will know the two southern hemisphere giants well from their time in Super Rugby with the Sunwolves.

Also rans: Samoa have enjoyed some proud days in their World Cup history, progressing to the quarter-finals in 1991 and 1995. However, they have recently been in decline and are currently ranked 16th in the world, one place behind Tonga.

Head coach Steve Jackson has not been given plenty of time to transform his squad and their Pacific Nations Cup showing was unimpressive. Although they picked up a 25-17 win over Tonga, Samoa went down 13-10 to USA and 10-3 to Fiji. Most recently they lost to Australia.

It is difficult to see Samoa unseating two of Ireland, Scotland and Japan, although veteran centre Alapati Leiua looks in promising form.

Connacht have beaten Russia – pool opponents for Ireland at the World Cup – in Moscow.

A 42-14 win is great work for Andy Friend's side and also underlines again how gargantuan a task Russia face in Japan. #RWC2019

Russia, meanwhile, should be cannon fodder for Ireland and the other teams. An 85-15 loss to struggling Italy demonstrated that they are some way off the pace. Russia did nearly spring a surprise on Japan late last year, but it’s likely they’ll prop up the Pool A standings.

Newbie to watch: Darcy Graham announced himself on the big stage with a brace in March’s 38-38 draw with England. Townsend’s men came from 31-0 down with the wing giving us a glimpse of what could come later in the year. He’s since gone from strength to strength.

What makes defending against the 22-year-old wing an even more frightening prospect is the idea of him lining up alongside lethal full-back Hogg. Anything that he lacks in experience, he can gain from combining with the 2016 and 2017 Six Nations Player of the Tournament in Japan.

Graham has an interesting background, having been groomed not only by Edinburgh, but also in the Scotland 7s team. He earned his first cap against Wales in November 2018 and has not looked back since. Don’t bet against him adding to his five tries in seven matches for Scotland.

Best bets on 888sport: There is likely to be good value in backing host nation Japan to qualify for the knockout stages. Their odds of finishing second in this pool are 3/1, meaning that although there is a risk attached to this punt, the potential reward outweighs it.

The gap between Scotland, priced at 11/20, and Japan is overestimated by many. Although Scotland are a more experienced side, Japan are at home and go into the World Cup off the back of a Pacific Nations Cup win. The recent defeat to South Africa should not cause major concern.

Ireland are unsurprisingly favourites to top Pool A at 7/25 while Stockdale is Evens to finish the tournament as his team’s top try-scorer.