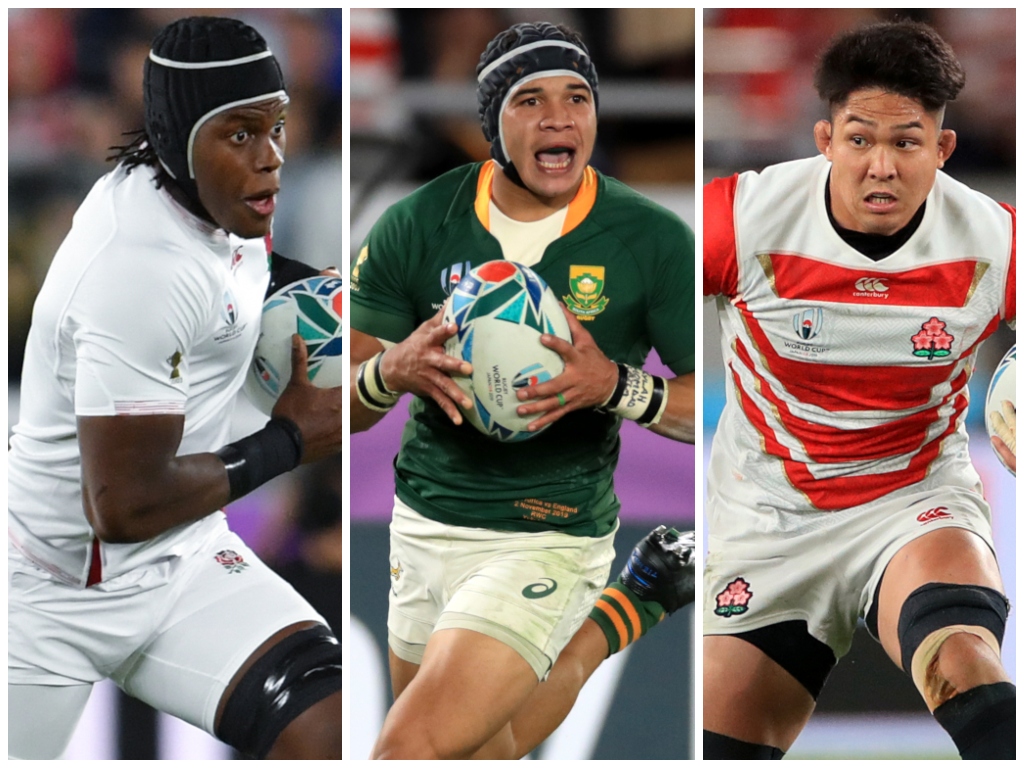 Now the dust has settled on the 2019 Rugby World Cup, we sat down to select our Team of the Tournament from all the games played in Japan.

Following their outstanding victory, South Africa unsurprisingly lead the way with six nominations, while fellow finalists England are next best with four.

The other countries which qualified for the semis, Wales and New Zealand, are also represented, while the hosts have two players included after an excellent tournament. Make sure to leave your comments at the bottom of the page with your own team.

15 Beauden Barrett (New Zealand): It wasn’t really a tournament for great full-back play. The individuals from the two finalists, Willie le Roux and Elliot Daly, had their weaknesses, while the best of the rest was Wales’ Liam Williams, who would have got in had it not been for the performances of Barrett. The All Blacks may have struggled in the semi-final but he was excellent in every other match he played in and linked well with Richie Mo’unga.

14 Cheslin Kolbe (South Africa): An easy selection here, despite the form of Japan’s Kotaro Matsushima, England’s Anthony Watson and New Zealand’s Sevu Reece, as Kolbe’s consistency provided a spark for the victorious Springboks. Injury may have ruled the wing out of the semi-final but he scored a stunning try in the showpiece event and was excellent every time he took to the field. Has become one of the stars of world rugby over the course of this tournament and will surely have that South African right wing spot tied down for many years.

The footwork from Cheslin Kolbe is next level.

What a try this was from the @Springboks flyer in the Rugby World Cup final#ENGvRSA #RWC2019 #RWCFinal pic.twitter.com/Y2B3d929m8

13 Manu Tuilagi (England): After years of injury, it was wonderful to see Leicester Tigers’ gargantuan centre at his best during the World Cup. South Africa shackled him well in the final but no other team did as the 28-year-old became an integral part of the Red Rose midfield. Was a certainty for selection, whether at 12 or 13, and produced some excellent displays throughout the six weeks, meaning that he takes the position from Wales’ Jonathan Davies, France’s Virimi Vakatawa and South Africa’s defensive linchpin Lukhanyo Am.

12 Damian de Allende (South Africa): This was a tough one as Owen Farrell was the heartbeat of the England side, whether through his actions on the field or his words off it, but De Allende was simply excellent for the Springboks. The 27-year-old has always been a talent but has sometimes struggled to show that at international level. That was until this World Cup where he was consistently excellent and formed a superb centre partnership with Am to edge out Farrell, New Zealand’s Anton Lienert-Brown and Australia’s Samu Kerevi for this slot.

11 Josh Adams (Wales): It was wonderful to see the exceptionally talented Semi Radradra (Fiji) in full flight on the biggest stage, while Makazole Mapimpi (South Africa) and Marika Koroibete (Australia) were also superb, but it was potentially a defining tournament for the Welsh flyer. The 24-year-old has taken to Test rugby excellently and has now shown the world what he is about after ending the World Cup as the top try-scorer. It wasn’t just his instincts for the line that stood out either but also Adams’ ability to make breaks and create opportunities for others.

10 Handre Pollard (South Africa): It is perhaps harsh on George Ford, who marshalled England’s backline well during the World Cup, while Wales’ Dan Biggar, France’s Romain Ntamack and New Zealand’s Richie Mo’unga had their moments of brilliance, but Pollard was consistent throughout and was simply magnificent in the final. Kicked well out of hand and off the tee, and always did the basics well, but the Springbok fly-half was also a threat when the opportunity presented itself, which kept defences honest.

9 Faf de Klerk (South Africa): Was strangely criticised within South Africa for kicking too much, but all he was doing was following a game plan and he did it to perfection. Box-kicks were accurate and varied, while his service was sharp from the base when the Springboks got into the right areas to attack. De Klerk was also outstanding in the final as he guided the team around the field. Elsewhere, Japan’s Yutaka Nagare, Wales’ Gareth Davies and New Zealand’s Aaron Smith enjoyed fine tournaments, but the South African takes it.

8 Kazuki Himeno (Japan): Duane Vermeulen shone for South Africa but Himeno gets the nod after coming to the fore with several excellent performances during the Brave Blossoms’ fairytale run to the quarter-finals. Himeno was one of Japan’s standout players and delivered his best performance in their stunning victory over Ireland during the pool stages. The 25-year-old came into Japan’s starting XV due to an injury to their first-choice number eight, Amanaki Mafi, but although Mafi had recovered by the time of the play-offs, he had to be satisfied with a place on the bench with Himeno firmly entrenched in the starting XV.

7 Tom Curry (England): Curry’s team-mate Sam Underhill was superb and wore the number seven jersey in most matches but the Sale Sharks man is mainly an openside flanker and, although he played mostly on the other side of the scrum, he was arguably England’s best player at the World Cup. The 21-year-old was colossal on defence and attack and came of age during England’s shock triumph over New Zealand in the semi-finals where his breakdown work – in tandem with Underhill – played a big part in the All Blacks’ downfall.

6 Pieter-Steph du Toit (South Africa): The Springboks’ success was largely due to the efforts of their brilliant pack and the Stormers stalwart was at the forefront of that forward effort with several stellar performances. Du Toit would be a dream player for any coach as he is a superb ball carrier, a tackling machine and a handy option in the lineouts. He was a worthy winner of the World Rugby Player of the Year award and comes in ahead of Wales’ Aaron Wainwright, who was one of the finds of the tournament and amongst his country’s best players.

5 Alun Wyn Jones (Wales): The Wales captain struggled to keep up against the All Blacks’ fast-paced style of play in the third place play-off but, prior to that, he hardly put a foot wrong as his side reached the semi-finals. As usual, the veteran led his troops well and also brought his A-game to the lineouts which was a big part of his side’s success. Despite his advancing years, he was superb throughout and beats out Lood de Jager of South Africa.

4 Maro Itoje (England): Although Brodie Retallick did well once he hit top form for the All Blacks, it was still not enough to get in ahead of Itoje, who was one of England’s best players at the tournament. His brilliance in the lineouts is well documented, especially in his side’s semi-final win over the All Blacks where he went head-to-head with true greats of the game in Retallick and Sam Whitelock and came out on top. Itoje also did well as a ball carrier and on defence and it’s scary to think that he is only 25 and yet to reach his peak.

3 Kyle Sinckler (England): Another young Englishman who makes our team after several outstanding showings for the tournament’s eventual runners-up. Sinckler’s try against the Wallabies in the quarter-finals will live long in the memories of England fans and, apart from his superb finishing ability, he also showed off his fine handling and offloading skills as England swept all before them on their way to the final. Also stood up well in the scrums and is preferred to South Africa’s Frans Malherbe and Nepo Laulala of New Zealand.

2 Shota Horie (Japan): Jamie George (England), Ken Owens (Wales) and Julián Montoya (Argentina) were all superb at various stages of the World Cup but we’ve opted for Horie, who emptied the tank in several matches for the Brave Blossoms. The 33-year-old was a vital cog in the Japanese wheel and impressed with his accurate throw-ins at the lineouts, while his play in the loose was superb on a consistent basis and he also stood out on defence.

1 Tendai Mtawarira (South Africa): The Springbok veteran is enjoying a resurgence despite being in the twilight of his career and was one of his team’s heroes as they marched to their third tournament win. Mtawarira shone in the execution of his core duties, particularly his scrummaging. It was superb in most matches but especially in the final when he put in a dominant display at the set-piece against England’s Dan Cole. Japan’s Keita Inagaki was next best.