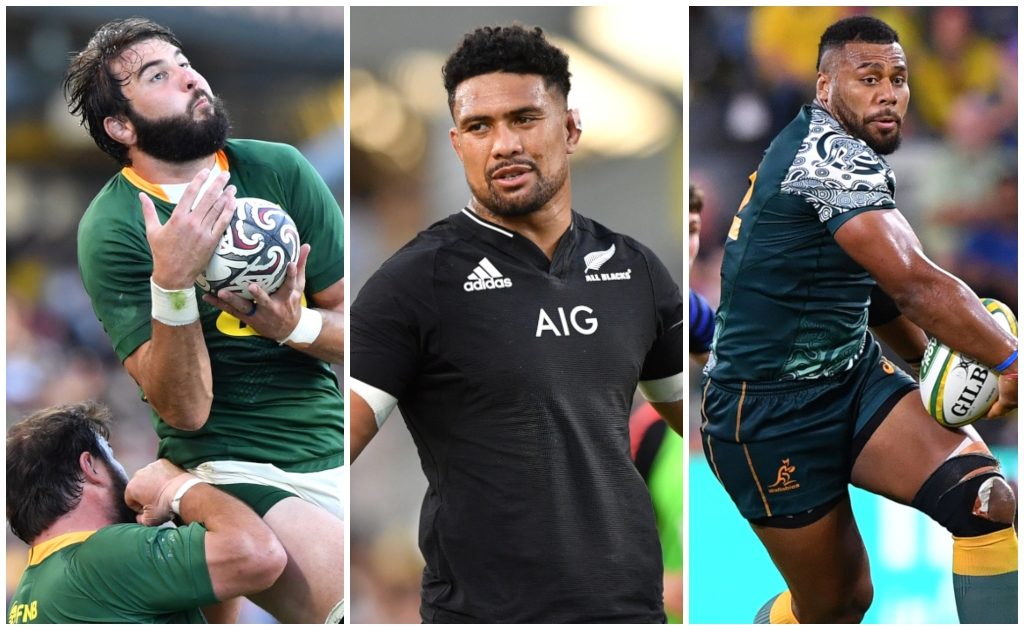 With the dust having settled on the 2021 Rugby Championship, we have gone through the action to decide which players have stood out the most over the past couple of months.

New Zealand are obviously well represented after once again winning the tournament but their rotation policy counted against some of the individuals. As a result of consistency and just sheer excellence behind the scrum, the Wallabies dominate the backline and also had a couple of key players up front.

Rugby Championship Team of the Tournament

15 Jordie Barrett (New Zealand): It’s rare you get only one All Black in the backline but heavy rotation, combined with some exceptional displays from the Australians, means that everyone but Barrett misses out. It was a defining tournament for the Hurricanes star, who produced a series of superb performances to cement himself as the number one full-back in New Zealand. He provided a match-winning moment in the Round Five clash against South Africa and even in Saturday’s defeat he kept up his high standards.

14 Andrew Kellaway (Australia):: A breakthrough competition for the Melbourne Rebel, with the wing touching down eight times in six matches. He finished the Rugby Championship by scoring a hat-trick against Argentina, which rounded off a wonderful couple of months for Kellaway. He impressed even when the Wallabies struggled and then thrived as Australia began to find their rhythm later in the tournament to take the slot from New Zealand’s Will Jordan.

13 Lukhanyo Am (South Africa): A tough call at outside centre as Rieko Ioane showed some excellent moments for New Zealand, while Australia’s Len Ikitau looks a real find, but for sheer consistency the South African stalwart gets in. It’s fair to say that Am’s chances have been limited in attack, with the Springboks’ kicking game taking precedence, but he always does his job to the highest standard. He organises the defence superbly and then came to the fore with ball in hand on Saturday, producing a stunning off-load for Damian de Allende’s try during the dramatic 31-29 triumph.

12 Samu Kerevi (Australia): How the Wallabies have missed the Fijian-born powerhouse. Kerevi has spent the past two years in Japan but Dave Rennie was handed an exemption to select the 28-year-old for the Rugby Championship and that decision immediately paid dividends. The centre was exceptional in every match they played as Australia enjoyed a positive tournament, finishing it with four successive victories.

11 Marika Koroibete (Australia): Alongside Kerevi, this was another easy selection with their star wing producing outstanding display after outstanding display. Like Kellaway, the speedster excelled when the Wallabies as a team weren’t and then shone when he was given more space. Koroibete wreaked havoc with ball in hand and must surely be considered the best wing in the world at the moment.

10 Quade Cooper (Australia): The fly-half’s change from maverick to calm and composed playmaker has been incredible this tournament. Cooper always had a penchant for the spectacular but would then be unreliable in other moments, inconsistency which used to frustrate fans, coaches and team-mates alike. Not anymore, however, with the pivot playing with the type of maturity few thought he would ever attain. Beauden Barrett had good moments for New Zealand but – and we can’t believe we’re saying this – for sheer consistency, the 33-year-old takes it.

Your efforts today will affect people you will never know. It’s your choice whether that effect is positive or negative. You can choose everyday, every minute, to act in a way that may uplift a stranger, or else drag them down… the choice is easy and it is yours 🙏🏽❤️ pic.twitter.com/mWoutzlgoM

9 Nic White (Australia): The constant chopping and changing didn’t help the All Blacks players’ chances but Brad Weber was always impressive when he was on the field, while Faf de Klerk is still struggling to find his best form, which means White gets the nod. Despite only starting three matches, he played with authority and also made an impact when coming off the bench in the other encounters. At the moment, he provides a more rounded game than Tate McDermott, whose time will come over the next few years.

8 Ardie Savea (New Zealand): This was a tough one as Rob Valetini was one of the Wallabies’ standout players, especially in their resurgence during the latter stages of the tournament, and although Savea played on the openside flank in some matches, he hardly put a foot wrong when packing down at number eight. His all-action style of play kept him in the thick of things throughout and he also caught the eye with impressive leadership as the All Blacks’ stand-in captain.

7 Michael Hooper (Australia): Springbok skipper Siya Kolisi had some fine moments, particularly in his team’s last two matches against the All Blacks, but it wasn’t enough to come in ahead of Hooper, who stood head and shoulders above the rest. Although his team battled during the competition’s initial stages and lost their first couple of Tests against New Zealand, Hooper was arguably their best player in both those games and continued to shine as the tournament progressed.

6 Akira Ioane (New Zealand): The 26-year-old hit the ground running as he caught the eye with some brilliant attacking performances during his team’s Bledisloe Cup victories. Was quieter during the rest of tournament but still played well and did not neglect his core duties, with his defence and lineout work showing signs of improvement. His countryman Ethan Blackadder also gets a mention after some fine displays.

5 Lood de Jager (South Africa): The Sale Shark has overcome his injury concerns which kept him on the sidelines for most part of the past two years and delivered some outstanding performances for the world champions. From his man-of-the-match display in his 50th Test against Argentina, to his last two outings against the All Blacks, the 28-year-old was one of the Springboks’ most consistent performers and comes in ahead of Matt Philip of Australia.

4 Scott Barrett (New Zealand): Another difficult decision as fellow All Black Brodie Retallick impressed during the early stages of the competition and Springbok enforcer Eben Etzebeth towards the end, but we’ve opted for Barrett, who despite lining up as a middle lock, played well consistently. The 27-year-old did what was expected of him in the lineouts and came to the fore with great physicality as a ball carrier and defender throughout.

3 Taniela Tupou (Australia): Although he started as a replacement for the Wallabies during the early stages of the tournament, the ‘Tongan Thor’ always made his presence felt when coming off the bench and continued his good work when he was in the starting line-up for the second game against the Springboks and the two encounters with Argentina. Although he’s an explosive ball carrier, Tupou did not neglect his core duties and scrummed well and also shone on defence.

2 Codie Taylor (New Zealand): Delivered a below par performance in the All Blacks’ final match against the Springboks on the Gold Coast on Saturday, but that was a mere blip as he was outstanding during his other outings in the competition. Gave his team an edge over their rivals as he played like a fourth back-rower at times and made a nuisance of himself at the breakdowns, was a willing ball carrier and shone on defence.

1 Steven Kitshoff (South Africa): Fellow Bok Trevor Nyakane‘s adaptability was outstanding as he delivered solid performances when starting games on both the tighthead and loosehead, but Kitshoff gets the nod as he made his presence felt with great performances as an impact player off the bench for the Boks, especially in the last two Tests against the All Blacks, while also doing well in the matches he started.