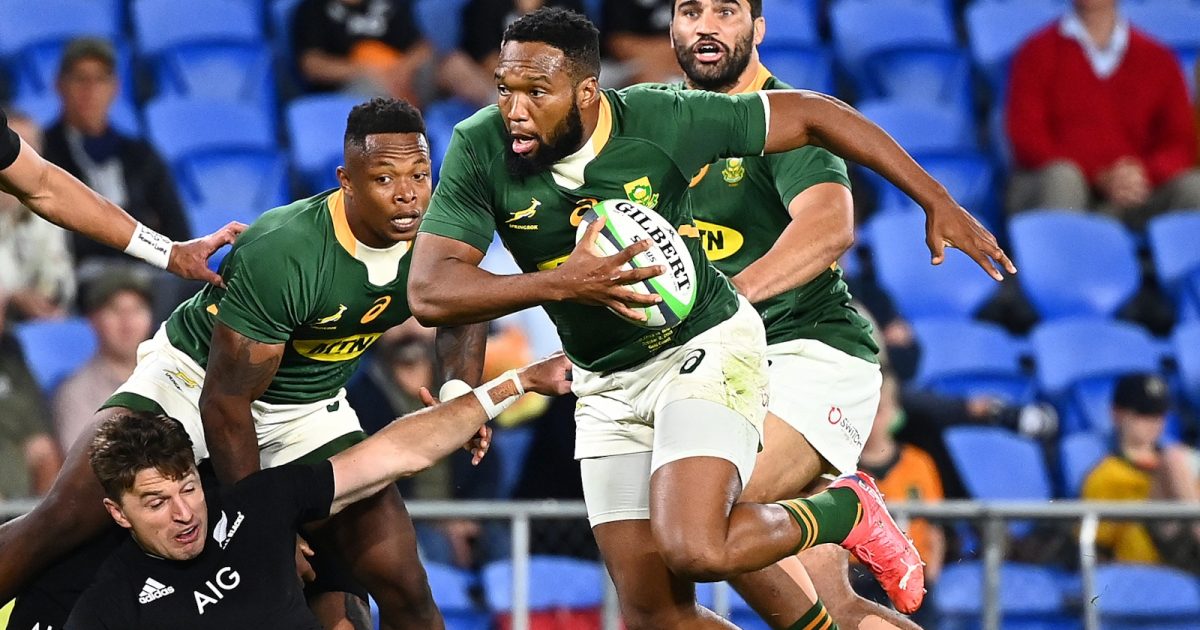 Centre Lukhanyo Am insists that South Africa will have to be at their best if they are to defeat New Zealand in their Rugby Championship opener.

All Blacks head coach Ian Foster is under fire following a series defeat to Ireland, with many supporters wanting him replaced.

They have lost four of their past five matches and go into the upcoming tournament in disarray.

With the Springboks taking on New Zealand at home over successive weeks, it provides Jacques Nienaber’s charges with a huge opportunity to set themselves up perfectly for the rest of the competition.

This current All Blacks set-up is nowhere near the one which won consecutive World Cups in 2011 and 2015, but Am believes that the Boks can’t produce anything other than a top performance if they want to start the Rugby Championship well.

“When you face the All Blacks, they are one of the teams where you have to ensure you are on your A-game all the time,” he said.

“We all know we will be facing a different threat compared to what we faced against Wales. The Boks are doing their prep and we trust that will put us in a better place for the Test.”

South Africa weren’t exactly convincing either during the July Tests, scraping to a 2-1 series win over Wales, but Nienaber believes that their clash against New Zealand will be a very different type of match.

“It will probably be a bit different to the challenge we faced against Wales,” the head coach said.

“I think if you look at New Zealand and the athletes and skill set they have it will probably be a game built around a lot of continuity.

“Also, maybe moving the ball around a bit and they also do not shy away from set-piece battles, which they showed against Ireland.

“So I think it is going to be a blend of set-piece battles and probably a bit more continuity compared to what we saw in the Wales series.”

Nienaber does acknowledge, however, that the Springboks need vast improvements ahead of the encounter in Nelspruit.

Lots to work on

“Obviously, not having played any rugby when Wales were our first game for 2022, you almost get a bit of a marker as to where we are. Then we tried to build during the Wales series,” he said.

“We were by no means perfect against Wales. There is a lot of stuff we have to work on and improve.

“We had a nice review on Monday and had a reality check of where we are and what we have to improve. The team looked at what goals we set in the Wales series and where we excelled.

“In some instances we thought we showed some good growth and in others we did not show as much growth. So at the moment it’s about fixing our own stuff.”

Nienaber named his squad for the tournament last Saturday, bringing back the experienced Duane Vermeulen and Frans Steyn, but the former is unlikely to feature against the All Blacks.

“Duane has not had a rugby session with us as yet, so I think it would be tough to get him in the mix. Frans is in training sessions,” he added.