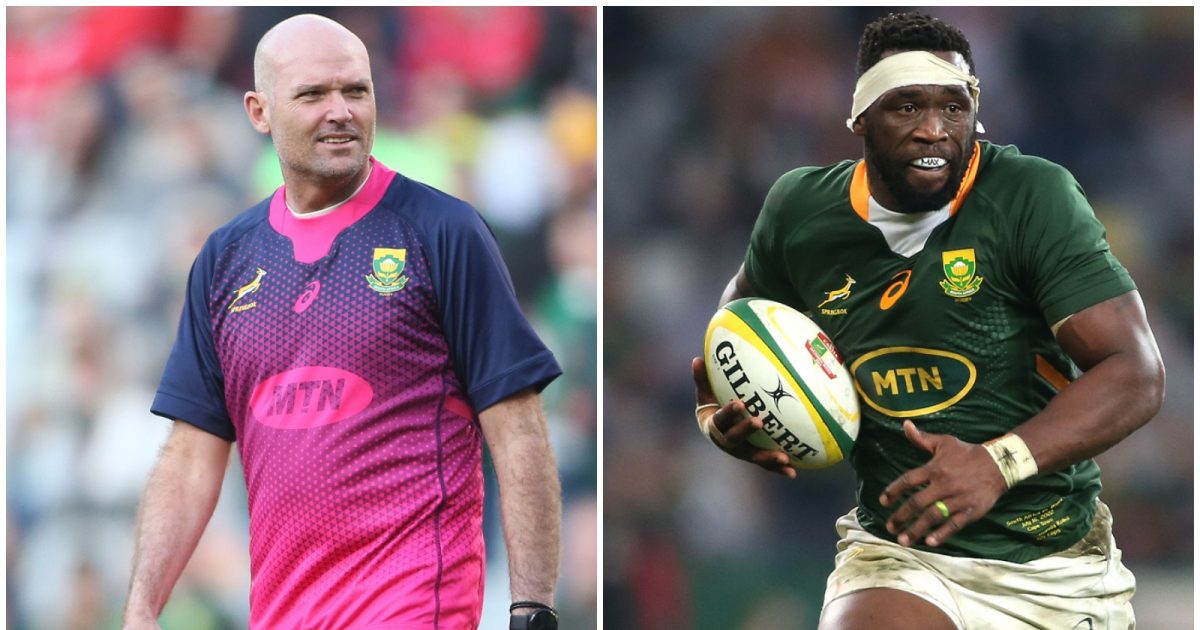 Next in our set of previews ahead of the Rugby Championship we examine the prospects of last year’s third-place finishers, Jacques Nienaber’s South Africa.

The Springboks will head into this year’s tournament in a confident mood after finishing their recent July international series on a high with a deserved 30-14 victory over Wales in Cape Town.

Wayne Pivac’s charges proved to be worthy opponents and although South Africa clinched a 2-1 series triumph with that 16-point win in the third Test, the two previous clashes were nail-biting affairs with the Boks clinching a 32-29 victory in the series opener in Pretoria before Wales bounced back with a narrow 13-12 win in Bloemfontein.

Those tough encounters would have been heaven-sent for Nienaber and his charges as it proved to be good preparation for the Rugby Championship which kicks off with back-to-back fixtures against New Zealand in Mbombela and Johannesburg on August 6 and 13 respectively.

With the opening fixtures being on home soil, the Boks will fancy their chances of winning both of those matches against their arch rivals, who come into this year’s tournament in poor form after losing four of their last five Tests.

Those two home fixtures will be huge for the Boks and if they manage to win both All Blacks Tests it sets a good platform for the rest of the tournament as three of their remaining four fixtures will be played in Australia and Argentina.

South Africa’s game plan will, once again, be in the spotlight and although their conservative approach helped to conquer Wales, they were up against a team with a similar style. With the All Blacks, Wallabies and Pumas playing more expansively, the Boks will have to consider altering their style of play and it will be interesting to see what changes they come up with, if they opt to do that.

They kicked off their campaign with successive matches against Argentina in Port Elizabeth and although the visitors delivered competitive displays on both occasions, the Boks proved too strong in each encounter and eventually sealed 32-12 and 29-10 victories respectively.

Following those wins they headed over to Australia where their remaining matches were played and they did not meet their usual high expectations.

The first fixture on Australia’s Gold Coast ended in a narrow 28-26 defeat with veteran fly-half Quade Cooper the home side’s hero, after sealing their victory with a well-taken penalty in the game’s dying moments.

From there, they moved on to Brisbane where they faced the Wallabies again but, unlike the previous week, the home side were more dominant and eventually clinched a deserved 30-17 triumph.

That set up two big encounters against New Zealand and there was plenty of fanfare about the first of those, in Townsville, as it was the 100th Test between the game’s most successful countries. The match was a tight contest with the All Blacks securing a late 19-17 victory and, in doing so, they managed to win the Rugby Championship with a game to spare.

The final game of the tournament saw the old foes doing battle on the Gold Coast and although New Zealand had already won the competition, they delivered a spirited performance. The Boks eventually sealed a hard-fought 31-29 triumph after Elton Jantjies slotted a penalty with the final act of the match.

The world champions will fancy their chances in this year’s Rugby Championship as they start their campaign with those home fixtures against the All Blacks on consecutive weekends in Mbombela and Johannesburg early in August.

The results from those games should set the tone for the rest of the tournament as their next three matches are tricky assignments against Australia – in Adelaide and Sydney – and Argentina – in Buenos Aires – before they host Los Pumas in Durban in their last match.

Although they will target victories in all of those matches, they should be satisfied with one victory against Australia – if they win those opening Tests against New Zealand – while they will expect to beat perennial basement-dwellers Argentina home and away.

With the bulk of their 2019 World Cup-winning squad still in the mix, the Boks will rely heavily on their senior contingent to lead the way again this year.

Inspirational captain Siya Kolisi will once again be at the forefront of the charge while other experienced players Eben Etzebeth, Lood de Jager, vice-captain Handre Pollard, Lukhanyo Am and Damian de Allende will not be far behind. All these individuals are core members of the leadership group and play crucial roles in the implementation of the Boks’ game plan.

Eben Etzebeth: a titan in the second row 💪 pic.twitter.com/bDn37xeqW7

South Africa’s forward play is arguably the best in the world and central to that success is the performance of their front-rowers. In the Welsh series, Trevor Nyakane, Frans Malherbe, Ox Nche and Bongi Mbonambi were the ones who started the Tests while the much vaunted ‘Bomb Squad’ of Steven Kitshoff, Vincent Koch and Malcolm Marx made a massive impact off the bench. Expect more of the same over the next two months.

Another experienced player that should have a leading role for the Boks is 2019 World Rugby Player of the Year Pieter-Steph du Toit, who despite battling with injuries in 2021, showed during the Wales series that he is still a force to be reckoned with in the Test arena. His impressive ball carrying, lineout and defensive work makes him one of the world’s best players in his position and he will be keen to impress.

Fellow back-row Kwagga Smith might not be a regular in the starting XV but always gives his all and usually makes his presence felt off the bench. Although not as big as the rest of the Bok pack, Smith has an excellent skill-set with his breakdown work and attacking play sure to test opposing defences.

While those senior players will be important, there’s a crop of younger players who have been elevated to the senior ranks and showed that they belong on the international stage. Leading the way is utility back Damian Willemse, who is in a rich vein of form and was arguably the Boks’ best player in the series against Wales. Whether at full-back – where he started two of the three Tests – or inside centre or fly-half – where he also made cameo appearances – Willemse showed his worth with some strong showings and he will be determined to build on those efforts.

Also keep an eye on young number nine Jaden Hendrikse, who impressed when starting the last two Tests against Wales. In that third encounter in Cape Town, he played to his coach’s instructions but gave a good account of himself as he proved to be a superb link between forwards and backs.

Superb kick through by Jaden Hendrikse and an equally brilliant finish from Aphelele Fassi. 🔥pic.twitter.com/4mvZWnC1TX

Willemse and Hendrikse’s emergence meant Faf de Klerk and Willie le Roux started that final Wales Test on the replacements bench but with six high intensity internationals looming on the horizon, it’s inconceivable that their experience will be discarded by Nienaber. We expect them to still be crucial to the cause, whether that is in the starting XV or amongst the reserves.

The Boks have a healthy mix of experienced players, from their victorious Rugby World Cup campaign, and up-and-coming youngsters, who have joined the world champions’ ranks in the last two years.

While they have come in for plenty of criticism due to their pragmatic style of play, their forwards are the best in the business and usually give their backs an excellent platform from which to attack. If they manage to find a balance between the two – like at the 2019 global tournament – this should be a triumphant campaign.

Their opening Tests in South Africa will be crucial in their bid to achieve that goal and we back them to do that which should boost their confidence for the rest of the tournament.

Matches against the Wallabies have proven to be tough of late but, if they manage to win both of those home fixtures against the All Blacks, they should approach those encounters in Australia with a spring in their step. Winning at least one of those games against Dave Rennie’s charges will set them up nicely for their home and away clashes against Argentina and finishing off on a high will put them in the hunt for honours. First place.

READ MORE: Rugby Championship preview: Los Pumas to show growth under Michael Cheika but remain at the foot of the table