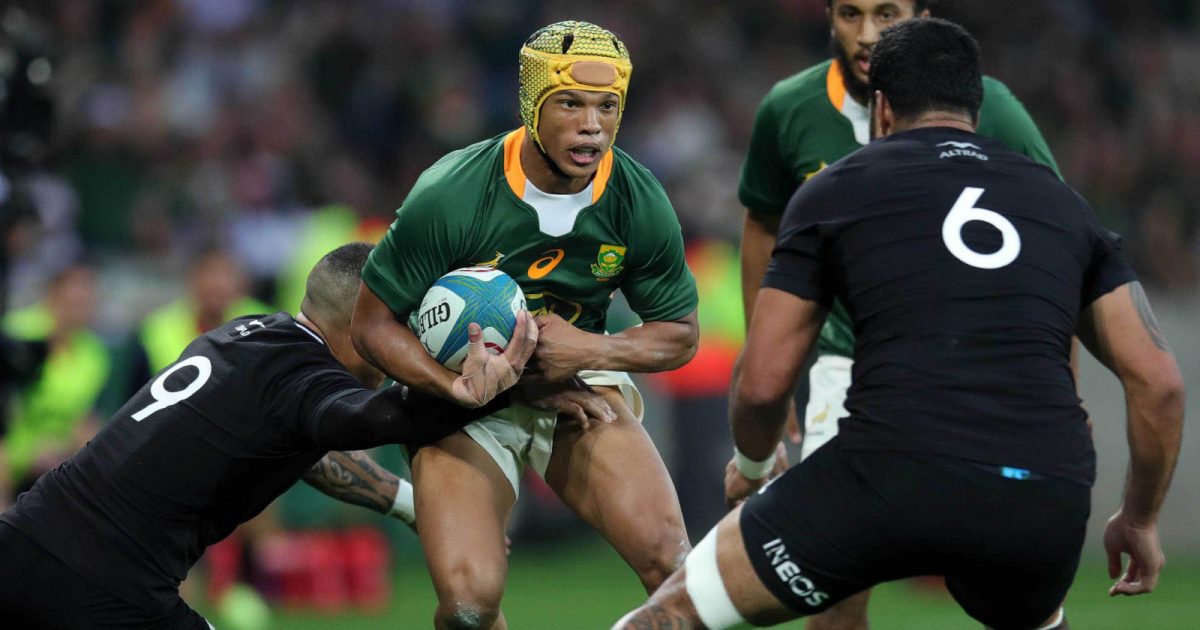 South Africa made an excellent start to their Rugby Championship campaign when they clinched a 26-10 victory over New Zealand in Mbombela on Saturday.

In a fast-paced an entertaining affair, the Springboks were full value for their win as they were the dominant side for long periods and eventually outscored the All Blacks by two tries to one.

Kurt-Lee Arendse and Willie le Roux crossed for the home side’s tries while Handre Pollard finished with a 16-point haul courtesy of two conversions, three penalties and a drop goal.

For the visitors, Shannon Frizell scored a five-pointer which was converted by Richie Mo’unga and Jordie Barrett succeeded with a penalty.

The All Blacks seldom asked questions of the world champions but when they did they were met by a superb defensive display from the men in green and gold.

New Zealand came into this match as underdogs but, if truth be told, they looked clueless on attack and this defeat will put more pressure on under fire head coach Ian Foster whose team have now lost five of their last six Tests.

Despite the visitors’ inadequacies, the Boks’ forwards deserve plenty of credit for this win as they bullied their counterparts from the outset and it was a special occasion for their hooker, Malcolm Marx, who was named as the official man of the match in his 50th Test. However, a blot on the Boks’ copybook came in the 75th minute when Arendse was red carded for taking Beauden Barrett out in an aerial collision.

The match got off to an eventful start when 43 seconds after the kick off the Boks suffered a massive blow when Faf de Klerk was knocked out cold after coming off second best when trying to tackle Caleb Clarke.

He was replaced immediately by Jaden Hendrikse but despite losing their talismanic scrum-half, the home side still had the better of the early exchanges. And in the ninth minute they opened the scoring when Arendse crossed for the opening try. This, after Beauden Barrett failed to gather a high ball from Pollard inside his 22. Lukhanyo Am pounced and managed to offload to Arendse, who had a clear run-in for his first Test try.

Pollard added the extras and midway through the half he slotted a penalty, after All Blacks skipper Sam Cane went off his feet at a ruck.

It was all South Africa during the rest of the half as they continued to have the bulk of the possession and territory with the All Blacks battling to build momentum when they did manage to get their hands on the ball. On the rare occasions that they did, the visitors’ attacks came to nothing due to several unforced errors.

In the 26th minute, Akira Ioane threw a forward pass close to the halfway line – after Beauden Barrett did well with a counter attack from deep inside his half – and five minutes later David Havili knocked on when he had an overlap on his outside inside the Boks’ half.

3 consecutive NZ losses for first time since 1998, first time lost 3 in a row by 10 points or more

Although the hosts continued to have a firm grip on the game, the All Blacks gained a reprieve against the run of play in the 36th minute when Jordie Barrett opened his team’s account courtesy of a penalty. This, after Damian de Allende was blown up for straying offside when taking the ball into contact from an attacking scrum.

That meant the Boks had their tails up with the score 10-3 in their favour at half-time but they still had plenty of work to do if they wanted to seal their first home win over New Zealand since 2014.

The opening exchanges of the second half were cagey but the hosts extended their lead in the 51st minute when Pollard succeeded with his second penalty, following a scrum infringement from Tyrel Lomax.

The All Blacks showed more intensity after the interval and tested the home side’s defence with some strong carries but they continued to make mistakes and were bullied at the breakdowns – where Marx was prominent.

In the 58th minute, Pollard put more daylight between his side and their opponents when he slotted a well-taken drop goal from 35 metres out. The next 15 minutes were frantic but another Pollard penalty in the 71st minute – after Beauden Barrett was blown up at a ruck – hammered home his side’s dominance.

Shortly afterwards, Arendse was sent off after his horror challenge on Barrett and in the 79th minute Frizell crossed for a consolation try after Clarke did well with a barnstorming run in the build-up.

Despite that score, the Boks finished stronger and they sealed their win in injury time when a pass from Cane to Frizell didn’t go to hand and Le Roux gathered before crossing for a try which sealed his side’s convincing win.

READ MORE: Dave Rennie hails Michael Hooper ‘courage’ for speaking up and insists captain will receive ‘as much support as possible’