Home Uncategorized Romania on the rise after tactical shift 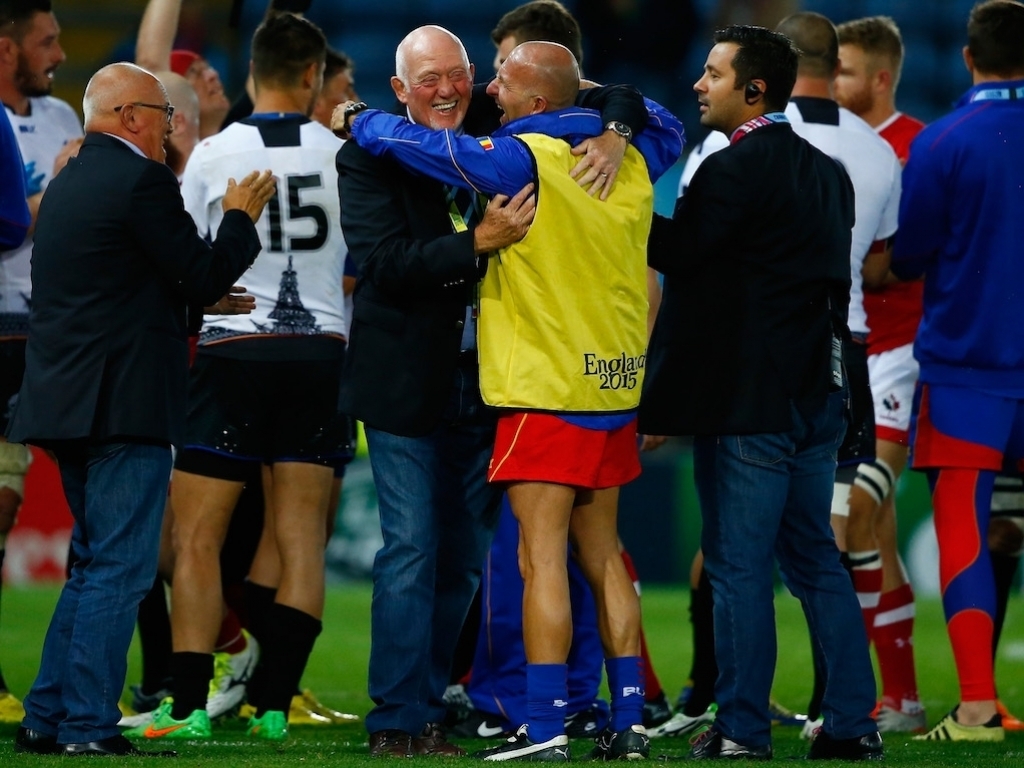 For a Tier 2 nation like Romania, Rugby World Cups are hugely important and the only chance to shine on the world stage.

All efforts were focused on the Rugby World Cup in 2015, where the Oaks performed reasonably well. Romania only won the match against Canada, after pulling off the biggest comeback in the entire history of the competition. However, the team held its own in the match against Italy, losing by a margin of only 10 points, and managed to avoid being routed against both France and Ireland.

It was obvious that 2016 would be a year of testing and reconstruction. European teams qualify for the World Cup based on the results in the Rugby Europe Championship (REC), a poor man’s version of the Six Nations, which is played in complete obscurity on the same weekends. This year’s results did not count for qualification, so it was the perfect time to rebuild the squad for 2019.

Romania’s head coach Lynn Howells announced that all matches this season would be used to test players and attempt to develop the traditional forward-based style of the Oaks into a more modern and faster game plan. Romanian backs, usually nothing more than defensive blocks in a team that played old-school eight-man rugby, would finally get the chance to prove their skills.

Several veterans retired from the team at the end of the year, among them tight head Paulica Ion, legendary flanker Ovidiu Tonita, number eight Daniel Carpo and centre Csaba Gal.

To replace them and build depth for the future, Howells has tested an unprecedented number of players in 2016. He used more than 50 different players this year. The squads were heavily rotated, with only five players featuring as starters or from the bench in all of the 10 games prior to facing Uruguay.

The source for most of these players was Romania’s domestic league, the Superliga. Few people outside the country seem to be aware that Romania actually has a fully professional internal competition.

While small in size (with only seven clubs) and plagued by all sorts of problems, the Superliga is the main reason behind the improvement of Romanian rugby in recent years. It provides a sizeable selection pool for the national team, with a number of domestic professional players that most other Tier 2 nations can only dream about. In addition, there are many foreign players in the league (including a former All Black) and some of them are eligible to play for the Oaks through the residency rule, offering some interesting options, in particular for the backline.

Despite the constant experiments and the full-strength squad not being available for any of the matches, the results have been surprisingly good, finishing the year with 10 wins from 11 matches. There was only one defeat in Tbilisi, where Romania travelled with a depleted, experimental squad. The Oaks did well in the REC (including a 30-0 trashing of Russia), easily won the World Rugby Nations Cup in June and defeated the United States and Canada in November.

These are excellent and surprising results for a side under reconstruction. But even more surprising were the tactics used this year. The Oaks have attempted to play fast attacking rugby, with good results. While the backline play became more structured after every match, the opposition were weak, making it hard to judge the actual progress made. Many Romanian fans were curious if Lynn Howells will risk a wide game against the North Americans in November, or revert to the old tested forward tactics.

Both the USA and Canada travelled to Bucharest prepared for a forwards’ struggle. They expected Romania to pressure them using scrums and mauls, with little danger from the backs. They were wrong.

While their forwards were largely able to match the Romanian ones, it was their backs who were outplayed. This allowed Romania not only to win both matches but to do it playing at times a fast and spectacular brand of rugby that not even the most loyal fans of the Oaks believed they were capable of. The North Americans were surprised to meet a team playing fast modern XV-man rugby and proved unable to contain the Oaks in the first half. Romania wasn’t able to maintain the same tempo for the entire 80 minutes, but the gap was already too big to allow the opposition to recover.

Even more remarkable is the fact that most people expected the improvement in the backs to come from the newly-eligible foreign players. While the imports were surely very useful, it was actually some of the local players who did very well, like the quick and resilient young winger Ionut Dumitru or scrum-half Florin Surugiu (famous for proposing to his girlfriend on the pitch at Wembley during the Rugby World Cup).

Romania do not have any true stars, but, there are several players who have been extremely important for the team in the last few years.

Utility back Florin Vlaicu has just become the most-capped Romanian player in history with 95 caps and will probably become the side’s first player to reach a century next season. He is already the country’s top points scorer. Vlaicu is not a spectacular player but made it so far through versatility and hard work. He is an accurate kicker who can cover centre, fly-half or full-back and the Oaks have won several close encounters due to his boot, including the win against Canada at the RWC.

Full-back Catalin Fercu is a brilliant player who could have become world famous if he played for a stronger club or a Tier 1 national team. A speedster with good positioning and defensive skills, Fercu is a lethal solo runner with an uncanny ability to decide when to launch one of his counter-attacking raids in order to catch the opposition defense off-guard. He refused several offers from top clubs in his youth and only accepted a move to the Saracens in 2014, too late for him to be granted a real chance to break into their first team.

A top scrummager, loosehead prop Mihai Lazar is the main reason why few countries have managed to overcome the Romanian scrum. He decimated the Scottish set-piece in the 2011 RWC, almost enabling the Oaks to cause a historic upset win. He continued to do so in every match ever since, including the games vs France and Ireland in 2015.

As for the new caps to watch for, Lynn Howells shocked everybody by starting the 20-year old rookie centre Vladut Popa in the Canada Test. Despite not even playing for his club in the Superliga yet, Popa delivered a very solid performance and might develop into an excellent player. Tangimana Fonovai is a very powerful and fast winger or centre of Tongan origin, who will probably cause serious havoc after he fully integrates in the team. Prop Alex Gordas is a good front row prospect, strong in set-pieces and defense.

So what’s next for Romania? The new season of the Rugby Europe Championship next year counts for RWC qualification, the main goal of the national team. It will be followed by the first international tour for the Oaks after many years, with confirmed away Tests in Canada and Uruguay.

Sadly, Romania remains the black sheep of international rugby, constantly ignored by World Rugby in its Test scheduling. They are the only Tier 2 nations not to play a Tier 1 Test this year, and they haven’t played against a Tier 1 team outside of the Rugby World Cups for more than ten years.

Perhaps this absurd situation will finally end in 2017 and the Oaks will get a chance to prove themselves against the top nations. Similarly, Romanian rugby often feels completely ignored by most of the rugby news outlets in the world.

One thing is certain: the new attacking style of the Oaks has made Romanian fans more optimistic than ever. Lynn Howells might have achieved what seemed impossible, to change the old forward-powered tactics and introduce an exciting brand of rugby that could allow the team to attract new fans, both at home and abroad.

The Oaks have a legendary past, but perhaps the time has come to leave it behind and accelerate into the future.