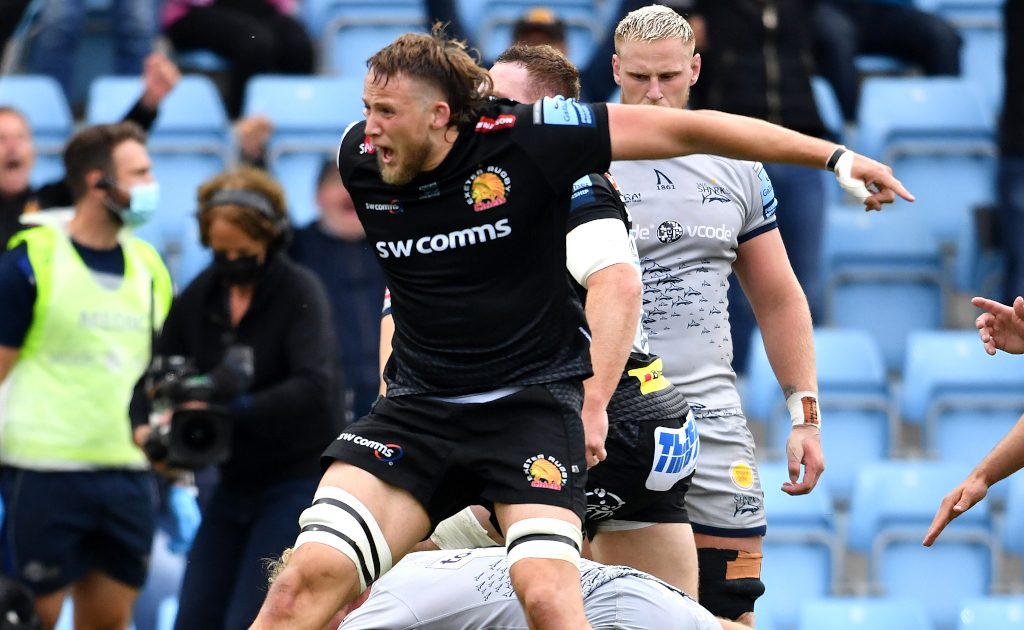 Exeter are now hunting a third title in five seasons, and Baxter said: “Credit to the players.

“They had to dig deep last week (Exeter beat Sale 20-19 in their final regular-season game), and they have done the same again, although I thought we had more control today.

“There were the difficulties of the week with the two lads (Sam Skinner and Dave Ewers) being banned. It was tough for us.

“But we turned up, we were bang-on and we started the game with a great intensity. We managed to maintain that for most of the game.

“Most of our mistakes and errors came from a real enthusiasm to do things, and I will take that any day of the week. Where we are now, I am very pleased.”

Exeter scored two tries while Sale’s England centre Manu Tuilagi was off the field following a fifth-minute yellow card after a swinging arm hit Chiefs flanker Richard Capstick, who went off and did not return.

Hooker Luke Cowan-Dickie and wing Tom O’Flaherty struck after Tuilagi left the action, and Chiefs maintained the upper hand through full-back Jack Nowell’s two touchdowns on his comeback after six weeks out injured and an Alex Cuthbert score, plus three conversions and three penalties from skipper Joe Simmonds.

Nowell’s return saw Scotland captain Stuart Hogg make way and move down to the bench, and Baxter said: “It was tough on Stuart. At some stage we were going to bring Jack Nowell back in, and then I have got to make the call.

“(Wings) Tom O’Flaherty and Alex Cuthbert have been going well, so unfortunately for Stuart, he was the guy who missed out. That’s how it works.

“When you’ve got three or four really good performers playing for three positions, somebody misses out each time. It was Stuart this time. That may not be the case next week.”

And on next week’s encounter, Baxter added: “Those Harlequins players had a great second half today (against Bristol). It was a fantastic game of rugby.

“My biggest concern is that we conceded 30 points, and that makes you think about what we will have to defend against next week.

“Hopefully we can keep the ball and nullify their threat.”

“The game was lost in the first 20 minutes,” Sale director of rugby Alex Sanderson said.

“When the hangover subsides on Tuesday and we step back, we will be very happy with how far we’ve come.

“We have come a long way. We had five lads out there aged 20 or younger and they’ve dominated. That is exciting.

“We are only going to go from strength to strength, and this will not be the last time we are here.

“It has been about laying a really solid base, a strong foundation to improve and build on, and we’ve done that, looking back right now.”