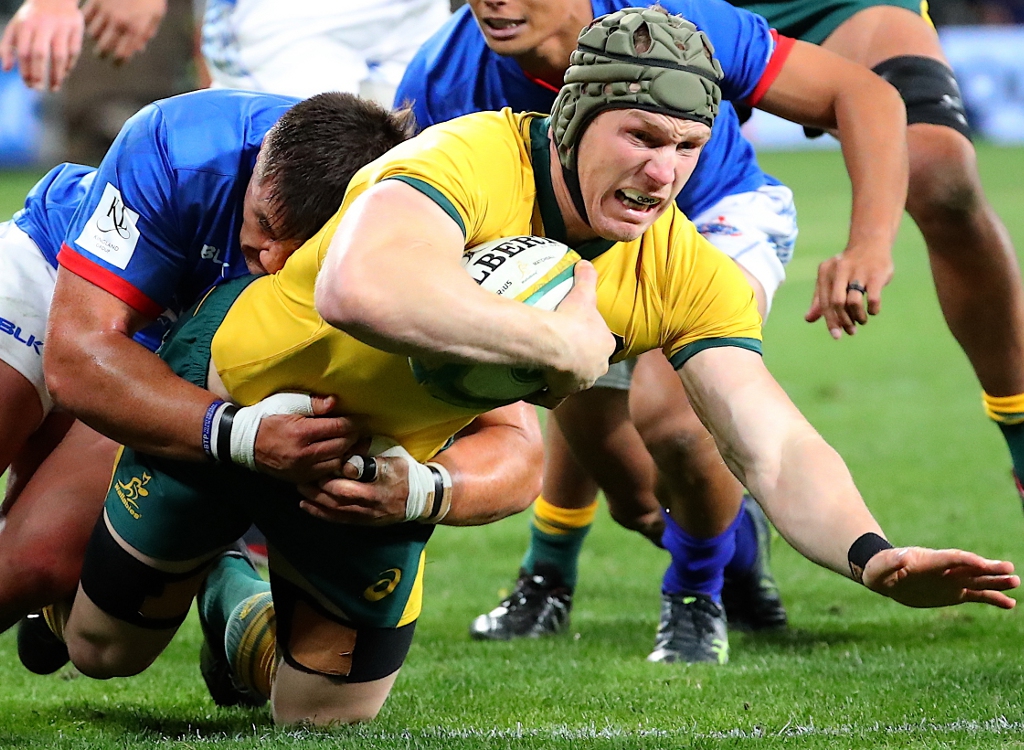 Legendary Wallabies back-row David Pocock has announced his retirement from rugby, ending a career that saw him also play for the Brumbies and Western Force.

Almost a year to the day after his international retirement, Pocock has called time on his professional career, opting not to return to Japan where he was due to play under former Wallabies coach Robbie Deans at Panasonic Wild Knights.

He did so not because of injury – of which there were many throughout his 15-year career at the top – but because it was “time”.

“There’s this author in the (United) States, Rob Bell, who I’ve really enjoyed his stuff over the years, and I’ve heard him say, ‘You can leave when it feels like a graduation or you can hang in there and you have to leave when it feels like a divorce’. I’m hoping that it’s going to feel like a graduation,” Pocock told Rugby Australia’s official website.

“While it was a tough decision, it really feels like the right one now and as a lot of former athletes talk about, it’s not going to be smooth sailing but it’s going to be a great challenge.”

Pocock still has that relentless attitude to make a difference in the world.

Except, it won’t be on a rugby field where he hopes his next big play is achieved.

Starting each morning before dawn, he starts his days at 6:15am by practicing yoga before turning his attention to completing his masters – where he has two subjects to complete, including his thesis – of sustainable agriculture.

It’s been a passion since he was a young boy, admiring birds and his then-favourite animal the cheetah, and Pocock has set his sights on doing what he can to help humanity face its two biggest challenges, according to the 32-year-old, the “climate emergency and the biodiversity and extinction crisis”.

As a child growing up in Zimbabwe, Pocock was inspired by the Springboks’ triumph at their home 1995 World Cup, where Francois Pienaar was presented the Webb Ellis Cup by the late Nelson Mandela and held it up.

It ignited the flame within Pocock and set him on a unique road, where he would not only set his sights on replicating Pienaar’s feat of holding the Cup but that he was also be an inspiration both on and off the field.

Had he, however, managed to go one better in 2015 – where the Wallabies were pipped by the All Blacks in the World Cup Final at Twickenham – Pocock may well have called time on his career earlier than now.

“Yeah, there’s probably some truth in it,” the 32-year-old revealed.

“As a kid, that 1995 World Cup that South Africa won it just, I don’t know, it did something to me as a young eight-year-old, and that was just such a dream to play at a World Cup and want to win a World Cup.

“The World Cups are still real highlights looking back and all the experience of being at a tournament like that and the preparation that goes into it and being able to perform on that stage, and what it means to Australians and people around the world. After 2015, I guess, it was thinking about what was next and I kind of felt that if I could have a year away and get stuck into some other things, I would then be really keen to try and build to the next World Cup in Japan, and so I decided to do that.”

That painful exit in 2019, where the Wallabies were well-beaten by an impressive England side in Oita 40-16 still haunts Pocock.

“I think all three World Cups were all very difficult, and we fell short at all three,” he added.

“I think the amount of time and effort and focus that goes into preparing for a World Cup, there’s a pretty weird period after something like that, where you fall short, where it’s, I don’t know, soul searching and you feel a bit haunted by it all and you replay things about what you could have done differently or what you would have changed.

“On the day, we were fairly soundly beaten by a pretty good English team. It certainly does (haunt you). You wonder if you were on the other side of the draw, not losing that game to Wales (29-25), but that’s sport, that’s the great thing about sport, you get an opportunity and if you’re not the most deserving on the day then that’s what history records.”

While Pocock’s attention in recent years has been divided between his deeds on the field, his family and his devotion to making the world a better place, his desire to win has never waned.

He might have single-handedly kept the Wallabies’ 2011 World Cup campaign alive with a colossal effort against the Springboks in the quarter-final, and backed it up with an extraordinary tournament four years later in the UK, but Pocock admits he didn’t achieve what he set out to do.

“Probably not,” he said, responding to whether he achieved what he wanted as a rugby player.

“As a kid you dream of winning, winning the World Cup – but that didn’t happen. But that’s life. You’ve got to make peace with that and try take all the learnings out of it. That’s the real challenge is when you do fall short, learning from it and then moving on and trying to do things better next time.”

Even still, he’s immensely proud of what he’s achieved.

“I never thought about numbers to be honest. I just desperately wanted to be out there and prove that I could do it and make the most of those opportunities,” said Pocock.

“The toll it takes on your body is a consideration for every rugby player and, I guess, that’s something you’ve got to weigh up. It wasn’t the deciding factor for me. I don’t feel like I’ve been forced to retire.

“I’m at the point where I feel incredibly grateful for all the opportunities I’ve had and in many ways I’ve lived out a childhood dream, and something, as an immigrant to Australia, that has given me so many opportunities and it feels like the right time to say thank you and take all those learnings and try and contribute in other areas.”

What career path Pocock moves into has been a question that has followed the deep thinker right throughout his career.

For the time being he’ll continue to work as an ambassador for West Australian rugby, where he hopes to spread the game throughout the state – and not just in the private school system.

He also hopes to assist Zimbabwe make the 2023 World Cup in France.

Wants to make a difference

And as for politics or, indeed, humanitarian work, he’s not quite sure, but Pocock is adamant that he wants to make a difference.

“I think the two biggest challenges we face are the climate emergency, and the biodiversity and extinction crisis that we have to seriously up our ambition and start to do deal with it in a bolder way,” he said.

“Working in that space. Trying to come up with solutions and trying to make it more tangible to people and finding ways that people can engage and not feel like it’s this massive issue that’s very political, and it’s something that is a big challenge and we can and must face.

“We have to have better policies – and politicians have a huge role to play. We’re certainly not seeing that at the moment. I mean, we have a once in a generation opportunity to rebuild our economy and build a renewable superpower in Australia and we’re propping up gas. It’s insane. It is pretty bleak, but I know there’s a lot of good people in there trying to change things. Who knows, hopefully we get a federal ICAC pretty soon, and I think that’ll start to get politicians on their toes a bit more and hopefully building something better for all of us.”