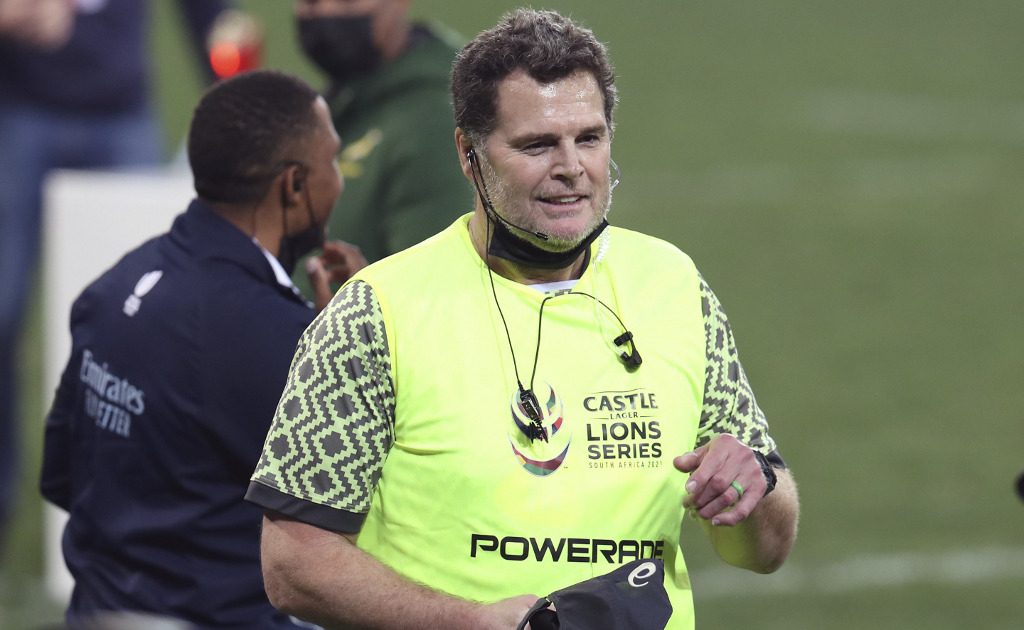 South Africa’s director of rugby Rassie Erasmus has revealed his radical template to improve the game.

Erasmus’s concept has three points of focus; a second referee to assist with the breakdown, scrum specialist referees and clamping down on time-wasting, particularly around kicking at goal.

Writing in his column for the Daily Mail, Erasmus acknowledges how radical his ideas seem, but believes a breakdown referee will help govern a complicated facet of the game.

“The idea of two referees sounds radical and it has been tried, but it can work if done correctly. If it’s efficient and non-intrusive, it could make a massive difference around the tackle/breakdown area,” Erasmus wrote.

“The breakdown is so complicated for players, coaches, referees and fans alike. As a referee, you need five pairs of eyes to see what is going on at a breakdown – otherwise you are guessing.”

Scrums are an essential part of the game and Erasmus believes experts coming onto the field to help the referee could be a good move, with microphones on the set-piece gurus also helping to inform the audience.

“For international rugby, why not form a group of world-class scrummaging experts – former players or coaches – to serve as specialist scrummaging referees?” the Springboks director of rugby added.

“Get them in the gym so they are on and off the pitch quickly. It would be their only job, so they would have no impact on the rest of the game.”

“There are about 20 scrums a match so you could even put a microphone on them and link them up to the TV commentary team so the viewers understand what’s going on.”

Erasmus believes the ball can be in play for two extra minutes for every six kicks by clamping down on how long a goal kicker takes to complete his kick.

“We are regularly involved in matches where the kicker goes 20 seconds over the allowance,” Erasmus noted.

“If there are six kicks at goal in a match, that could waste two minutes of ball-in-play time. Put a countdown clock on the big screens and if the time runs out then they lose the kick.

“If we want to see more ball-in-play time then we need to make sure there is less ball-out-of-play time. If a team goes into a huddle before a lineout, stop the clock. If a guy goes down to tie his shoelaces or take a drink before a scrum, stop the clock.

“We could easily increase the ball-in-play time by between seven and 10 minutes by enforcing the laws as they are written and again no one will have to adapt to any law changes.”