Home British and Irish Lions Ranked: All Lions tours in the professional era 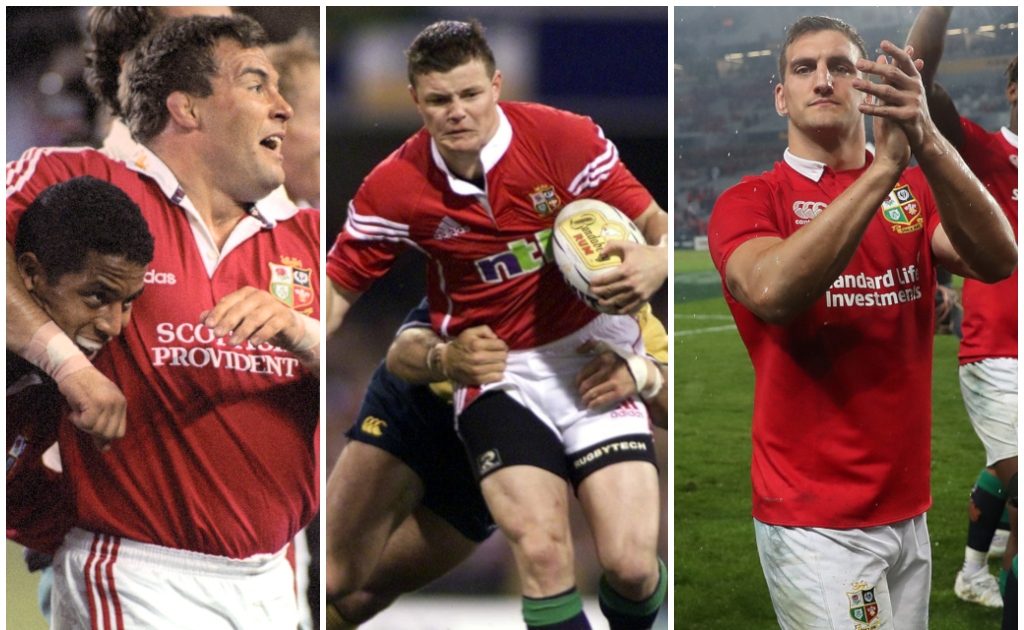 Following the Springboks’ series victory over the British and Irish Lions, features writer James While takes a look at all the Lions tours in the professional era.

The 2021 Lions tour to South Africa is already under deep criticism for its schedule and its delivery. A trip planned out of a pandemic, a visit shorn of any support in person and one wrapped in the deep controversy of Rassie Erasmus and his video antics. Some see it as an abject failure, but one that through the lens of the South African nation, a proud success.

There have been some wonderful tours and some not so great ones, and Planet Rugby ranks their interest and importance on a global rugby scale.

After his World Cup win in 2003, Sir Clive Woodward was always going to lead this tour. However, he was a coach who succeeded with England by challenging the norm. With the Lions, that norm was something that always needed to be embraced rather than ignored and put simply, the tour was a disaster.

With 47 players selected, a back room staff cast of thousands and some very average results on the pitch, Woodward put his faith in the men that won him a World Cup two years previously, packing the side with English players; some of whom were well past their sell by date.

The Tests were a disaster – a 3-0 loss to a Dan Carter-inspired All Blacks, including a 48-18 hammering in the second Test at Wellington, but in fairness to Woodward, the tour matches went well, with only a loss to a very powerful NZ Māori preventing a clean sweep.

It was hard to separate this and the 2001 tour to Australia, when you consider the pressure under which this series was delivered. However, Lions tours are about the spirit of rugby and the friendship of fans and both were in rather limited supply on this most recent trip.

It seems a tad churlish to rank it so low when a lot of good things came out of it and the series, in the final analysis, was incredibly close. But we return to our comment about the spirit of rugby; South Africa came to win at all costs and that included forcing every limit of gamesmanship. Whether it be 24-minute ball in play time for the match, whether it be coercing referee bias through social media manipulation or whether it be having support staff members cluttering the pitch in open play, the Springboks delivered the lot.

It was a tour where the shortened schedule didn’t allow a Lions Test team to truly emerge, and one that was defined by the bravery of Alun Wyn Jones and his remarkable comeback, one that perhaps demanded a better outcome than he got. There’s no doubt that, with the players he had at his disposal, combined with a few, like Joe Marler and Jonny Sexton that were left at home, the Lions should have done much better than they did.

Only time will tell how this series is judged, but when history erodes the passions and the emotions, we suspect the Lions will look back upon it with a little more pride than South Africa will, despite their worthy and deserved victory.

Defining moment: It’s hard to separate ‘Rassie’s Rant’ with rugby so we will stick to the one spilled aerial contest by the Lions, one magnificent pass from Willie le Roux and one run with afterburners by the brilliant Cheslin Kolbe, a man that defines the word matchwinner.

If ever there was the one that got away, this is it. A series where the Lions started brilliantly, looked absolutely magnificent in the first Test, led the second until a crucial incident, but should and could have won the last.

There’s always been questions on whether or not Graham Henry truly captured the ethos of the Lions, but with the ammunition at his disposal, the simple truth is there was no excuse for not beating a very good world champion team in Australia, albeit an Aussie side in player transition after a lot of their key personnel had retired post the 1999 World Cup.

A huge moment came in the 36th minute of the second Test when Nathan Gray wantonly took out the Lions superstar flanker, Richard Hill, a man at the peak of his incredible career and one that had put in a peerless man of the match display in the first clash.

It was also the first tour when players spoke openly about frustrations via the media – a very unedifying situation and one that backfired on Austin Healey when Justin Harrison, the man he nicknamed ‘The Plank’, rose and stole the very last lineout of the Tests with the Lions camped on the Wallaby line.

Defining moment: Brian O’Driscoll’s mazy run that led to the song ‘Waltzing O’Driscoll’ and sealed victory in the first Test.

A series win yet it’s ranked below a loss in 2009, we hear you say? Yes. Whichever way you cut it, rugby is a poor relation to other sports in Australia and to get a meaningful tour schedule is impossibly hard, with only three real rugby sides in the country. At the time of the tour, Australia were also going through a rebuilding process, were without a regular Test fly-half and could be considered the weakest side the Lions faced in the professional era.

Nevertheless, this was the first time Warren Gatland took the reins of the Lions concept that had endured three consecutive series losses and a tour of unity, happiness and great rugby. He put the derailed Lions back on the tracks and it was the beginning of his incredible reign as head coach.

Only Adam Ashley-Cooper’s last gasp try in the second Test saved the Wallabies from a total whitewash, but the rugby was attacking and compelling, with Israel Folau and Christian Lealiifano emerging as players with world-class reputations as a result.

But the Lions matched their pace and skill blow for blow, with George North and Jonathan Davies emerging into the brilliant form we were to see for many more Tests, and Sam Warburton announcing himself as the Lions skipper par excellence, a role he fulfilled with honour four years later.

Defining moment: As moments go, few will forget George North picking up Israel Folau and carrying him eight metres before dumping him on his back in the second Test.

🗓️ #OnThisDay in 2013: George North did this to Israel Folau! #LionsRugby pic.twitter.com/0YoDPgaY5a

Make no mistake, this series had the lot. It was on the cusp of the clean up of rugby – a moment in time where sheer brutality still existed within the game, and when players had got near the fitness and power profiles we see today.

We will rarely see again the absolute fusion of the old game and the new – a period when ruck offside was dealt with by the players, not the ref, and one were cheap shots and intimidation were everywhere you looked.

But it was also a tour of serious rugby excellence. From the power of Tendai Mtawarira in the scrum to the total match control of Fourie du Preez at half-back, the Springboks were brutal, brilliant and belligerent. However, save for a moment of madness in Test two from Ronan O’Gara, combined with some rather bizarre TMO interventions in the first encounter the tour result might have been so different and the matches were compelling – from the first to the last.

The Lions eventually came out winners in the third Test, and many players such as Mike Phillips, Rob Kearney and Tom Croft enjoyed impressive series.

It was a feast of rugby, a battle of brutality and one that time judges as one of the very best.

Defining moment: Phil Vickery won’t want to be reminded, but that very first scrum in Test one set the tone for the series, as the Lions tighthead went flying skywards courtesy of ‘The Beast’ – a man that went on to repeat the feat during the 2019 World Cup final.

As Lions tours go, nothing beats taking on New Zealand in their own backyard. This was a tour of scintillating rugby by two world-class sides with nothing left between them, either at the start or at the end of a drawn series.

It was also notable for the openness with which both teams approached the game; prepared to run the ball from all quarters whilst having some meaty encounters up front in the pack. The sheer strength of the midweek matches meant there was no hiding place for any of the Lions squad and two provincial losses and a draw underlined the quality of opposition they faced in every match of the tour.

It saw the emergence of world-class performers like Beauden Barrett and Maro Itoje and incidents galore; from the sending off of Sonny Bill Williams to the rather comedic call by Romain Poite at the end of the third Test that saw All Black legend Kieran Read speechless with anger when Poite overturned his own penalty call in the 78th minute for accidental offside by Ken Owens to give the All Blacks a scrum. Owen Farrell’s goal kicking was an amazing asset to the Lions and he missed just two kicks in the entire Test series

However, the sides featured some greats of the game at the peak of their powers and few series have ended so close and so tensely managed.

It was a joy to witness and one of the greatest Lions tours.

Defining moment: It wasn’t his finest personal hour, but nobody can deny that Sonny Bill’s red card in the second Test was the turning point of the series.

This tour produced the blueprint for professional rugby as we know it.

It had the lot: a long form series with 13 matches, two of the greatest Lions Test performances in the modern era, the emergence of all-time greats of the game like Keith Wood, Richard Hill and Lawrence Dallaglio, and to cap it all, it produced Living With the Lions. Released on Christmas Day it’s the often copied but never equalled behind the scenes video that most fans had worn out by Boxing Day!

SA Sports Illustrated said: “The British Lions arrived in South Africa rated – by their own media, South African media and supporters – as nothing more than rank underdogs. A nice bunch of blokes who were making a bit of history and, in so doing, winning friends rather than matches”.

Martin Johnson commented after the first Test that “nobody gave us a chance, perhaps they will now” and he was right, as against all odds and the run of play, a Lions side, inspired by the greatest centre partnership in their history, overcame a rampant Springbok side in Durban to secure the series.

From the embers of the tour, the England 2003 world Cup side saw their genesis and also the emergence of Hill, Neil Back and Dallaglio as one of the greatest back-rows in Test history, whilst Ireland, under Keith Wood, moved on to become a real rugby force and the British and Irish Lions inspired a generation to play rugby.

To paraphrase Jim Telfer, this was rugby’s Everest and is undoubtedly the benchmark tour of the professional era.

Defining moment: We are going to cheat a little here as there’s two moments that are immortalised in rugby: John Bentley’s 85m weaving try versus Gauteng Lions followed by Scott Gibbs crashing collision that left Os du Randt wondering what day it was. Urban myth suggests Gibbs followed up the hit with ‘Get up you fat so and so’, an attitude that defined the play of the powerhouse Welsh centre.