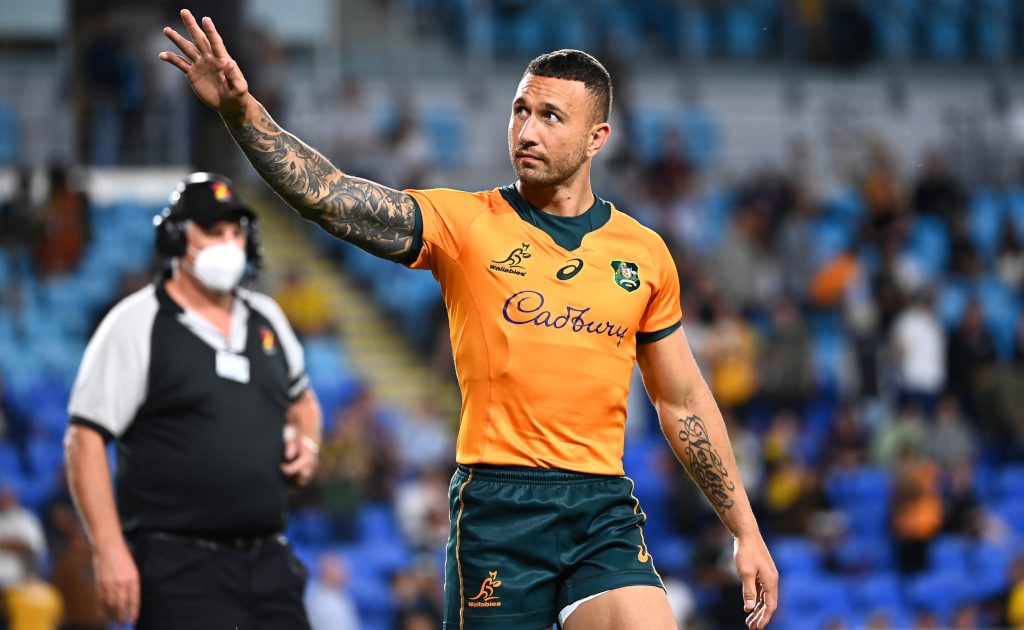 The Wallabies have confirmed that star fly-half Quade Cooper will miss their tour to the northern hemisphere.

Cooper was initially set to be a part of the squad but has decided to opt out after his Japanese club side, Kintetsu Liners, was reported to have expressed reservations about him going.

He joins two other Japan-based players, Samu Kerevi and Sean McMahon, in deciding to withdraw from the group.

Noah Lolesio has been called up as the 33-year-old’s replacement while Racing 92’s Kurtley Beale has also been brought into the squad.

Rugby Australia are allegedly fuming with the Top League trio, who have potentially hampered their international futures by opting out, but head coach Dave Rennie took the philosophical approach when speaking to the media.

“He obviously wanted the blessing of the club, maybe some flexibility around the tour dates but in the end, I think he felt he needed to be there to support his club about to head into their season,” Rennie told reporters.

“He’s made the decision that’s best for him and we’ve moved on.

“It’s his primary employer isn’t it? We want guys who are desperate to be Wallabies and Quade says he is but he’s torn. I think if he had the blessing of the club, he would have come but he hasn’t.”

Rennie would not be drawn on whether Cooper, Kerevi and McMahon had hampered their future selection chances by failing to commit to the national team.

“I guess that’s a bit of crystal ball going on there,” he said.

“Again it’s really going to depend on what our policies are going to be beyond this year for a start.

“We’ve got some boys based in France who are going to play in this series as well, then we’ll look at what the future looks like. So it may be irrelevant based on whatever the plans are going forward.”

As one door closes, another one opens with Lolesio handed an opportunity to showcase his talents on the biggest stage once again.

The Brumbies youngster made his international debut last year and also featured in the early part of this season.

However, after some disappointing displays for the Wallabies, Cooper took his place in the starting line-up before James O’Connor returned from injury.

O’Connor’s recovery meant Lolesio was jettisoned from the 23 completely, but Rennie has confidence in the 21-year-old’s ability.

“He’s played a lot of footy with us and understands the structure, he can slot in seemingly,” he said.

“He’s been doing a lot of training, been training every day. His body is great and he’s keen as. We’ll get him on the plane and soon as we can get the approbate paperwork sorted.

“If we thought Quade wasn’t going to travel, Noah would have come.”

Beale, capped 92 times by Australia, is another to return to the fold. He is called up for the first time since the 2019 World Cup and will provide cover for the full-back jersey.

“We get a chance to look at Kurtley in our group and get an understanding of how he will fit in from a cultural and rugby perspective,” Rennie added.