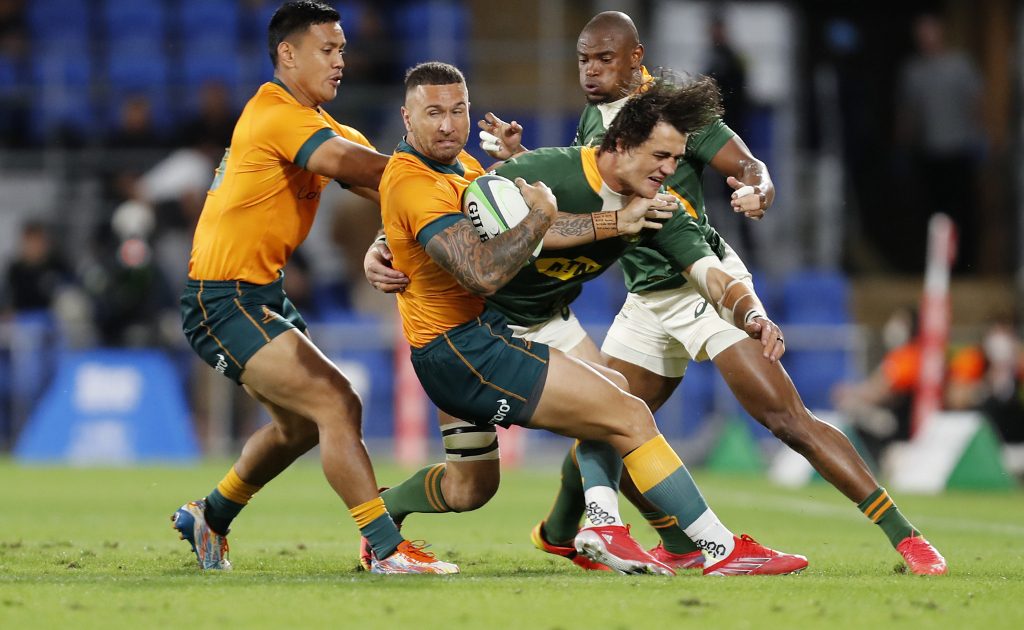 A late penalty from Quade Cooper secured a 28-26 Rugby Championship win for the Wallabies against the Springboks on the Gold Coast on Sunday.

In a hard-fought and tightly contested encounter, the result was in the balance until the dying moments but Cooper held his nerve to slot a difficult goal-kick, after the Boks’ pack were penalised for illegal scrummaging.

There were some strong carries and big hits during the early exchanges and the sides were level at 3-3 after Pollard and Cooper traded penalties inside the opening 10 minutes.

Shortly afterwards, the Springboks regained the lead when Pollard succeeded with his second three-pointer off the kicking tee, after Angus Bell dropped his bind at a scrum.

However, things went pear-shaped in 16th minute for the world champions when they lost the services of their captain, Siya Kolisi, who was yellow carded for a dangerous tip tackle on Tom Banks.

And with a one-man advantage, it wasn’t long before the Wallabies breached the Boks’ much vaunted defence. Samu Kerevi did the damage with a superb line break before throwing a long pass to Kellaway, who stepped past a couple of defenders before crossing for the opening try.

Shortly after Kolisi returned to the field, Pollard stabbed a teasing grubber kick through behind Australia’s try-line but although Lukhanyo Am gathered the ball, he lost possession while trying to dot down.

Despite that setback, South Africa soon had a numerical advantage of their own when Matt Philip was sent to the sin-bin for collapsing a lineout drive close to his try-line. Shortly afterwards, the Boks launched a lineout drive on the Wallabies’ five-metre line from which Mbonambi went over for his five-pointer.

On the stroke of half-time, Bell made up for his earlier indiscretion at scrum-time when he put pressure on Frans Malherbe at the set-piece and the Bok front-row was soon penalised, with Cooper succeeding off the kicking tee to give Australia a deserved 19-11 lead at half-time.

The Springboks made the brighter start to the second period and spent most of the early stages of the half camped in Wallabies territory. They could not breach Australia’s defence though but narrowed the gap to five points courtesy of another Pollard penalty in the 46th minute.

Five minutes later, the Boks were reduced to 14 men again when Willie le Roux received his marching orders for a deliberate knock down while the Wallabies were on the attack and Cooper slotted the resulting penalty which gave his side a 22-14 lead.

The Boks needed a response and that came shortly after Folau Fainga’a received a yellow card for a no-arms tackle on Ox Nché, with South Africa soon on the attack at a lineout deep inside Wallabies territory. They had the Wallabies on the back foot with a strong drive from which Marx scored and Pollard added the extras which meant the match was evenly balanced with Australia holding a slender 22-21 lead.

Two minutes later, the Wallabies extended their lead when Cooper succeeded with his sixth penalty, after Jasper Wiese was blown up for holding onto the ball on the ground.

Despite that setback, the Boks did not panic and in the 72nd minute Marx went over for his second try – once again off a lineout drive but, crucially, Damian Willemse was off target with his conversion attempt.

That proved costly as Cooper showed his class in the game’s closing stages when he slotted the match-winning penalty, sparking scenes of jubilation in the home camp.