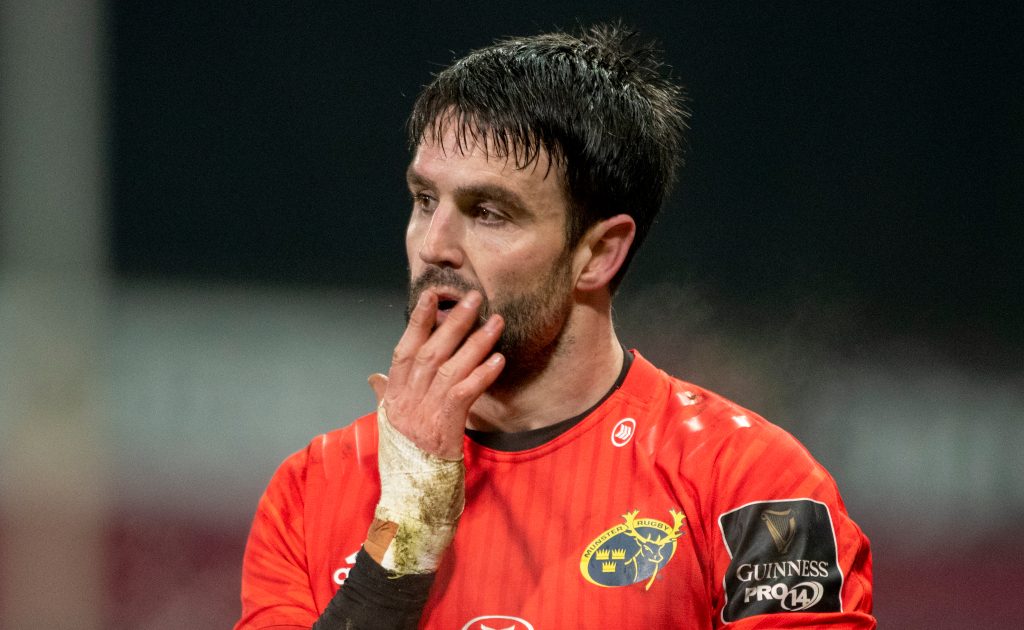 Conor Murray’s brace helped Munster to their first victory over Leinster since December 2018 as they began the PRO14 Rainbow Cup with a stellar 27-3 success at the RDS.

There was plenty of niggle in an error-strewn first half which ended 10-3 in Munster’s favour. Joey Carbery tagged a penalty onto Murray’s fourth-minute score, while replacement David Hawkshaw kicked Leinster’s points.

Much closer to full-strength than their arch rivals, Munster came through Stephen Archer’s sin-binning unscathed. There was no way back for Leinster after another Carbery penalty, Murray’s second try and a 71st-minute penalty try.

With the hosts resting a number of players ahead of next week’s European semi-final against La Rochelle, this strong Munster selection were quietly fancied to reverse last month’s PRO14 final defeat.

Injuries before kick-off had already left Leinster without Caelan Doris and Ciaran Frawley, and Harry Byrne’s early departure brought Hawkshaw on at fly-half. The academy youngster nailed a ninth-minute penalty to stem any nerves.

Both sides were guilty of giving away cheap possession but, with CJ Stander, Jean Kleyn and Tadhg Beirne all prominent, Munster were winning the collisions.

As they pressed for a second try, a TMO review landed prop Archer in the bin for use of his studs on James Ryan at a ruck. However, O’Mahony stole the subsequent line-out and Carbery punished a Scott Penny infringement with three points.

Hawkshaw missed a penalty from a tight angle just before half-time and Leinster’s try-scoring radar was off early in the second half. A crucial turnover penalty, won by Niall Scannell and Jack O’Donoghue, thwarted the PRO14 champions.

Carbery soon kicked Munster into a 13-3 lead after being tackled off the ball by Ryan Baird. When Leinster finally got James Lowe and Garry Ringrose in full flow, De Allende – the player of the match – slammed the door shut with a turnover.

The result was effectively sealed when Murray dived over from a 61st-minute ruck, capitalising on a powerful De Allende carry and some nice interplay between replacement Gavin Coombes and Chris Farrell.

Carbery’s conversion widened the margin to 17 points and, as Munster comprehensively ended a run of six straight losses to Leinster, a well-executed maul earned them a penalty try. Leinster debutant Cormac Foley was sin-binned for an illegal collapse.

Ospreys began their Rainbow Cup campaign with a bonus-point 36-14 victory over the Cardiff Blues at the Liberty Stadium.

Two tries from Ifan Phillips and further scores from Keiran Williams, Matthew Aubrey, Sam Cross and Sam Parry along with six points from the boot of Josh Thomas got the Ospreys off to a winning start.

Phillips opened the scoring for the Ospreys after eight minutes, with the hooker powering over from short range thanks to a well-worked driving line-out.

A sizzling break from left wing Matthew Protheroe from inside his own half sparked the hosts into life. But the attack came to nothing as Dan Evans was knocked into touch by Alun Lawrence.

Ospreys extended their lead after 31 minutes with inside centre Williams touching down. Cardiff second-row Ben Murphy charged down Aubrey’s box kick but wing Jason Harries failed to take the ball, with Protheroe pouncing before putting Williams.

And Ospreys took a commanding 19-0 lead into the interval when Morgan Morris reacted quickly to Ben Thomas’ charged down kick, drawing his man to put Aubrey over with Josh Thomas again successful with the conversion.

Ospreys were dealt a blow in the early stages of the second half when Wales star George North was helped off the field after falling awkwardly, injuring his right knee.

F-T: Ospreys 36, Cardiff 14. A pretty clinical performance from the home side, who cross for six tries, with their driving lineout a potent weapon. But the big concern is the injury to George North.

Ospreys secured their bonus-point try after 48 minutes when Phillips smashed his way over the line from short range for his second score, with the home side’s pack bullying their Welsh rivals.

Cardiff were also reduced to 14 men with tighthead prop Keiron Assiratti sent to the sin-bin for illegally sacking a driving line-out.

It took Cardiff 63 minutes to score their first points of the game and it came courtesy of inside centre Llewellyn, who hit a tremendous line to gallop in unopposed from 35 metres out.

But Ospreys hit straight back with a period of sustained pressure in Cardiff territory. After going through the phases a terrific offload from Josh Thomas put Cross over for their fifth try.

To their credit, Cardiff refused to throw in the towel and scored an impressive consolation try, with Llewellyn hit another gorgeous angle to put replacement scrum-half Bevan over.

But they ended the game with 14 men as Jason Harries was sent to the sin-bin for another driving line-out infringement, with Sam Parry crossing from short range for Ospreys’ sixth try.

Earlier, Glasgow suffered a heavy defeat to Benetton in their opening match of the Rainbow Cup, beaten 46-19 by a team who failed to win a single match in the regular PRO14 season.

The Italians built on a pair of encouraging displays in the Challenge Cup by totally dominating the first half as a Monty Ioane try and two from Niccolo Cannone steered them to a 21-0 lead at the interval.

Glasgow were wasteful and had a Cole Forbes try disallowed around the hour mark following a successful captain’s challenge – one of the new laws introduced for this competition.

Toa Halafihi and Michele Lamaro went over before Forbes finally got the visitors on the board after running the length of the pitch following a goal-line drop out.

Gianmarco Lucchesi got the home side’s sixth try of the afternoon before Ian Keatley and Nick Grigg crossed for consolations.

Danny Wilson’s men must now lift themselves ahead of home and away fixtures against Edinburgh, while Benetton face a pair of derby clashes of their own against Zebre.