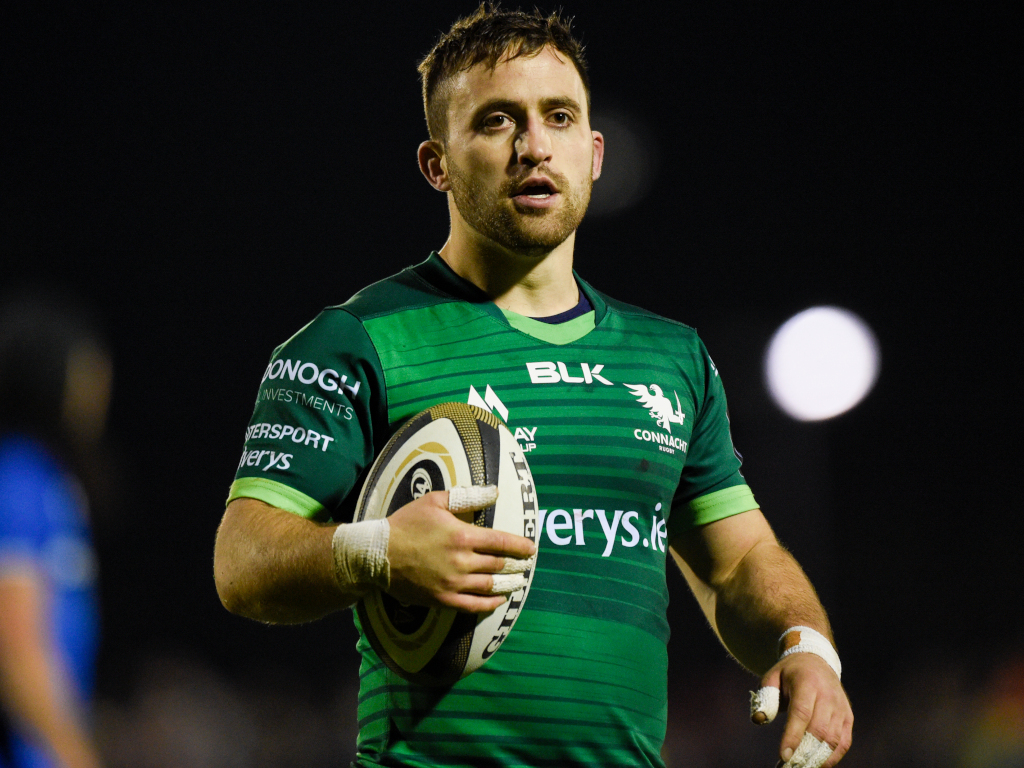 A last-gasp try from replacement wing Peter Sullivan gave Connacht a dramatic 26-24 victory over Ulster at Kingspan Stadium in the Rainbow Cup’s opening round.

Using the captain’s challenge law introduced for this competition, Connacht, with their bench making a crucial impact, came back from what seemed certain defeat to work the winning score with the clock in red.

That was after Ulster appeared to have secured the spoils for themselves with a late Dave Shanahan try in this hard-fought Irish derby.

It was only the second time that Connacht have won in Belfast since 1960 and will have given a strong Ulster side, who had Iain Henderson back as well as long-term absentee Will Addison, a wake-up call ahead of next weekend’s Challenge Cup semi-final at Leicester.

Scrum-half Caolin Blade scored twice in an eye-catching display from the Connacht number nine while, for Ulster, the return of Addison after over a year out also saw him look sharp.

After Blade had a score ruled out for an apparent double movement – a call which could have resulted in the newly-trialled captain’s challenge but was not utilised – Ulster got on the scoreboard after 23 minutes through Jacob Stockdale, who profited from John Cooney’s long pass. The scrum-half failed to convert from the touchline, though.

It was all Ulster now and just before the half hour, soon after Nick Timoney was held short of the line, the home side put a penalty into the corner with Rob Herring dotting down from the maul to put Dan McFarland’s side in the lead.

Cooney also converted to put Ulster 12-7 ahead and there were no further scores in a frenetic first half with both sides throwing everything into attack.

Ulster claimed their third try just four minutes into the second half, Billy Burns getting over in the corner after a superb break by James Hume nearly put Cooney away, though that led to Carty’s yellow card for a deliberate knock-on.

Cooney missed the difficult conversion but Ulster were now 10 points in front.

Connacht, despite being down to 14 men, struck back however and after a powerful run from impressive replacement Abraham Papali’i, Blade scorched over with Tom Daly converting.

Connacht then came again with Blade wriggling over from close range after Ultan Dillane was held short. Daly converted and the westerners now led 21-17.

But, in a dramatic finish to the match, Ulster reclaimed the lead when replacements Michael Lowry and Shanahan combined with the latter crossing in the 73rd minute for a try that was converted by Lowry.

There was still another twist in the tale, however, and Connacht snatched victory at the death when Sullivan, with a penalty coming, pounced on a grubber after the visitors had used their captain’s challenge in the closing moments.

Edinburgh kick off Rainbow Cup season with win over Zebre

Matt Currie scored a try on his first Edinburgh start as Richard Cockerill’s side claimed an opening PRO14 Rainbow Cup triumph courtesy of an improved second-half display against Zebre.

The Italians deservedly led at the break at Murrayfield but a youthful Edinburgh team secured a 24-18 victory after dominating the second half.

The impressive Eroni Sau notched the first try of the game for Edinburgh before Andrea Lovotti replied, and Carlo Canna’s kicking had Zebre six points ahead at the break.

But the hosts scored tries from skipper Luke Crosbie and 20-year-old centre Currie as the home team pushed their opponents back for the bulk of the second half, before Johan Meyer bagged a last-gasp consolation try.

Cockerill named a squad with an average age of 24, with 19-year-old Ben Muncaster making his debut among a raft of young Scottish-qualified players.

Canna bagged an early penalty before Sau struck in the 12th minute following a fine team move. Mike Willemse broke off a maul following a line-out on the right and Edinburgh worked it out to the opposite flank where Blair Kinghorn fed Sau to go over in the corner.

Fly-half Canna kicked a penalty and was generally dictating play, while number eight Renato Giammarioli was making serious headway through the Edinburgh ranks.

The visitors got their first try in the 26th minute when Lovotti powered over from close range after a penalty kick into the corner. Canna put them 13-7 ahead.

Edinburgh were a changed side after the break and produced a controlled display with the penalty count going in their favour.

Sau was instrumental in Edinburgh’s second try, bursting past six defenders after getting the ball from Crosbie following a line-out. Jamie Hodgson was just held up but Crosbie went over.

Kinghorn was stopped near the line and Sau came close again after a pass over the top from Chamberlain, but Pierre Bruno’s tackle put him into touch near the corner.

Currie burst on to Chris Dean’s close-range pass and over the line to extend the lead and could have had another try if Damien Hoyland had released him.

Chamberlain added a late penalty to his three conversions and the clock had gone past the 80-minute mark when Meyer finished off a slick breakaway to reduce the deficit.