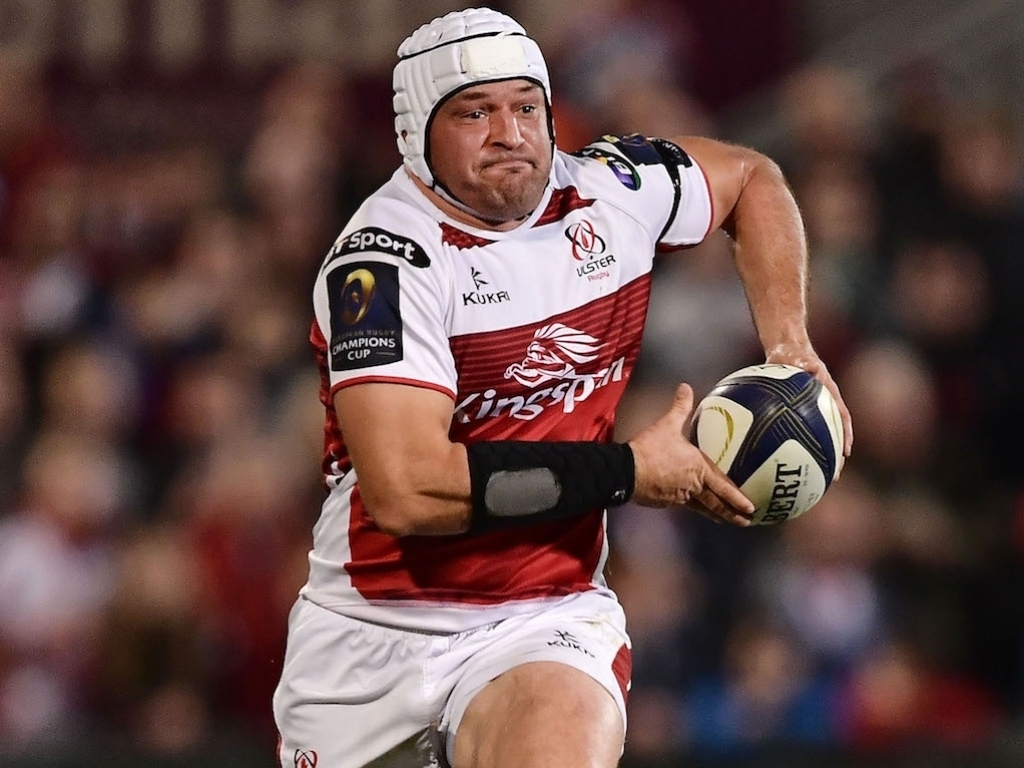 Four games take place in the PRO14 on Saturday, including two derbies, as Ulster host Leinster and Cardiff Blues make the trip to Scarlets.

Rory Best will become just the fourth Ulster player to reach 200 caps, as he is named in the starting XV for Saturday's clash.

The game will be Best's first start of the season, following his return from injury as a replacement against La Rochelle last Sunday.

Either side of Best, Rodney Ah You also comes into the team at tighthead prop, with Callum Black completing the front row.

Iain Henderson will continue to captain the side, as he shifts from flanker to lock, with Alan O'Connor retaining his place in the second row.

Jean Deysel, who missed last week's Champions Cup outing due to injury, returns at number eight, with flankers Sean Reidy and Chris Henry selected as the other loose forwards.

Aaron Cairns will make his first senior start as the Ballynahinch RFC clubman is named at scrum-half. He will be partnered at half-back by Australian international Christian Lealiifano.

The Irish-capped duo of Stuart McCloskey and Luke Marshall are selected in midfield, with Jacob Stockdale, Tommy Bowe and Charles Piutau making up a potent looking back three.

Meanwhile, Leinster head coach Leo Cullen is able to recall a number of players from injury including British & Irish Lion Rob Kearney and Seán O’Brien for the Round 7 clash.

Kearney comes into the number 15 jersey with Adam Byrne on the right wing and Dave Kearney on the left.

There is also a return from injury for Rory O’Loughlin who joins fellow St. Michael’s past pupil Noel Reid in the centre.

Jamison Gibson-Park and Ross Byrne start as the half back pairing for the trip to the Kingspan.

In the pack Jack McGrath and Tadhg Furlong start at loosehead and tighthead respectively while James Tracy wins his 50th cap at hooker.

Devin Toner is joined in the second row by James Ryan.

In the back row Dan Leavy starts his first game back from injury after impressing off the bench last week in Scotstoun, while Jordi Murphy also comes back into the side at open side flanker.

Finally O’Brien is back from a calf injury to captain the side from the base of the scrum.

On the bench, having played for 40 minutes two weeks ago with the Leinster ‘A’ team, there is a first senior involvement of the season for Richardt Strauss having recovered from a knee injury.

Cullen also gave an injury update on a number of other players not involved this weekend.

Both Barry Daly and Josh van der Flier had procedures this week after both suffered syndesmosis injuries against Glasgow last weekend.

There was also an update on both Robbie Henshaw and Johnny Sexton who were both not considered for selection due to knocks taken in training during the week. However neither player is a long term injury concern.

There are five changes in the starting line-up of Zebre from the defeat to Pau in the European Challenge Cup.

Three changes come in the pack with a totally brand new second row unit as well as Sami Panico in the number one jersey.

In the backs, however, the two Padua born boys Mattia Bellini and Matteo Minozzi regain selection after recovering from injury.

Meanwhile, the experienced fly-half Fred Zeilinga will be making his PRO14 debut for the Cheetahs when he sets foot to field after being sidelined due to an injury.

He sustained a hip injury in July this year during Super Rugby match against the Kings in Port Elizabeth.

Number eight Jasper Wiese has been called up from the Currie Cup team and will be playing in first PRO14 game on Saturday.

In the Benetton matchday 23, Alessandro Zanni comes back after exactly one year since his last appearance.

The full-back spot goes to Jayden Hayward, Angelo Esposito and Luca Sperandio line up on the wings while Ignacio Brex and Alberto Sgarbi form the midfield combination.

The half-backs are Tito Tebaldi at scrum-half and Ian McKinley at fly-half.

The front row will consist of Federico Zani, Luca Bigi and Simone Ferrari.

Marco Fuser and captain Dean Budd pack down in the engine room while the back row sees Francesco Minto, Abraham Steyn and Robert Barbieri completing the XV.

Meanwhile, the Edinburgh team selection includes eight changes to the side who claimed a bonus point victory away to Krasny Yar in the European Challenge Cup last weekend.

At full-back, Blair Kinghorn makes his 50th start for the club after scoring 16 of Edinburgh’s 73 points last weekend. A revamped wing pairing sees Dougie Fife and Jason Harries return to the starting XV for the trip to Italy.

In the midfield, James Johnstone continues at outside centre following his impressive outing against Krasny Yar. The Scotland Sevens man is joined by Phil Burleigh, who returns to the side after missing Edinburgh’s last two fixtures. Jason Tovey and Sam Hidalgo-Clyne once again link up at half-back.

In the front-row, WP Nel continues at tight-head as Edinburgh search for their fourth win on the bounce. The experienced international will pack down alongside Stuart McInally and Darryl Marfo; both recent inclusions in Scotland’s Autumn Test squad.

In the second-row, Fraser McKenzie skippers the side on his first outing as club captain. He is joined by Ben Toolis who returns to the fray after missing the trip to Moscow.

The only alteration to an otherwise unchanged back-row sees Hamish Watson return to the starting XV following a three-week layoff due to injury. The Scottish international is joined by Cornell du Preez and Luke Crosbie, who makes his second consecutive start in the black and red.

Scarlets centre Scott Williams will captain the Welsh region on Saturday night in their first home derby of the season.

Williams is the only personnel change to the backline that took to the field against Bath in the European Rugby Champions Cup last week, with Jonathan Davies moving to the replacements bench.

In the pack head coach Wayne Pivac, who has this week penned a new deal with the Scarlets, has made two changes. Both changes are in the front row with Ryan Elias replacing Ken Owens at hooker and Werner Kruger in for tighthead prop Samson Lee.

Focus returns to the PRO14 after a fortnight of Champions Cup action with the Scarlets hoping to keep their winning momentum alive in the championship. Cardiff Blues will be in high spirits and full of confidence after two victories in the Challenge Cup.

The Scarlets achieved the season’s double over Cardiff Blues in 2016/17 and will be keen to repeat that feat with Blues’ only victory in their last eight visits to Parc y Scarlets was back in April 2016.

Looking ahead to Saturday’s PRO14 clash Pivac went on to say; “We’ve now got a big game against Cardiff Blues to look forward to. They’re always tight affairs and usually physical encounters. We’ve reprogrammed ourselves if you like back into the PRO14 and we’ll hopefully see some good weather and we can play some good footy.

“We know the individuals in their side, they know our guys really well, the coaches know each other. It makes for an exciting game and in our calendar it’s always one that we all look forward to.”

Meanwhile, Cardiff Blues have made five changes to their side.

The Blues go into the Welsh derby at Parc y Scarlets on the back of consecutive European Challenge Cup victories against Lyon and Toulouse.

Kristian Dacey continues to skipper the team and four of the changes come in the pack. Brad Thyer and Dillon Lewis complete the front-row, while Seb Davies and Olly Robinson step up from the bench at lock and flanker respectively.

The only other change comes in the back-line where Willis Halaholo returns to form a familiar midfield partnership with Rey Lee-Lo.

Cardiff Blues head coach Danny Wilson expects a formidable challenge from the Llanelli-based outfit but he insists his side can go into the encounter with confidence.

Wilson said: "On the back of four wins out of five, culminating with a great win out in Toulouse, we can go there with confidence.

"It was a good performance (Toulouse) and a very pleasing result away from home in a venue like that and against a multi-million-pound squad. To come out of Europe with two wins is great.

"However, the Scarlets are the league champions and they're on their own patch so it is probably the toughest fixture of the season so far.

"We've had a couple of headaches in terms of selection following the performances in the last five weeks but we are still without a number of top professionals like Gethin Jenkins, Ellis Jenkins, Gareth Anscombe and Sam Warburton."

Former Scarlets Matthew Rees, Josh Turnbull and Steve Shingler all line up on the bench, while Lloyd Williams will make his 150th appearance if he is called into action.