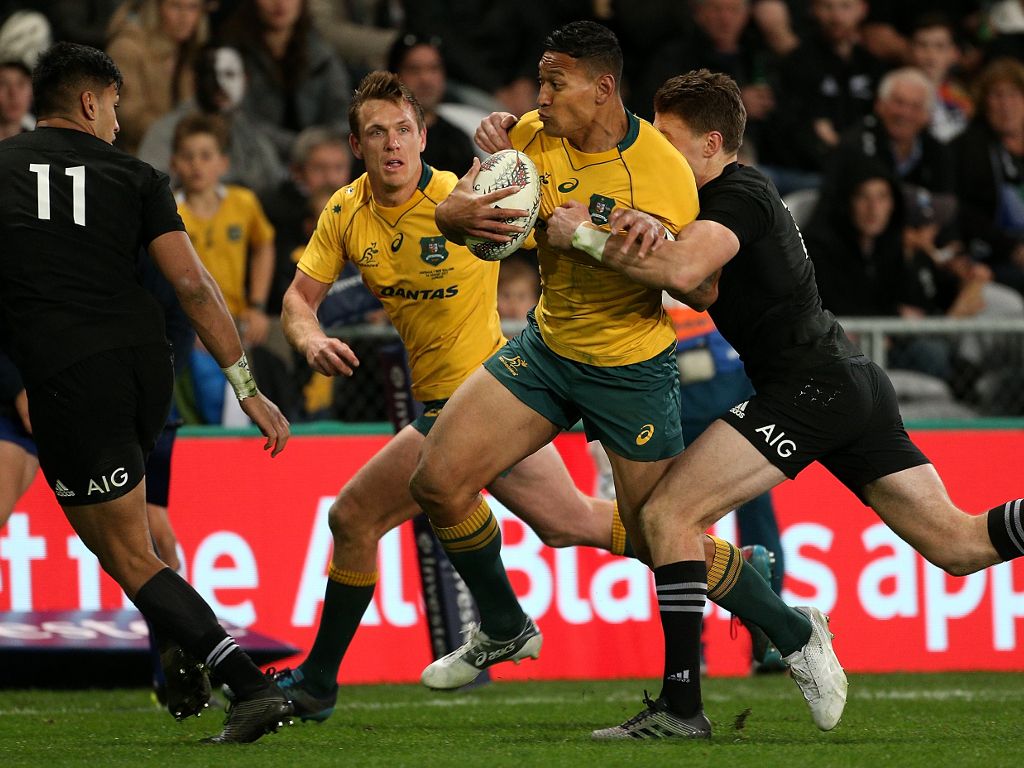 Arch rivals Australia and New Zealand resume hostilities when they face off in this year’s Rugby Championship opener in Sydney on Saturday.

This fixture also doubles up as a Bledisloe Cup clash and for the first time in years Australia head into this trans-Tasman encounter with a semblance of confidence after claiming a 23-18 victory over the world champions when these sides met in their previous Bledisloe match, in Brisbane last year.

That success means Australia will fancy their chances of beating New Zealand, although the All Blacks are a formidable force wherever they play in the world.

That was best illustrated in last year’s corresponding fixture when the world champions blew the Wallabies away in the first half in Sydney before eventually securing a 54-34 victory, which paved the way for further Bledisloe Cup success after a 35-29 win in Dunedin.

However, the victory in the third Bledisloe game was an important one for Australia as it ended a seven-match losing streak against New Zealand which stretched back to 2015. If the Wallabies want to be victorious again, they can’t afford a repeat of that first half performance in Sydney last year when the All Blacks led 40-6 at half-time.

It is easier said than done but much will depend on senior players like Michael Hooper, David Pocock, Tatafu Polota-Nau, Israel Folau, Bernard Foley, Will Genia and Kurtley Beale, who all have to be at their best to give the All Blacks a run for their money.

Folau is a real danger on attack and has scored six tries in 15 games against New Zealand. Just four players have scored more tries against the All Blacks – Adam Ashley-Cooper (9), David Campese (8), Bryan Habana (8) and Matt Burke (7).

Meanwhile, New Zealand are boosted by the return of experienced campaigners in captain Kieran Read and lock Brodie Retallick, who both missed their team’s 3-0 series whitewash of France in June.

This match will be a momentous one for Retallick’s fellow second-row Sam Whitelock, who will become just the eighth All Black to play 100 Tests when he takes to the field in Sydney.

It is fitting that Whitelock will be partnered by Retallick as they will be starting their 47th Test as a locking partnership – only Robin Brooke and Ian Jones have combined for more Tests for the All Blacks.

Head coach Steve Hansen highlighted the importance of this fixture to his side and expects another tough challenge from Australia.

“We’re all excited at what is shaping up to be another classic Bledisloe Cup encounter here in Sydney on Saturday night,” he said.

“We know that we have to earn the right to perform by preparing well and taking each moment that arises, and that mindset has been reflected in our preparation this week, which has been very good.

“The Bledisloe means a lot to this team and we have the opportunity to show just how much on Saturday night. As far as we’re concerned, neither team currently has possession of the cup and if we want it, we’ve got to front up and take it.”

For Australia: Wallabies captain Michael Hooper is one player who will be determined to hit the ground running after missing the latter part of the Waratahs’ campaign due to a hamstring injury. The 26-year-old has been rushed into his country’s run-on side for this encounter and, apart from his role as the team’s leader, Hooper will also pose a huge threat on the ground as his partnership with David Pocock at the breakdown is sure to have a big influence on this match. Hooper made headlines last week when he became the first Australian to sign a new five-year contract since 2007 which highlights how highly he is rated in his country.

For New Zealand: Two-time World Rugby Player of the Year Beauden Barrett will be keen to impress and determined to prove that he is still the All Blacks’ premier fly-half. The emergence of Richie Mo’unga as a player with big match temperament during the Crusaders’ successful Super Rugby run has led to calls for him to be elevated to the run-on side at Barrett’s expense, but All Blacks coach Steve Hansen still believes the incumbent pivot is the right man to wear the number 10 jersey. A commanding display from Barrett will keep his detractors at bay and justify Hansen’s faith in him.

Head-to-head: In Reece Hodge and Jack Goodhue, Australia and New Zealand have two promising centres who are both trying to cement their places in their countries’ run-on sides. Both are aged 23 but Hodge is the more experienced of the two and has already played in various positions in the Wallabies’ backline. Hodge stole the show in the last Bledisloe Cup encounter in Brisbane last year when he landed a monster 53-metre kick which helped the Wallabies beat the All Blacks and he will be hoping to repeat those heroics this weekend. Meanwhile, Goodhue’s superb performances for the Crusaders earned him a spot in the world champions’ starting XV and he will be keen to replicate that form in this encounter.

Prediction: Like last year’s Bledisloe Cup clash in Brisbane there will be plenty of thrilling action and don’t be surprised if this match also goes down to the wire with the All Blacks sneaking in by a narrow margin. New Zealand to win by four points.