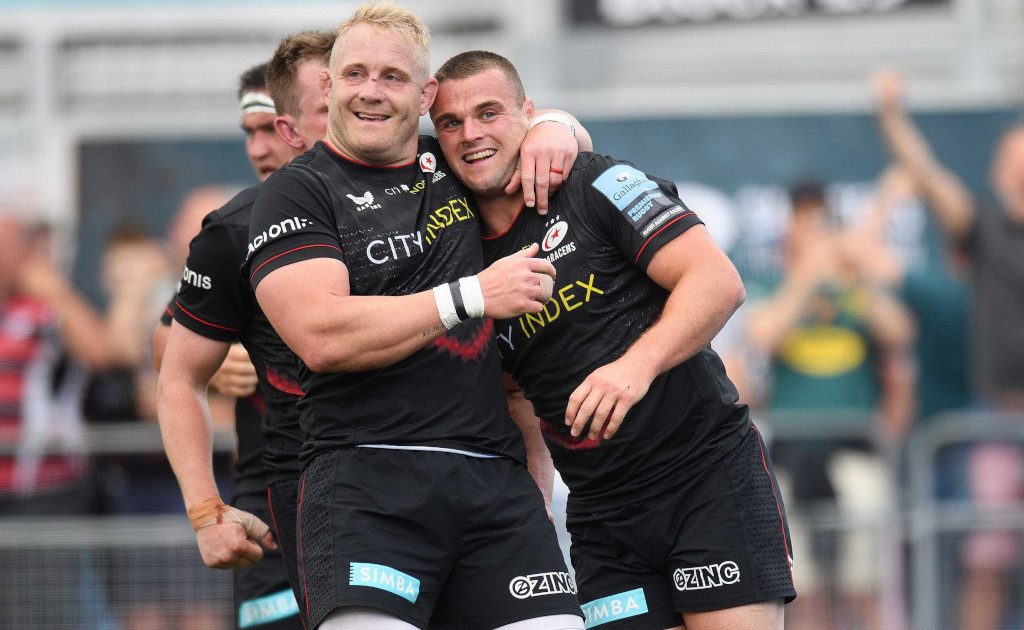 Saracens marked their Premiership return with another final following a 34-17 victory over Harlequins in a feisty London derby.

Just two years after being relegated for salary cap breaches, Mark McCall’s men will head back to Twickenham after they defeated the defending champions.

It was a fractious contest with four yellow cards in total – three for the hosts and one for the visitors – while there were also a number of scuffles, but fortunately the rugby did much of the talking.

Quins had started well, going 12-3 ahead thanks to Alex Dombrandt and Danny Care tries, but Sarries showed all their experience and power to claim an impressive win.

Ben Earl began the comeback before tries either side of the break from Nick Tompkins and Earl gave the hosts a 22-12 advantage.

Aled Davies and Cadan Murley then traded scores but Earl completed his hat-trick to rubberstamp the win and take them into the Premiership‘s showpiece event.

Saracens had to roll up their sleeves early on as Quins took a quick lead from Alex Dombrandt at the end of an imposing line-out drive.

Owen Farrell settled home nerves with a penalty after a promising attack by the hosts, who were then forced to weather a mini siege on their line.

South Africa centre Andre Esterhuizen was influential as Quins camped themselves in the 22, but the source of their second try was the genius of fly-half Marcus Smith.

Saracens’ problems began at the scrum when a shunt backwards saw referee Luke Pearce’s arm go up, but advantage was played and Smith reacted incisively by breaking a poor tackle by Farrell, evading Davies and Alex Goode before feeding Danny Care to score.

The exhilarating pace continued when Earl scrambled over after waves of attacks as Saracens issued an impressive response to slipping further behind.

A key moment arrived just after the half-hour mark when Joe Marchant had a try disallowed for knock on before Jack Walker was sin-binned for a high tackle on Farrell, who streamed blood as a result.

Pressure was now building on Quins’ line and once Maro Itoje had almost crossed, an overlap was ignored as Farrell slipped the ball out of a tackle for Tompkins to touch down.

More evidence for the tide turning materialised when Dombrandt dropped the kick off to the second half and Saracens pounced, working the ball to Earl to grab his second.

Walker was now back on the pitch but it made no difference as the home side ran in a fourth try, Farrell teeing up Vincent Koch for a bust through midfield with Davies present to finish.

Elliot Daly was sin-binned for a high tackle on Smith and Billy Vunipola followed him into the stands for a dangerous challenge on Esterhuizen as tension mounted amid a concerted Quins fightback.

Saracens were down to 13 men and they were breached by Murley in the 66th minute and just as Vunipola returned, Alex Lozowski departed for the same offence with seven minutes left.

They had the final say, however, when Earl completed his hat-trick from a line-out drive, ending Quins’ reign as champions.