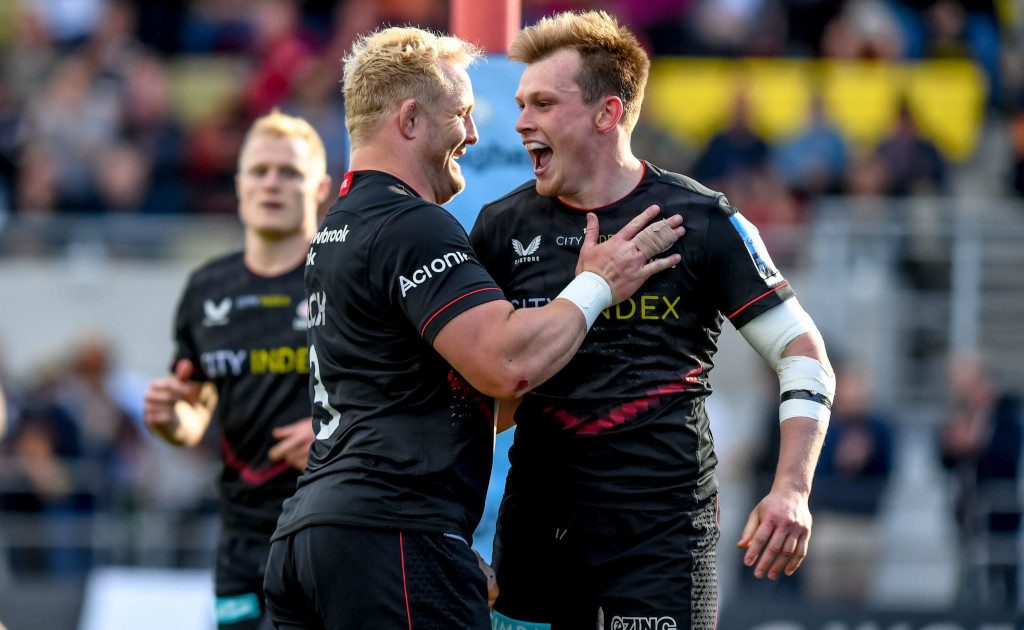 Saracens sealed a home game in the semi-finals of the Premiership after they produced a superb second half to defeat Northampton Saints 42-38 at StoneX Stadium on Saturday.

The Londoners controlled much of the opening period but lacked a clinical edge and as a result found themselves 10-9 behind at the break.

Evidently irked by their first-half profligacy, Mark McCall’s men were excellent at the start of the final 40 minutes and touched down three times in quick succession through Nick Tompkins, Alex Lewington and Theo McFarland.

McFarland completed his brace before the third quarter had elapsed and then Alex Goode effectively secured the win.

The game had gone for Northampton but they produced a remarkable comeback late on to pick up two potentially priceless points.

Rory Hutchinson crossed the whitewash before Tom James (twice) and Matt Proctor went over in the last 10 minutes to give them both a losing and try bonus-point.

It puts them on 70 points, two ahead of Gloucester, with a very winnable match against Newcastle Falcons to come in the final round of the Premiership campaign.

Farrell‘s second-minute penalty gave Saracens an early lead and that was the precursor for the hosts to dominate the opening passages of play.

They built up a long period of sustained pressure with some excellent ball-retention and forced Saints into conceding a number of penalties, one of which was knocked over by Farrell.

Farrell soon declined two further kicks at goal in favour of attacking lineouts but the visitors’ defence held firm to leave Northampton trailing 6-0 at the end of a one-sided first quarter.

Saints then suffered two setbacks in quick succession. First lock Alex Coles was yellow-carded for preventing Goode dashing away from a mark before his skipper Lewis Ludlam followed him into the bin for taking Farrell around the neck area.

Despite playing with 13, it was Saints who came closest to scoring in the next 10 minutes as the home side were uncharacteristically careless with their handling.

Coles and Ludlam still had not returned when Biggar put his side on the scoreboard with a penalty from near half-way but they were back on the field when Northampton stunned the home crowd with the first try of the game.

Freeman ran an excellent line to collect Mike Haywood’s well-timed pass before racing through a static defence. Biggar converted before Farrell kicked his third penalty to leave Saracens 10-9 behind at the interval.

It took Saracens only a minute of the second half to regain the lead when Tompkins split the defence with a clean break and when the ball was recycled the centre was on hand to break the line for the second time to score.

The home side now had the bit between the teeth and soon added a second. The dangerous Rotimi Segun burst away on a thrilling 40-metre run and when he was hauled down, a long pass from Farrell enabled Goode to provide Lewington with an easy run-in.

Northampton conceded their third try in less than 10 minutes when McFarland charged down a clearance from Alex Mitchell before collecting the rebound to score.

Saints were shell-shocked but regrouped to score their second try from Hutchinson before McFarland scored the try of the game when he intercepted Mitchell’s pass to outpace the cover on a 50-metre run to the line.

The game became increasingly open with Goode a try-scorer for Saracens before Saints staged a tremendous rally to score three converted tries in quick succession. Replacement James scored two of them with Proctor their final scorer.