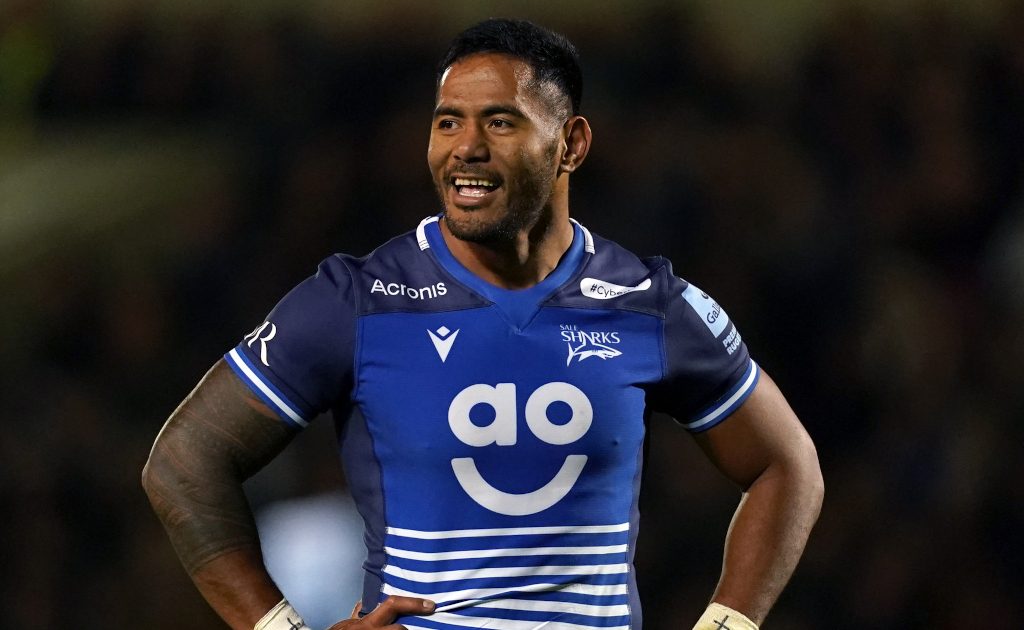 Manu Tuilagi’s return to the starting line-up helped Sale Sharks to a convincing 36-12 win over Worcester at the AJ Bell Stadium.

A Sam James score put the hosts on top early on in the game before the Warriors clawed their way back, going into the break 12-10 up.

But when Tuilagi crossed the white line in the second half, Sale remained on top and started to rack up points.

Arron Reed, who also scored in the opening period, completed his brace, while Curtis Langdon and Rohan Janse van Rensburg crossed the whitewash to seal a comfortable win which takes them closer to the top-four.

Having beaten league leaders Leicester and defending champions Harlequins over the past two weeks, confidence was high in the Sale camp.

Despite the blow of losing Lood de Jager to injury just before kick-off, the hosts started with intent and were ahead after two minutes.

It was all a bit too easy from a Worcester point of view as Rob du Preez gave James a simple run to the line for a 5-0 advantage.

The Warriors, now under the guidance of former Sharks boss Steve Diamond, showed excellent spirit to get back into the match, however. The home side aided their cause by giving away a number of needless penalties but Worcester created their opener impressively.

Youngster Fin Smith, who starred for the England U20s last season, delayed his pass superbly and sent Howe across the whitewash unopposed. The fly-half also converted to give his side the lead.

Sale were making far too many errors but they did manage to put one coherent move together when AJ MacGinty broke through and kicked ahead for the lightning quick Reed to finish.

Mistakes continued to hamper Alex Sanderson’s men, though, and when Faf de Klerk had his attempted clearance charged down, the visitors were back ahead as Annett went over.

Diamond’s charges had been aided by the wind in the first half, but with it against them in the second period, they were immediately penned back.

The Sharks messed up one opportunity due to a knock on but did not pass up their next chance as Tuilagi surged across the whitewash.

Sale now had the momentum, and after Perry Humphreys had been sin-binned for a cynical tackle on Reed, Langdon went over.

Raffi Quirke had played a key part in that score after making the off-load which sent Van Rensburg clear and led to Humphreys’ yellow card, and he continued to be influential moments later.

After Worcester had conceded another penalty, Quirke took a quick tap, passed to Cameron Neild and the back-row’s superb grubber through was collected and finished by Reed.

That try effectively sealed the win but the Sharks still had one final word as a brilliant move, involving Quirke and MacGinty, was finished off by Van Rensburg.

Paolo Odogwu saved Wasps for the second week in a row with a quick-fire double as Bath saw their seven-point lead crumble after finding themselves down to 13 men in a 41-24 Premiership defeat.

Wing Semesa Rokoduguni was sent off in the opening minute of the second half for a high tackle but Bath made light of his absence until 14 minutes from the end when Tom de Glanville saw yellow for a deliberate knock-on.

Wing Odogwu, who had won the match at Exeter with a try six minutes after the countdown clock had reached zero, took advantage of the extra space with two tries in as many minutes before a double from Alfie Barbeary made the scoreline flattering for Wasps.

Bath had not won away in the Premiership for 11 months, but after gifting Wasps an early lead they played on the front foot, prompted by Max Ojomoh, a young centre who showed why he is close to an England call-up.

Wasps had won the previous five Premiership meetings between the clubs but they did not pay their opponents enough respect after scoring a try 100 seconds in.

It came from a Bath line-out in their 22. The ball was thrown over Wales back-rower Taulupe Faletau, who was making his first appearance of the season, and seized by Robin Hislop.

The prop was held up on the line but Wasps moved the ball quickly and Charlie Atkinson’s long pass was taken by Josh Bassett who supplied Rob Miller with the scoring pass out of the back of his left hand.

Bath were struggling up front but were inventive with the ball in hand and took the lead after 10 minutes. Nathan Hughes charged through Gabriel Oghre’s tackle and Ojomoh’s delayed pass bought room for Tom Prydie on the right with Orlando Bailey mastering the wind to convert.

Wasps were stirred and after Dan Robson worked a 50-22, Biyi Alo forced his way over. When Ben Spencer earned Bath a 50-22, the line-out throw was ruled not straight but they were soon back in the lead through Faletau after Ojomoh glided away from Odogwu on the left.

Wasps went into the interval 17-14 ahead after Elliott Stooke was freed by Ben Morris, but 30 seconds after the restart Rokoduguni was sent off for a high tackle on Sam Spink which left the centre concussed.

But Bath scored next. Bailey jinked out of his own 22 and Hughes appeared through the ruck, charging towards the home 22 before chipping to the line for Spencer to pick up and score. Bailey converted from the left wing.

Wasps struggled to make their numerical advantage tell, playing from deep rather than for territory. Bailey extended Bath’s lead to seven points with a penalty but they cracked when De Glanville was sent to the sin-bin for denying Odogwu a try-scoring opportunity.

There were three conversions apiece for Jimmy Gopperth and Bailey.

Exeter bounced back after three successive defeats with a convincing 24-15 Premiership win over in-form Gloucester at Sandy Park.

Gloucester had claimed 24 points from their previous six Premiership matches but their limitations were exposed by a fired-up Chiefs side, who were the better team in all facets of the game.

Gloucester’s tries came from Freddie Clarke, Santiago Carreras and Charlie Chapman – the last two coming in the final 15 minutes when Exeter had a man in the sin-bin.

The hosts should have taken an early lead but with the line at his mercy, Don Armand fumbled a well-judged cross-field kick from Simmonds.

Minutes later, Simmonds launched another kick but this one was ill-directed and Gloucester were able to counter-attack in style with Ollie Thorley tearing past a couple of defenders to take his side into the opposition 22.

From there the visitors moved the ball wide before a well-timed pass from Kyle Moyle sent Clarke over for the opening try.

That score came against the run of play as the Chiefs dominated the opening quarter.

An elusive run from O’Flaherty was the catalyst for the Exeter forwards to bombard the Gloucester line. Kicks at goal were spurned as the hosts sought a try but despite the concession of a number of penalties, Gloucester kept their line intact to lead 5-0 at the end of the first quarter.

Gloucester then suffered an injury blow when Lloyd Evans had to be helped off with a leg injury to be replaced by Adam Hastings.

Almost immediately they suffered a further setback when Exeter hooker Innard finished off a driving line-out to bring the scores level at the interval.

Exeter would have been the happier as they turned round with the wind now in their favour after having had 78 per cent of the possession in the first half.

Eight minutes after the restart, Gloucester centre Billy Twelvetrees was yellow-carded for persistent team infringements and the Chiefs quickly capitalised as Schickerling drove over from close range.

The visitors changed four players in quick succession to try and reverse their fortunes but it made no difference as Exeter scored a third try when Woodburn had all the time in the world to collect a cross-field kick from Simmonds.

Twelvetrees returned from the sin-bin in time to see the home side score their bonus-point try when a clean break from Jack Maunder provided O’Flaherty with a simple run-in.

Exeter second row Dafydd Jenkins was then yellow-carded which allowed Gloucester to respond with two tries in quick succession from Carreras and Chapman, which gave the visitors a flattering final score line.