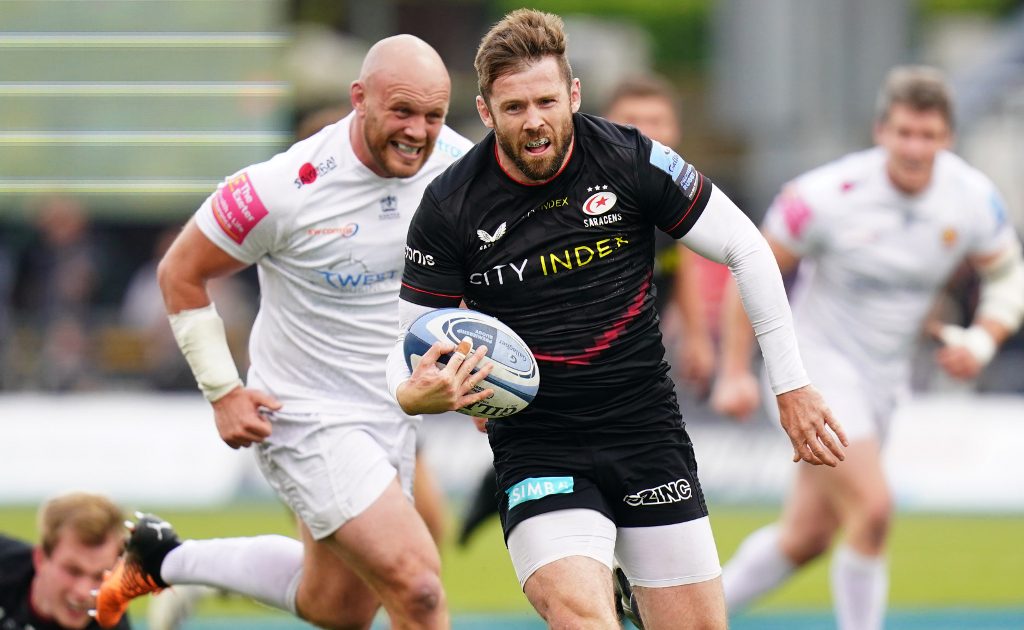 Second placed Saracens narrowed the gap on pacesetters Leicester Tigers at the top of the Premiership standings when they clinched a deserved 38-22 triumph over Exeter Chiefs in Sunday’s clash at StoneX Stadium.

Although Exeter held the upper-hand during the early stages and were leading 15-10 lead at half-time, Saracens took control of proceedings after the interval and eventually outscored their visitors by four tries to three.

For the Chiefs, Sam Skinner, Olly Woodburn and Stu Townsend crossed the whitewash while Henry Slade succeeded with a conversion and a penalty and Stuart Hogg also slotted a two-pointer off the kicking tee.

Following on from three losses to Mark McCall’s men in Premiership finals, Exeter are facing another season without silverware because of a result that leaves them marooned outside the top four with two games remaining.

Exeter felt most aggrieved at Saracens’ salary cap breaches due to their rivalry dominating the league from 2016 to 2019, but on a level playing field in north London they were comprehensively beaten.

They had their tails up heading into the second half but with a strong wind in their sails, it seemed doubtful it would be enough after the interval and the deficit was quickly reeled in by the hosts.

Farrell was the heart of Saracens’ response as Maitland and Tompkins touched down, but the Chiefs also self-destructed by conceding seven penalties in the pivotal third quarter.

Each blow of referee Craig Maxwell-Keys’ whistle brought with it another debilitating setback, enabling their opponents to canter out of sight with a bonus-point victory.

Saracens march on, their course set for a home semi-final, and they were forced to roll up their sleeves for a bruising first half in which they drew first blood through a move of real precision.

It came from scrum-half Aled Davies running flat across the pitch and finding Daly, whose in-out line and speed swept him over the whitewash.

There was urgency to Exeter’s play as Woodburn and Hogg counter-attacked down the right and Saracens, playing into a strong wind, were now struggling to escape their half.

Fly-half Slade was running on to the ball at pace and almost broke through in combination with Hogg, but the England playmaker was instrumental as the Chiefs crossed for the first time.

It took 14 phases in total, most of them pick and goes from the pack, but Slade and Sam Maunder delivered the magic needed to unlock the defence with Skinner producing the finishing touch.

Seven minutes later and the Chiefs were over again, Ian Whitten offloading to Woodburn, who broke through a tackle by Tompkins and weaved over.

Exeter renewed their attack right from the restart as Whitten broke free, but then Alex Goode did well on attack for the hosts as the game opened up.

Man of the match Farrell took centre stage as Saracens exploded into the second half, landing a penalty and then setting off on a break from his own 22 to launch a move that ended when Maitland touched down.

Exeter were now struggling to escape their half and – with the pressure building amid a high penalty count – they cracked in the face of a line-out drive that was finished by Tompkins.

Saracens scrambled well to repel an attack and when the Chiefs were penalised yet again, Farrell was on target once more with Ben Earl putting the icing on the cake of a conclusive win before Townsend scored Exeter’s third try in the game’s closing stages.