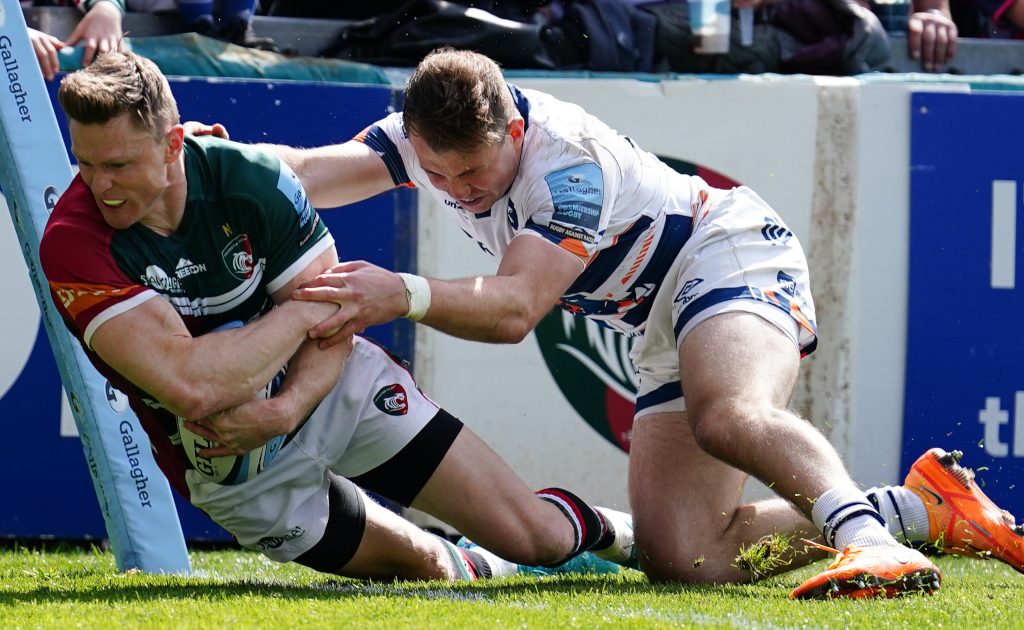 Chris Ashton dotted down try number 93, 94, and 95 to secure his place atop the all-time Premiership try-scorer table as Leicester thrashed Bristol to strengthen their first-place lead.

After taking a loss to Harlequins last weekend, Steve Borthwick’s side resumed their winning ways in the Premiership with an astounding 56-19 victory over Bristol at Welford Road.

All three tries from Ashton, along with one from Ben Youngs, were scored before the break while the second half saw Matias Moroni, Freddie Steward, Jasper Wiese and Harry potter all cross the line with tries of their own.

The visitors met the onslaught of Tigers scores with Jack Bates, Toby Fricker, Harry Thacker and Chris Vui but this was not enough to answer the eight scored by the hosts.

Just before kick-off, there was a standing ovation for former England hooker Tom Youngs, who had announced his retirement earlier in the week, when he was presented on the pitch.

Once the action got under way, it took just four minutes for Ashton’s moment of history – and 93rd Premiership try – when he got on the end of Moroni’s kick to score in the right-hand corner.

George Ford then took the score to 8-0 with a penalty before Bristol hauled themselves back into the contest when Piers O’Conor’s pass put Jack Bates through a gap and he showed Ford a clean pair of heels to score.

Callum Sheedy’s conversion reduced the deficit to one point, but Ashton extended the Tigers’ lead, and his own record, with his second try after 22 minutes.

Ellis Genge powered through a tackle before passing to Ford, who moved the ball on for Steward and it was his pass who sent Ashton clear down the left.

The 35-year-old then completed his hat-trick when a Leicester break from their own 22 led to Youngs throwing the final pass to put Ashton through to score from halfway.

Toby Fricker pulled a try back for Bristol with an easy finish off Harry Randall’s pass, but Leicester’s try bonus point was soon in the bag when Ben Youngs nipped in down the left-hand corner.

That gave the hosts a 27-12 lead at half-time, and they were handed a fifth try within two minutes of the restart when Tiff Eden’s kick was charged down by Tommy Reffell, giving Moroni an easy run-in.

Ford then twisted the knife with his second penalty of the afternoon and the fly-half’s last contribution before being replaced by Freddie Burns was a pass that led to Steward weaving his way through to score under the posts.

Leicester’s half-century was brought up after 67 minutes when Wiese was able to force his way over before Bristol’s Thacker ran in against his old club.

The late flurry of scores continued, as Tigers’ Potter made his way through some weary defence before some neat handling led to Vui grabbing a bonus-point try for the visitors.

Four tries from Saracens’ full-back Malins ensured that his side took a huge step to securing a home tie in the Premiership play-offs, winning 38-16 at Worcester.

With only two games of the regular season remaining, Saracens only need three points from fixtures against Northampton and Gloucester to be assured of that crucial home advantage in the semi-finals

They only needed to play in third gear at Sixways to record a convincing win over a spirited but limited Warriors team, who could only manage three penalties from the boot of Fin Smith and a late try from Tom Howe, which Billy Searle converted.

Saracens made an explosive start to take an early lead. A clean break from Elliot Daly threatened the try-line before a period of pressure resulted in a try for Malins.

Farrell converted before Smith put Warriors on the scoreboard with a straightforward penalty but his side then conceded a simple try. On halfway, Worcester misjudged their lineout throw and Earl was on it in a flash to seize possession and race 50 metres to score.

Worcester’s afternoon got worse when they conceded another try three minutes later. The visitors turned down an easy kick at goal in favour of an attacking lineout and were rewarded when Segun was provided with a walk-in.

Smith kicked his second penalty before Gareth Simpson, after intercepting in his own 22 ran 50 metres to build up Warriors’ first period of pressure but they could not break down a resolute defence.

Smith had another chance to take three points from a kickable penalty but this time Worcester opted for a line-out, which went astray.

Minutes later Smith was presented with a further opportunity and he made no mistake to leave his side trailing 17-9 at the interval.

Within a minute of the restart, Saracens secured their bonus-point when following a strong run from Nick Tompkins, Malins was given acres of space to score his second try.

The visitors sealed victory when Malins completed his hat-trick, with a long pass from Daly putting him into the clear.

With a plethora of replacements, the game fizzled out as Warriors barely threatened and it was left to Malins to enliven proceedings by skipping through a tired defence to stroll 30 metres for his fourth.

The home side looked set to finish tryless but with two minutes remaining, Howe rewarded a period of pressure to make the final score more respectable.

Gloucester romped to their biggest Premiership victory with a 64-0 demolition of hapless rivals Bath to move within a point of the play-off positions and arrest a mini slump.

The performance of Sam Underhill was perhaps the only positive for Bath, whose final match of the season at Worcester will probably determine who suffers the indignity of finishing at the bottom of the table.

Gloucester had secured the try bonus point they needed before half-time. Well though they played, they faced opponents who were passive in defence, shovelled slow ball predictably, struggled in the line-out and showed why they are the most undisciplined team in the Premiership.

They lost two players to the sin bin in the first 20 minutes. Prop Valeriy Morozov was penalised for a high tackle on Santiago Carreras after the full-back had come to ground having fielded a high kick.

Morozov had just returned to the field when centre Max Clark, who had earlier had a try ruled out because Underhill picked up the ball without getting back to his feet after flooring Mark Atkinson, was given 10 minutes off for tripping scrum-half Charlie Chapman.

He did so in the build-up to Gloucester’s opening try. Louis Rees-Zammit and Matias Alemanno had earlier been tackled short of the line, but the pressure told when Chris Harris finished off a move started by Atkinson.

Bath then held out to the half-hour before two Rees-Zammit tries in five minutes, the first after the visitors lost a line-out in their 22 and the second following the wing’s quick thinking at a ruck and a feeble challenge by Joe Cokanasiga that summed up his side, saw the hosts pull further clear.

It was by now ludicrously easy for the home side. Tries either side of half-time by Carreras and Ben Morgan extinguished any faint prospect that Bath could repeat what Northampton did to them last week and come to life as they were being buried.