Home Premiership Premiership: Five takeaways from the round, including momentum shifts, Owen Farrell and Harlequins’ timing 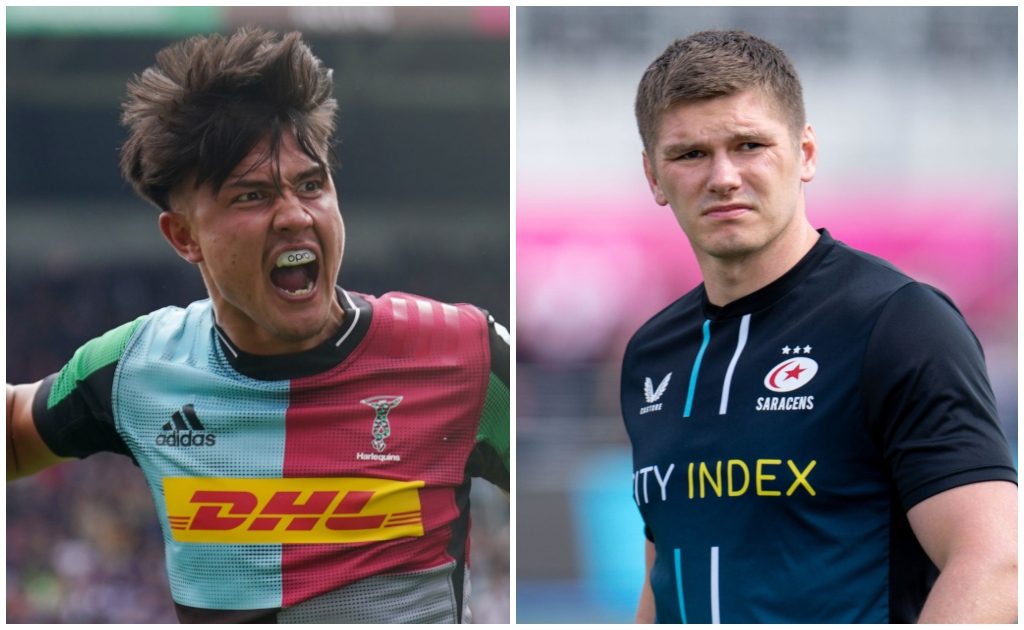 Following the Round 23 action in the Premiership, here’s our five takeaways from a memorable weekend as the season reaches a pivotal stage.

After Round 23 of the 2021/22 Premiership, only three weekends are left to play and things are simmering at the top of the table.

Saracens (more of them later) are now almost assured a play-off place, with only contrived mathematical scenarios preventing it being official. With Tigers heading the table, two places remain with both Northampton Saints (with a superior points difference) and Gloucester realistically able to challenge. Exeter have still a bye week to contend with, but in their run-ins both Northampton and Gloucester face Harlequins and Saracens in the next three rounds.

Exeter’s loss to Sarries over the weekend and with a bye next week means that they must beat both Bristol and Harlequins (at home) in order to remain in contention.

Harlequins, sitting in third place but with three games left and with a five-point advantage over the chasing clubs also look certain to qualify but one of the curiosities of this season is over the next three rounds, they play their three nearest rivals back to back, two of them on the road, making every game a potential 10 point gain or loss.

It might not have been planned this way, but every round from here on it has a cup final feel about it. None of the chasing pack of four can afford one slip up. It would be disingenuous to consider that any of the sides that qualify earlier will ease off in terms of selection as they all want to grab that crucial home ground advantage.

It’ll be fascinating to see who is peaking, but the Planet Rugby money is on Saints’ expansive style and form to secure the final place, with Harlequins joining them in third.

Exeter’s trip to Saracens was a pivotal match for them to win, and in the first half they came out of the traps fighting.

Leading 15-10 at half-time benefitting from a howling wind behind them, they carried and bashed their way into a wining position. But Saracens have Exeter’s measure in a rivalry fuelled by issues around historic salary caps and three cup finals where the London men triumphed. There’s no love lost at all between the two teams and, as things stand, Exeter look doomed to another season without silverware courtesy of the men in black after Owen Farrell returned to something like his very best form to ignite a second-half fightback that saw Sarries triumph 38-22.

Farrell at his best is an indispensable part of the England backline; he might not be the most physical, he certainly isn’t the fastest, but his intellect, precision in passing and enablement for others is absolutely peerless, and his pass to send Sean Maitland racing over was one that bore the hallmark of his play – intelligence.

With Ben Earl reminding Eddie Jones of his all-round ability in the back-row and despite Elliot Daly reminding us all that for every try he scores he’ll leak another defensively, Saracens and Farrell had a great day at the office.

Tigers may have eased off in terms of selection for this game, and indeed, rather like Bristol rather unsuccessfully last week, they had around half of their salary bill sitting warming the bench, but Harlequins, via another Danny Care-Marcus Smith masterclass, took the honours in a breathless game that went right down to the wire. Andre Esterhuizen, surely the Premiership player of the season, touched down for a 74th minute effort that secured the points for the Londoners. A slight edge at scrum-time combined with more ingenuity at half-back saw Quins over the line, but this was a pulsating game played at breakneck pace in the bear pit that the Stoop has now become.

From 1 to 15, Quins are competitive. Surely international honours and a summer tour now await the likes of Caden Murley and Louis Lynagh? Surely Care has shown enough skill to be allowed a recall to international duty alongside Smith? And surely Hugh Tizard and Will Collier are finally going to get the calls-ups their outstanding season has demanded?

Tigers may have faltered a little, but they’re a team fighting a battle on two fronts and they need to make sure their squad has enough coverage to give them the best chance of success.

But Harlequins are peaking at precisely the right time, as they did last year and it looks like once again, they’re capable of beating anyone.

Continuing the England selection theme, Jack Willis’s individual display in Wasps’ 41-12 demolition of Worcester Warriors is warming. No other flanker in England offers the all-round game that Willis has – try scoring, channel supporting, jackaling and set-piece, the lad has it all and his fitness is absolutely key to England’s World Cup chances, despite his paucity of caps.

Over at the Rec, Bath regressed back to their abysmal form of the early season, somehow blowing a 19-point lead as Northampton Saints managed, by the tips of their fingernails, to remain in the title race, as their big pack, marshalled by the outstanding Alex Mitchell and energised by the all-action Lewis Ludlam, managed to cross in the dying seconds for an unlikely win. This will be a mortal blow to Bath’s fragile self-confidence and for them, next season cannot come soon enough.

And, talking of holding on by your fingernails, Gloucester’s last second loss to Bristol might have dented their chances, but the vital bonus points, courtesy of tries from from Charlie Chapman, Louis Rees-Zammit, the outstanding Chris Harris and Jack Singleton were just enough to keep their play-off chances alive.

One of the continuing features of the Premiership this season is the sheer difference in interpretation between referees and also, the huge gulf between the best and the rest of the officials.

At StoneX Stadium, Craig Maxwell-Keys whistling mistakes had a quantum influence on the result. At one moment early in the second half, a promising drive for the Saracens line by the Chiefs was incorrectly penalised – a moment later another rather speculative penalty call saw Sarries score at the other end, a series of decisions that had literally a 14-point impact on the scoreline difference in less than a minute. He was influenced by commentator remarks and bluntly, started to referee to the pressure of the crowd rather than the events in front of him.

Elsewhere, Wayne Barnes was absolutely magnificent in running the Quins v Tigers match – even to the point of acting on the latest World Rugby ‘player push’ directive launched last week. He, Matt Carley and Luke Pearce are setting the standard for referees around the world and there’s a huge gulf between them and the chasing pack.

However, one of the trends that is influencing referees is the commentary from the pundits. TMOs can hear (if they choose to) the BT Sport feed, and with the likes of Lawrence Dallaglio and Austin Healey now absolutely focused on referee analysis over and above match analysis, it’s clear that the comms feed is informing the actions of the officials.

The solution is simple; PRL (and other bodies) must prohibit comms feeds into the match officials. They must remain independent and with the constant opinions of the strong personalities in the commentary box permeating their ear drums for 80 minutes, they’re simply not able to do so.