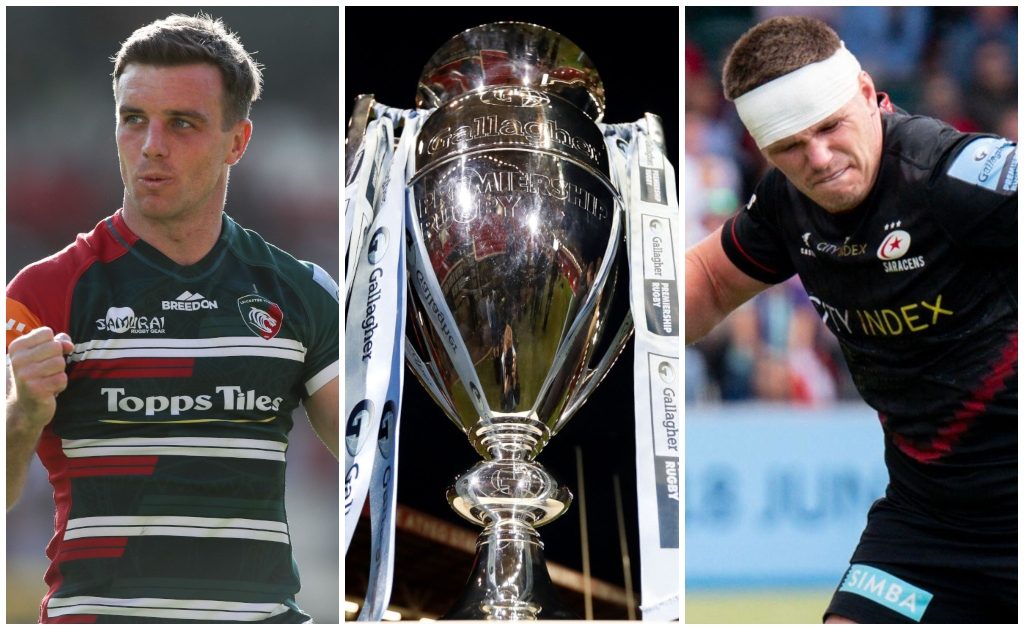 After nine months, 26 regular season rounds and two fiercely contested semi-finals, it all comes down to this as the best sides in the Premiership go head-to-head at Twickenham.

Rather aptly, first faces second when Leicester, who won 20 of their 24 matches, take on the dominant force of the 2010s in Saracens.

In their first season back in England’s top-tier following relegation for salary cap breaches, the Londoners have reached the showpiece event. It is, quite understandably, to the chagrin of many in England that they have made the final, given their past misdemeanours, but now that they are – presumably – within the required wage structure, it is still an impressive achievement.

There isn’t quite the depth there used to be, with the likes of Will Skelton, George Kruis, Titi Lamositele and Ben Spencer among those to depart after their indiscretion, but director of rugby Mark McCall continues to do an incredible job in reshaping and moulding the squad.

They have maintained their ability of unearthing absolute gems – Eroni Mawi and Theo McFarland the latest to be plucked from obscurity – while their coaches are amongst the best in the business.

McCall’s men will certainly provide a stern challenge for the league leaders, a Leicester squad that have effectively gone from the bottom to the top in the space of two years.

A big part of that has been the introduction of Steve Borthwick as their head coach. He has built the team superbly, getting the basics sorted before expanding their game to become one of the best sides in Europe.

The Tigers’ set-piece is probably the best in the country while their defence is equally imposing. And with George Ford playing some outstanding rugby, everything is in place for them to become Premiership champions for the first time since 2013.

However, Saracens are a more rounded team and have the experience of big finals, despite their recent exile from the Premiership.

It means that we are set up for a classic encounter, which will hopefully be as exciting as the 2010 clash between these sides where Leicester claimed a narrow 33-27 victory.

Saracens took the spoils in a 34-27 victory over Leicester at StoneX Stadium. In a game played during the Six Nations, which of course meant that some of the stars were missing, the Londoners edged past the Tigers. The Midlanders were competitive throughout and took the lead through Eli Snyman but Sarries were too strong and tries via Tom Woolstencroft, Alex Lewington, Sean Maitland and Vincent Koch put them in control. Leicester fought back and scores from Nic Dolly and Ollie Chessum gave them hope, but Woolstencroft touched down late on to seal the win for the hosts.

Leicester skipper Ellis Genge hopes to end his time at the club on a high as he prepares for his farewell.

Genge will leave the Midlands outfit following the Premiership final to return home to Bristol after six years at the Tigers.

“It has been a lot of hard work and a lot of good people putting a lot of time in away from the scenes, outside working hours, to get us where we are,” he said.

“I made a pact a long time ago that I would never leave Tigers if they were in a dark hole.

“So, I can hopefully leave on Saturday with my head held high.

“I’ve still got my stuff in the changing rooms. I haven’t packed up, I still live up here, and I’ve got the biggest game of my career on Saturday, and I will wait until after that for thinking about that stuff.”

Meanwhile, Saracens prop Koch says that the criticism they have received following their relegation for salary cap breaches has helped create a siege mentality at the club.

“It was a challenging time for us, I won’t lie,” Koch said.

“Mentally, it was tough. We got all the heat from the media, which wasn’t great, but it brought us closer as a group.

“We knew that people from the outside were not going to say great things about us, but we had to stick in the group together. Our main focus was to prove a point this year in the Premiership.

“When you go down to the Championship, it’s easy for people to jump the ship, but if you look at the players, everyone stayed – internationals, British Lions stayed at the club – which just shows there is something special.

“You have to get some feedback to grow. Bad things don’t always pull you down – they are something to grow on.

“The bad words said to us made us stronger, tougher. In the six years I have been here, there hasn’t always been positive feedback towards Saracens, but it definitely played a role in where we are as a team.”

For the Tigers, it starts and ends with the pack. Borthwick has got them incredibly well drilled and as a result they have the best set-piece in the Premiership. Whether it be lineout, scrum or maul, they have often dominated their opponents but, for them to beat Saracens this weekend, they now need to produce the best performance of the season.

Ellis Genge may well have been a surprising choice as captain but he has reacted magnificently to the added responsibility. His scrummaging has improved significantly while he is still that remarkably destructive presence in the loose. If he can get the upper hand on Koch then that will certainly provide a fillip to the rest of the forward eight.

Behind Genge, Calum Green has been a towering presence in the lineout and has been an understated member of the squad. Although Chessum, and before that George Martin, have received the accolades, having been called up to recent England squads, Green has helped make the Leicester set-piece tick. He will need to continue that on Saturday and withstand the pressure of Maro Itoje, who will look to be a nuisance in the air and the subsequent maul.

If Green can help provide good ball then it will give Jasper Wiese the opportunity to charge into the Sarries rearguard. Wiese was a liability in his first season at Leicester due to his ill-discipline, but he has worked hard to cut that out and it has paid dividends for the Midlands outfit. The South African’s technical improvements have made him an even bigger threat and he will be a crucial component this weekend.

Yesterday marked 17 games without a card for #LeicesterTigers no8 Jasper Wiese, after 3 yellows in 10 games to start 21/22. His disciplinary turnaround has been remarkable. Even off a long run in 77th minute, the South African got his technique spot on. #LEIvNOR pic.twitter.com/2nUVFDRxNr

Saracens will need to find a way of stopping Leicester getting a rumble on and that is where the Premiership’s player of the season Ben Earl comes in. The flanker has always been regarded for his attacking game but he has now become far more effective in defence. Earl’s work ethic and threat at the contact area will be crucial, and it will allow back-row colleague and this year’s breakout star, Theo McFarland, to roam around the field.

The athletic Samoan forward has been immense in 2021/22, with his height proving to be invaluable in the lineout and his ball skills helping to get Sarries on the front foot in attack. McFarland’s background as a basketball player has certainly come in useful as he is extremely comfortable with ball in hand. Set-piece work and the gritty stuff these Saracens forwards always get through will take precedence at Twickenham, but the 26-year-old also has the ability to cut loose.

The difference in this game might be behind the scrum, however. Leicester have very functional outside backs, who are defensively sound and technically adept, especially under the high ball, but they don’t quite have the running talent of Sarries. Nick Tompkins in particular has had a wonderful campaign for the Londoners. The Wales centre isn’t quite as effective in defence as Brad Barritt used to be and perhaps the Tigers can target that midfield channel, but he excels in other ways.

Tompkins has a low centre of gravity, is extremely difficult to bring to ground and is a tremendously skilful player. If Saracens can get a solid platform then the former England U20 star could be a game-breaker for McCall’s charges.

There are some tasty match-ups but none more so than at fly-half where a couple of old friends go head-to-head as George Ford faces off with England team-mate Owen Farrell. These two are seemingly joined at the hip having come through the age-grade set-up together before combining at international level on many occasions. Both are outstanding playmakers and have played integral roles in the run-in.

For the Leicester man, it has been a particularly superb season. Having been moved to the periphery of the England squad due to the form of Marcus Smith, Ford has responded brilliantly. With the focus fully on club matters, the 29-year-old is quite simply playing the best rugby of his career and has consistently shown Eddie Jones that he should not be discounted at the highest level. His kicking, both out of hand and off the tee, has been exemplary while he has been clinical in the opposition half. Ford may be playing under a more conservative game plan but the pivot still has that sleight of hand to create try-scoring opportunities for his team.

The Tigers playmaker is certainly more naturally creative than his opposite number but it is an area Farrell has improved immensely over the years. Physicality, leadership and an expert kicking game are the facets the England captain has always done well but he has also developed in attack. The 30-year-old now takes the ball to the line well and always makes good decisions when in possession, which has given him a more rounded style.

Ford is a man with more to prove, given that Smith has usurped him in the Red Rose pecking order, and a good performance on Saturday could see him start in Australia. That will not be at the expense of Farrell, who is a favourite of Jones and will certainly be in the XV, but this is an opportunity to show the England head coach that he has the creativity and attacking prowess to feature in his preferred position of fly-half.

All minds will be on Twickenham and whoever performs best this weekend will go a long way to deciding the outcome of the Premiership final, but the battle between these two outstanding players could equally extend beyond Saturday’s encounter.

It is going to be a tight one. Leicester have been brilliant all season and their excellent set-piece will keep them in the contest throughout, but Sarries have been building nicely and are peaking at the right time. McCall’s men have the experience and, at this current point in time, a more rounded team and game plan. Saracens by five points.