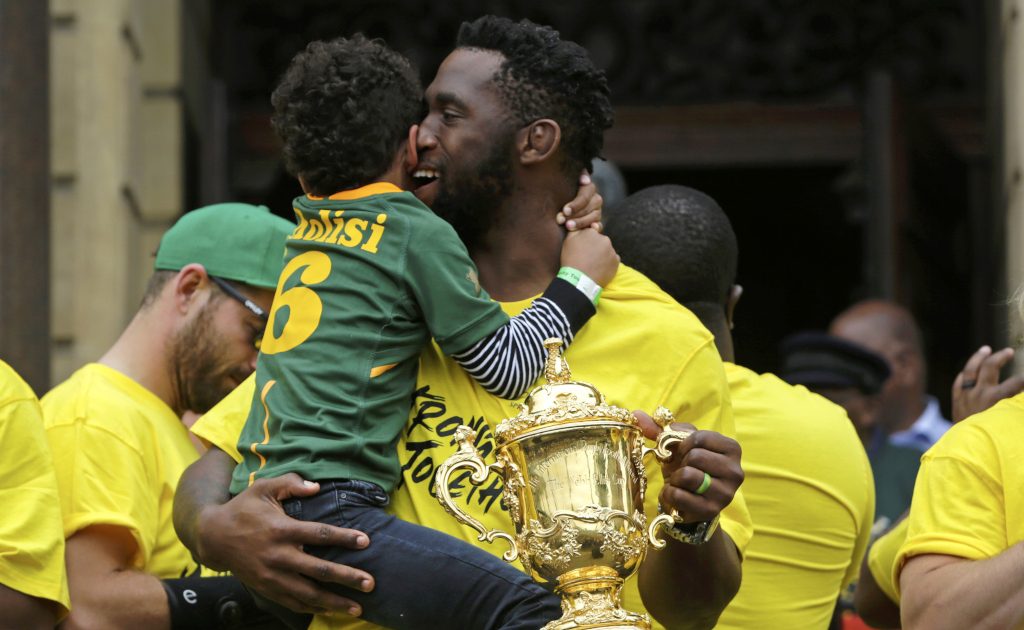 Bryan Habana has warned the British and Irish Lions of the “powerful” emotional drivers the tourists must overcome to beat the world champion Springboks.

World Cup winner Habana has moved to explain the kind of stirring back stories that bind South Africa ever tighter, ahead of next month’s three-Test series.

The Lions will kick-start their tour by hosting Japan at Murrayfield on Saturday, but the vital Springbok showdowns will not start until the first Test on July 24 in Cape Town.

Siya Kolisi made history as South Africa’s first black captain and then doubled down on that by lifting the World Cup in Japan in 2019.

Growing up in poverty

A young Kolisi would often go so hungry as to have his only meal of the day at school, while flying wing Makazole Mapimpi had to endure a 20km round-trip walk for his formative education.

So, as the Lions prepare to take on the reigning world champions, ex-Boks winger Habana lifted the lid on the deep-rooted backgrounds that underpin this summer’s hosts.

“I was fortunate enough to be in Japan and I got pretty emotional the week leading up to the final, talking about the Siya Kolisi story,” said Habana.

“Talking about Siya having to watch the 2007 final in a shebeen, a local pub in the rural townships, because his grandmother didn’t have a TV.

“He wasn’t worrying about the rugby, he went to school the next day not for education but just to get a meal because that was going to be his only meal for the day.

“Had England won the World Cup in 2019 it would have been well received and rightly celebrated.

“But for South Africa, you have someone like Makazole Mapimpi, who as a youngster had to walk 10km to school and 10km back from school, five days a week for five years of his life, and those stories that now become able to resonate with 70 per cent of our population.

“I do think the Lions have a unique history, and the players that represent that want to do the jersey proud.

“But as Rassie Erasmus aptly put it, pressure is not playing for your country, pressure is knowing where your next meal is coming from.

“There are different living circumstances in the UK and the northern hemisphere, and for us we lean on that, because it does bring about an extra sense of what we’re actually playing for.

“Yes it is emotive, but in the same vein, I know the Lions will want to come to South Africa as the team did in 1997 and do something as amazing as beating the Rugby World Cup champions.

“And I hope that will make for an extra spicy series, but for me it’s the legacy beyond that, the likes of Siya Kolisi and Makazole Mapimpi, whose stories resonate with 70 per cent of our population, stories that are so powerful and so much more emotive.”

South Africa’s socio-political issues have been intrinsically linked with rugby ever since Nelson Mandela donned the Springbok jersey in the transformative 1995 World Cup.

The Springboks won that tournament on home soil, with Mandela’s role helping heal some rifts in a divided nation.

🗓️ An occasion which transcended sport happened on this day 2⃣6⃣ years ago after South Africa won the 1995 World Cup.

🇿🇦 No one will ever forget the moment the great Nelson Mandela, proudly wearing his Springbok shirt, handed Francois Pienaar the trophy. 🥲 pic.twitter.com/DA0kzPPcPH

Habana has long used his platform to push for change and jumped at the chance to help Gareth Thomas’ Tackle HIV, especially given the virus’ prevalence in Africa.

“I was a 13-year-old boy when South Africa won the World Cup back in 1995,” said Habana, talking on behalf of the Tackle HIV initiative.

“And my dad took me out of school for the first time ever to have that experience of watching that.

“Rugby was the furthest thing from my brain, not because of the colour of my skin, because unlike 61 per cent of the population I was afforded the best opportunities to go to the best schools and to be given a good education.

“But I got to sit there and see the impact the sport has to play bringing about change.

“Nelson Mandela, a black man walking out in a Springbok jersey, that three years earlier was seen as a symbol of oppression, being chanted to by a crowd of 60,000 South Africans predominantly white.

“I was inspired, to pick up that game. And then 12 years on I had the chance to represent my country, be one of two players of colour on the field, to see children in the townships running barefoot behind buses just to get a glimpse of their heroes.”

:: Tackle HIV, a campaign led by Gareth Thomas in partnership with ViiV Healthcare and the Terrence Higgins Trust, aims to tackle the stigma and misunderstanding around HIV. For more information visit www.tacklehiv.org and follow @tacklehiv