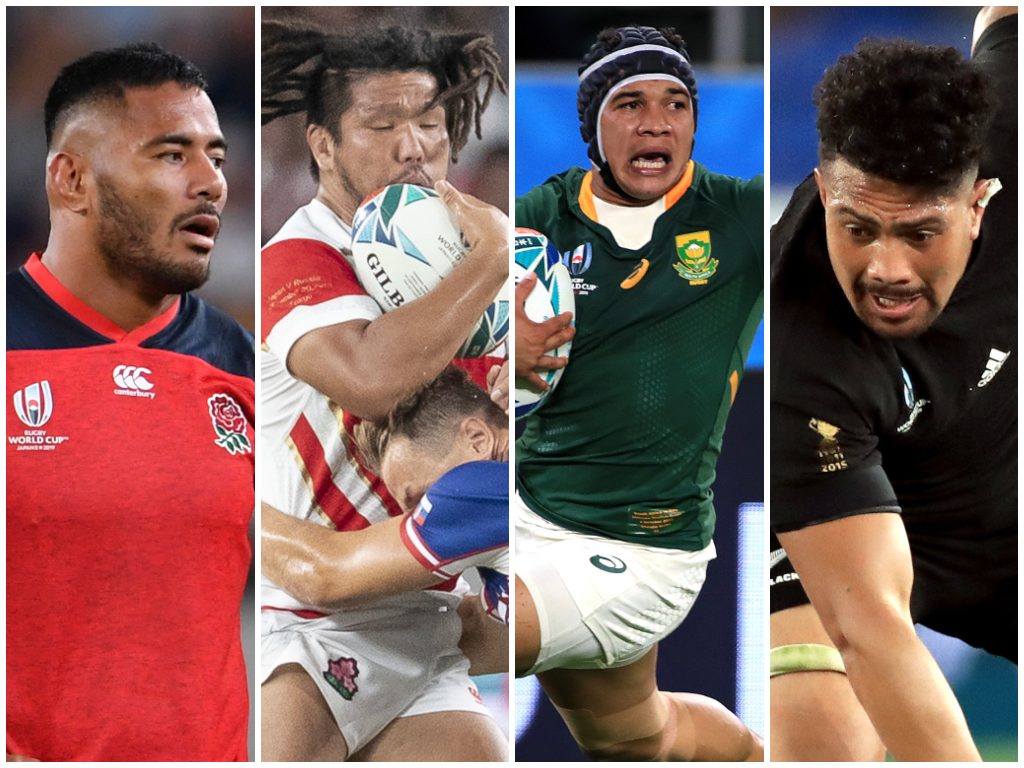 After our readers had their say and picked a strong line-up, it’s now our turn as we sat down to select the Planet Rugby Team of the Year for 2019.

Three players kept their shirt from 2018 so well done to them on their consistency and, of course, the other 12 players who made our team.

15 Beauden Barrett (Hurricanes and New Zealand): Different position but the same outcome as the two-time World Rugby Player of the Year once again takes his position in our side. Although Wales’ Liam Williams ran him close after an excellent 12 months, Barrett settled nicely after shifting from fly-half to full-back. It was a slowish start from the ‘Canes player, who struggled against South Africa and Australia in the Rugby Championship, but by the time of the Rugby World Cup he was at his best. England may have shut him down well in the semi-final but the All Blacks were the only team to defeat the Springboks in Japan and that was largely down to the combination between Richie Mo’unga and Barrett. When you add in his typically impressive Super Rugby form, the 28-year-old fully deserves his place in the XV.

14 Cheslin Kolbe (Toulouse and South Africa): Was once told that he was too small for Test rugby, but proved people wrong by starring in the World Cup. Kolbe initially came to prominence in the Top 14 and Champions Cup as his incredible footwork and balance caused numerous problems for opponents. As a result, a call-up to the South African team wasn’t long in coming and he established himself in the XV as the Boks claimed two titles. It was therefore apt that the Toulouse star sealed the victory in the global tournament with this fine try.

This try, in the Rugby World Cup final, was sensational from Cheslin Kolbe. pic.twitter.com/DXZFGG3DTz

13 Semi Radradra (Bordeaux-Begles and Fiji): The former rugby league player has quickly established himself as one of the most devastating runners in union and has deservedly received plenty of plaudits as a result. With ball in hand, Radradra is hugely difficult to stop and those qualities were displayed on the biggest stage in Japan. Although Fiji failed to qualify for the World Cup quarter-finals, the centre excelled in the group stages and particularly enjoyed a superb game against Wales as he gets in ahead of Jonathan Davies.

12 Manu Tuilagi (Leicester Tigers and England): After years of injury, it was wonderful to see the powerhouse centre back to his best. Whether at 12 or 13, he was a certainty to be included in the England XV with his mere presence a huge positive for the Red Rose. It is perhaps tough on South Africa’s Damian de Allende, who particularly shone during the latter stages of the Rugby World Cup, but Tuilagi’s consistency in performance sees him take the position.

11 Josh Adams (Worcester Warriors, Cardiff Blues and Wales): This was the tightest position to call, with Makazole Mapimpi (South Africa), Jonny May (England) and Marika Koroibete (Australia) all enjoying fine years, but none could quite match Adams, who has been consistently excellent throughout the past 12 months. In the Six Nations, the wing touched down three times as Warren Gatland’s men secured the Grand Slam before he finished the Rugby World Cup as the competition’s top try-scorer with seven, edging out the Springboks’ Mapimpi.

10 Handre Pollard (Bulls, Montpellier and South Africa): An incredibly underrated fly-half whose consistency played a significant role in what was a memorable year for South Africa. Hugely reliable off the tee, defensively one of the strongest 10s in the game, plus in possession he mixed slick handling with a physical approach that always had rivals guessing and in trouble. While Owen Farrell shone for Saracens and England, Dan Biggar helped lead Wales to the Six Nations and Richie Mo’unga impressed, Pollard takes our number 10 shirt with a bit to spare in 2019.

But Faf De Klerk is a whole mood ey😅🔥🔥🙌🏾🙌🏾🙌🏾 pic.twitter.com/qiplNAzcIj

9 Faf de Klerk (Sale Sharks and South Africa): He’s come a long way since being second-choice scrum-half at the Lions and also falling out of favour with then Bok head coach Allister Coetzee. A move to Sale Sharks revitalised his career and Rassie Erasmus soon came calling in 2018, with De Klerk going from strength to strength since. This year he managed games incredibly well, was typically nuggety in defence and bested his rivals in the vast majority of matches, helping South Africa to two major honours with his World Cup showings earning him many new fans.

8 Duane Vermeulen (Bulls and South Africa): You don’t know what you have until it is gone is a saying befitting of Vermeulen’s campaign in the green and gold. Since he was recalled to Test duty after returning to South Africa from a spell overseas, the powerful number eight has been a rock at the base and formed a major cornerstone of the Springboks’ incredibly strong spine in their team. In crucial areas they were physical, intelligent and determined and the 33-year-old Vermeulen typified all three traits to cruise to this spot after a superb year.

7 Ardie Savea (Hurricanes and New Zealand): Our readers looked elsewhere but it was Savea hands down at Planet Rugby after he was outstanding for the Hurricanes and New Zealand this year. One of the toughest attackers to bring to ground in close quarters, he regularly showed his power and pace in yellow and black as opponents struggled to contain him. While Sam Underhill enjoyed an impressive Rugby World Cup, Savea was consistently at a top level and can count himself incredibly unfortunate to only have the Bledisloe Cup for silverware this past year.

6 Pieter-Steph du Toit (Stormers and South Africa): Despite winning the World Rugby Player of the Year gong, it was far from smooth sailing to this jersey for the Springbok flanker. Why? A certain young England back-row, Tom Curry, was outstanding throughout the past 12 months as he shone for his country on both sides of the scrum. For the latter part of 2019 he was situated at six and showed he has a complete game to enjoy a long and fruitful career. However, Du Toit was a vital cog in the Bok machine, playing such a crucial role for South Africa as they claimed the Rugby Championship and Rugby World Cup. Strong at the line-out, breakdown, in the carry and in many other facets, he is our six.

5 Alun Wyn Jones (Ospreys and Wales): He might be 34 years old, but Jones is still at the peak of his powers and shows no signs of abating. The Wales captain was at the forefront of his country’s charge to a Six Nations Grand Slam, as well as their Rugby World Cup exploits where they suffered a narrow defeat to eventual champions South Africa in the semi-finals. A brilliant line-out operator, Jones is an old fashioned lock, who also got stuck in at the coalface of his side’s forward effort which allowed his flashier team-mates to work their magic on attack. The veteran was hugely influential at club level for the Ospreys and in the Test Arena while his leadership should not be underestimated as it was impressive throughout the year.

First cap or 130th, Alun Wyn Jones never gives anything less than everything. 23 tackles on a record-breaking day. Behind him, his players bow to the 50,000 @ITVRugby pic.twitter.com/cj8ItnB1bD

4 Maro Itoje (Saracens and England): The Saracens stalwart continues to improve and, although he finished with a runners-up medal at this year’s Rugby World Cup, Itoje should be happy with his personal form as he was amongst the tournament’s best players. Whether it was defence or attack, his line-out work or efforts at the breakdown – where he won the most turnovers (11) at the World Cup – Itoje was excellent in the execution of all his duties and it’s scary to think that he is just 25 years old and can reach even greater heights in the future.

3 Kyle Sinckler (Harlequins and England): He was forced off the field after just three minutes – due to concussion – in his team’s defeat to South Africa in the Rugby World Cup final but Sinckler did more than enough in 2019 to justify his selection in our team. A strong scrummager, the 26-year-old’s absence was keenly felt in that facet of play in the final, although he is also blessed with a brilliant skill-set and his try against Australia was a joy to watch. He impressed during England’s Six Nations campaign and, although his emotions seemed to get the better of him at times in the past, there was none of that during the global showpiece in Japan where Sinckler was one of England’s best players at the tournament.

2 Shota Horie (Sunwolves and Japan): England’s Jamie George, Bongi Mbonambi of South Africa and Wales’ Ken Owens finished ahead of Horie for our Readers’ Team of the Year but we’ve opted for the Sunwolves stalwart, who was one of Japan’s standout players in 2019. The veteran hooker was particularly impressive for the Brave Blossoms at the 2019 Rugby World Cup and was at the forefront of their charge to the quarter-finals on home soil. The 33-year-old did well in the execution of his core duties but also shone on attack and defence.

1 Tendai Mtawarira (Sharks and South Africa): 2019 was a dream year for the veteran, who retired as the third-most capped Springbok with 117 Test appearances – after Victor Matfield and Bryan Habana – as well as a Rugby World Cup winner. Earlier this year, the Sharks stalwart also became the most capped South African in Super Rugby history. The 34-year-old spent the early part of the Test season on the Boks’ replacement bench but was a fixture in their starting line-up by the time of the World Cup’s knockout rounds and showed his worth with a dominant scrummaging performance against England’s Dan Cole in the final, edging Mako Vunipola to our loosehead jersey.