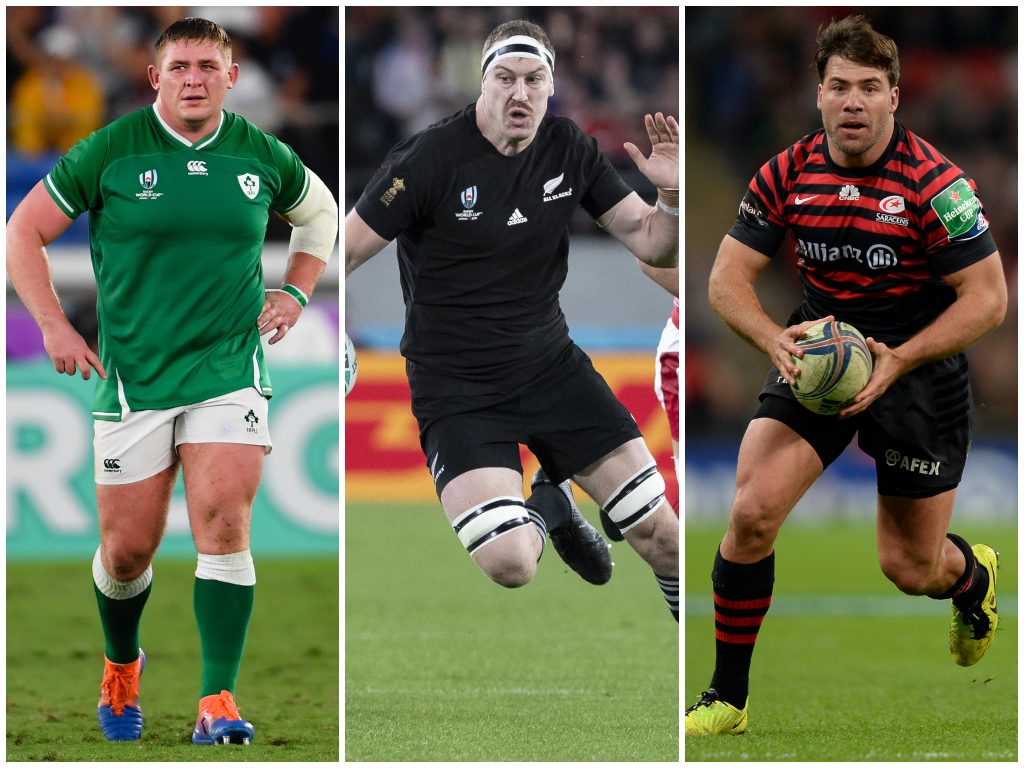 With our backs selected, it’s time for the forwards as Planet Rugby continues its flick back through the programme pages of the last 10 years to name its 2010-19 Team of the Decade.

As noted in Part One, in selecting this side we agreed only to pick players in their primary positions; judgement would be based on entertainment value, on-field contribution, and not one based on off-field antics.

Above all, we used three criteria to select our side; 1) Performance – personal and team, 2) Silverware won, 3) Spirit of Rugby – the players might not be World Cup winners but have put smiles on the faces of many.

We hope you enjoy (and argue about) our selection in our comments section.

Loosehead prop: With so many contenders we are able to discount some iconic props such as Gethin Jenkins, Cian Healy, Alex Corbisiero, Marcos Ayerza, Joe Marler and even Mako Vunipola.

In third place, nobody in rugby is more of an unsung hero than Kiwi Tony Woodcock. Two World Cup wins and always a great man to draw in the sweepstake for ‘first try scorer’.

In second place, despite the compelling evidence for Vunipola or Marler, is the rotund red wrecking ball that is Steven Kitshoff, a mobile power machine that just keeps on running. He’s an impact specialist these days but will come into his own now the Beast has called it a day.

However, what can one say about the mighty Tendai Mtawarira that’s not already been written? This guy stuffs the world’s best tightheads for a pastime. He’s left the reputation of some greats of the game in tatters, yet remains so gentle off the pitch, one would be quite happy taking him around to the grandparents for tea. A true great of the game, Tendai Mtawarira is our loosehead prop.

In second place, the master of the jackal, South Africa’s scrummaging powerhouse Malcolm Marx reaches over the ruck to grab the silver medal. At times, he’s put in performances that have won matches almost single handedly and he’ll remain around for many a year yet.

Our winner may raise an eyebrow and attract a bit of criticism but bear with us. Not one player has made more fans smile; nobody plays the game dripping with fun like this guy. No hooker has run as many yards or scored as many tries in the decade. In fact, he epitomes everything that’s good about the sport and continues, at 38, to be absolutely world class and is ‘evergreen’ in every way. Our Team of the Decade’s hooker is Schalk Brits.

"That in the slips from a South African was brilliant!"

"Can we not draw up a fund to get Schalk Brits to play on for another 20 years?"

Why is this guy retiring again?!

Tighthead prop: As the role of the tighthead refines itself, adding handling to the prerequisite of pushing, it says a lot for the standard of the game that we can’t find room for Adam Jones, Dan Cole, Sekope Kepu, John Afoa, Euan Murray or even Carl Hayman for his later years at Toulon.

In third place we have New Zealand stalwart Owen Franks, who was a cornerstone of two World Cup wins before surprisingly being left out in 2019.

Our runner up has only been around three or four years but we make no apology for his selection. In that time he’s transformed himself from an angry young man with a powder keg temper to one of the best ball handlers in the world, Kyle Sinckler.

However, our rumbustious winner is Wexford’s favourite farmer, the massive Tadhg Furlong, a man noted for wit and humour and someone that’ll go toe to toe with the best looseheads in the history of the game and already is unbeaten in two Lions Test series. Our tighthead prop Tadhg Furlong.

Front lock: Again, a star studded list to choose from, with notable absentees such as Donncha O’Callaghan, Brad Thorn, Franco Mostert, James Horwill and others.

Third place goes to the nimble and agile Maro Itoje. A breakthrough phenomenon, it’s frightening to see just what Itoje has managed to deliver since his first cap in 2016. His work at ruck-time is incredible, ceding nothing and creating plenty and there’s a lot more still to come from the brilliant but lightweight starlet.

The silver medal goes to this year’s gold medallist, Eben Etzebeth. They breed ’em big in the Cape and this man mountain is the pacemaker of the Bok’s heartbeat. Match him and you’re halfway to beating them, but that’s rather easier to say than do.

But at the top of the tree is Alun Wyn Jones. The humble man from the Valleys who never gives up, his giant hands a feature in securing Welsh ball ever since 2006. He is the warrior supreme and we’ve got a sneaky feeling that he’ll still be around when the Lions tour South Africa in 2021. Our lock is Alun Wyn Jones.

In third place, we’ve gone for former British & Irish Lions skipper, Paul O’Connell. A huge man with a towering lineout presence, his work for Munster and Ireland was peerless.

Our second placed man operates in a roving role with our winner – the lighthouse tall Sam Whitelock, a Rugby World Cup winner with all the gas and skills you need. He was close too to being our other lock.

But Brodie Retallick, able to jump at two or four is quite something else. His workrate and mobility are mind boggling and he has the uncanny knack of breaking primary defences with those long legged sprints of his. Our other lock is Brodie Retallick.

🤩 TEN OF THE BEST! Next up in our countdown of the All Blacks best tries of 2018 is this brilliant dummy from Brodie Retallick. It was so good even the cameraman brought it! pic.twitter.com/Plkr7vwHe1

Blindside flanker: With compelling performances this year from Pieter-Steph du Toit and Tom Curry, the blindside sees an embarrassment of choices. No places either for Peter O’Mahony, Dan Lydiate or Pablo Matera in our star studded list.

As runner up, it’s hard to think of any single player that’s had a bigger impact for his team that Japanese captain, Michael Leitch. A big athlete with a serious yard of gas, Leitch defines Japanese rugby and no-one would deny him a place in this illustrious list.

But some players come along occasionally that have the intellect and the leadership skills to fuse with their playing ability to provide the whole package. A man of steel with a World Cup winner’s medal, Jerome Kaino is our blindside flanker.

Openside flanker: The position of influence and another galaxy of players to choose from, picking the final three was certainly tougher than picking the actual winner! Apologies to Sam Warburton, Sean O’Brien, Justin Tipuric, Siya Kolisi, Sam Underhill and a raft of others who missed out here.

David Pocock and Michael Hooper are two Australians, inseparable in tandem, regularly seen in the same back-row, but are, at heart, both opensides. Pocock is the clamp in the tight, Hooper is the joker in the loose. As we say, both are so inseparable we are going to cheat and make them joint third.

Whilst we realise France configure their pack with left and right flankers rather than open and blind, second placed Thierry Dusautoir has been one of the game’s outstanding flanks predominantly in the openside role, (with a Bonnaire-type on the blindside), almost single handedly forcing a win against the odds against New Zealand in the 2011 final. He’s our runner up at openside.

Our winner is best known for playing his career wearing a Romulan Cloaking Device. A player invisible, creative, intelligent and hard. Without doubt the greatest openside the world has ever seen, our pick as captain and as openside flanker is Richie McCaw.

Number eight: One of the most influential positions on the pitch, it seems incomprehensible we can’t find a place in our top three for Taulupe Falatau, Billy Vunipola, Jamie Heaslip or Louis Picamoles. However, our top three take some separating and we’re pretty sure this will be the most hotly debated selection.

In third, a player we so wanted to pick as our blindside but the rules prohibited, Duane Vermeulen. During the World Cup, Nick Easter commented no player had ever given him more challenges than big Duane and the performance Vermeulen produced in the World Cup final was seminal.

Runner-up is the peerless Kieran Read. A man of honour and dignity, his early days were blessed with pace and tries a-plenty. His leadership has held the All Blacks together since McCaw retired and it will be strange watching the All Blacks without the great man locking the scrum.

If someone asked, which player could conceivably play at any position from four to 15 in international rugby, there are only two possible answers; Zinzan Brooke or, our winner, Sergio Parisse. He may not have had the opportunities that others have had, but his brilliance at the base of the Azzurri scrum, together with smiles he’s put on the faces of fans across the world, has secured his place alongside the all-time greats of the game. We can only speculate on how good he’d be in a New Zealand or South African side, so as it’s the holiday season, we thought we’d give him the nod. Our number eight is Sergio Parisse.