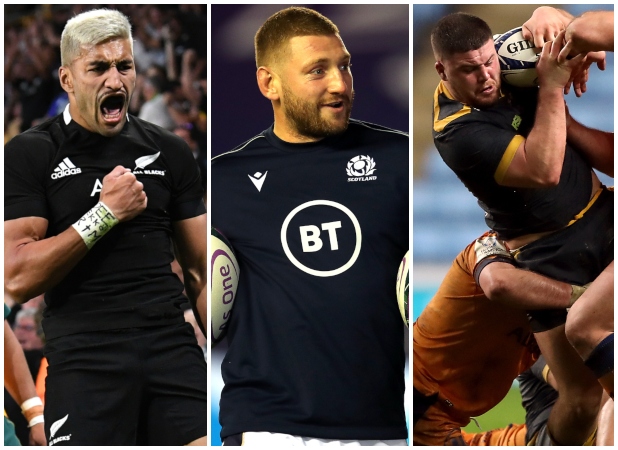 As we move into a new year we thought it was worth looking at 2021 and picking seven players to watch out for in both club and Test rugby.

Despite the rich pickings among the Top 14, with a plethora of talent coming through the French system, they miss out as we look at a confused All Black, a maverick Scot and every South African player in the world.

Following a blistering start to his career, the All Blacks flyer has stagnated somewhat and didn’t exactly flourish in 2020. It was a better year than 2019 where his form deserted him and resulted in the speedster being out in the cold during the World Cup, playing second fiddle to George Bridge and Sevu Reece.

Ioane has a desire to play centre and it’s true the All Blacks are currently weaker there, but we simply aren’t convinced that the 23-year-old is suited to that position. New Zealand’s better performances have come with Anton Lienert-Brown in that channel, particularly when they thrashed Australia 43-5 in a record win.

The Blues man then came on against Argentina and we all know how that went. Their attack faltered and while Ioane was not the cause he was certainly a symptom of the team’s failings with ball in hand.

Of course, it takes time for players to adjust to new positions and that is why it is such a big year for the talented back. Will he stick at 13 or admit defeat and settle back on the wing where he has been most effective at the highest level?

Whisper it quietly but if he puts in the performances he has done for Leinster on the Test scene then he may well become a bolter for the British & Irish Lions tour to South Africa – should it go ahead of course.

His man-of-the-match performance against Glasgow in February 2020 from lock was staggering and if he continues to build on the solid foundations he has already laid then there’s no reason why he can’t reach the very top this year.

While he shone at club level, 2020 was something of a disappointing and forgetful year in Scotland colours for Russell, due largely to a falling out with head coach Gregor Townsend. Thankfully, that is now water under the bridge which is great news for spectators – not just Scottish but neutrals too – as Russell is such a unique and special fly-half.

Never afraid to try his hand when the pressure is on, the mercurial 28-year-old has forged a reputation as a maverick who plays on his limits and it will be intriguing to see if British & Irish Lions head coach Warren Gatland wants him leading his charge down in South Africa.

Even if he misses out on the series shake-up against the Springboks, there should hopefully be plenty of Russell magic to enjoy for rugby fans when watching him for Scotland and Racing 92, a club he suits perfectly.

Alfie Barbeary only turned 20 in October, but that hasn’t stopped the youngster from becoming one of rugby’s biggest sensations in a matter of months. Barbeary has burst onto the scene in outstanding fashion, scoring eight tries in 12 senior appearances for Wasps, despite him playing in the back-row.

The youngster is officially a hooker, but is equally at home at number eight and has expressed a willingness to play in the centres, and ultimately appears to be a generational talent in the making. He is built like a house, scores tries for fun, carries like a walking tank and handles the ball like Steph Curry does a basketball.

Barbeary has made the most metres of anyone in the Premiership this season with 295 and has beaten 21 defenders, a feat that is bettered by only Facundo Cordero and Jasper Wiese. Although he has been ruled out of the Six Nations due to injury, it feels almost inevitable that he will be making his England debut in the very near future.

In many respects, the forgotten man of Australian rugby. Dave Rennie, in his first squad announcement after becoming Wallabies head coach, caused a stir by leaving the powerhouse number eight out of his 44-man group.

It is one thing to omit Naisarani from a smaller squad but to not see him as one of the best 44 players in the country certainly turned heads. That was, however, quickly forgotten once starlet Harry Wilson got onto the field and started to produce top-class performances, despite his tender years.

Pretty hard to see how Isi Naisarani doesn't fit into the top 44 players in Australia. One of the Wallabies best and most consistent since qualifying to play Australia…if he had been way off this year I would say ok, but he has been good since returning from injury?

Wilson was one of Australia’s best players in a team that endured a mixed 2020. Rennie’s outfit just about received a pass mark, but the Reds back-rower was a shining light.

He will no doubt be there, injury-depending, for the next decade, but one continues to question where the destructive carriers are in the pack. After struggling to find an effective balance alongside the Michael Hooper-David Pocock partnership for years, Naisarani came in and added power.

Australia failed to dominate the gain line in the recent Test matches and Naisarani would certainly help that, providing of course he can prove to the boss that he is ready to return to the highest level.

The former Leicester Tigers man was let go and allowed to join the Scarlets in the hope he could one day realise his international dream and the new Scarlets man already looks a special talent who could make a major leap in 2021.

Costelow is a serious threat with ball in hand, which complements a strong running game, while the young fly-half also doesn’t appear afraid to stand up defensively.

Scarlets have strong depth in the 10 position with Dan Jones, Angus O’Brien and the currently unavailable Rhys Patchell all competing for a starting berth, so Costelow has his work cut out to earn a regular spot in the Scarlets’ 23-man squad.

However, if the former Tiger can produce like he did against the Dragons on New Year’s Day, the sky is be the limit and Costelow could find himself as a regular starter and, dare we say it, a Welsh international by the end of the year.

A slight departure from the previous six but for good reason; they are the only tier one nation not to have played Test rugby in 2020. That will likely change in 2021 as South Africa remarkably play their first game since winning the 2019 World Cup.

There has been a few matches in the country, thanks to Super Rugby Unlocked and the Currie Cup, while there are a number of potential Springboks in Europe – albeit mainly at Sale where they seem to have created their own little colony in Manchester.

Nevertheless, it is hard to truly judge the team or the players at the moment, which means this year could be very interesting indeed. There are, unsurprisingly, individuals with plenty of credit in the bank, having won the biggest prize in the sport, but it has also given an opportunity for several youngsters or fringe players to prove themselves.

Elrigh Louw has particularly stood out as a bruising presence for the Bulls in the back-row, while 2021 could well be the year when Juarno Augustus fulfils his undoubted potential. With Duane Vermeulen not getting any younger, Augustus has the talent to take over that role, but only his form will answer that question over the next 12 months. And that goes for all the prospective Springbok representatives, who will feel that this is their time to shine.