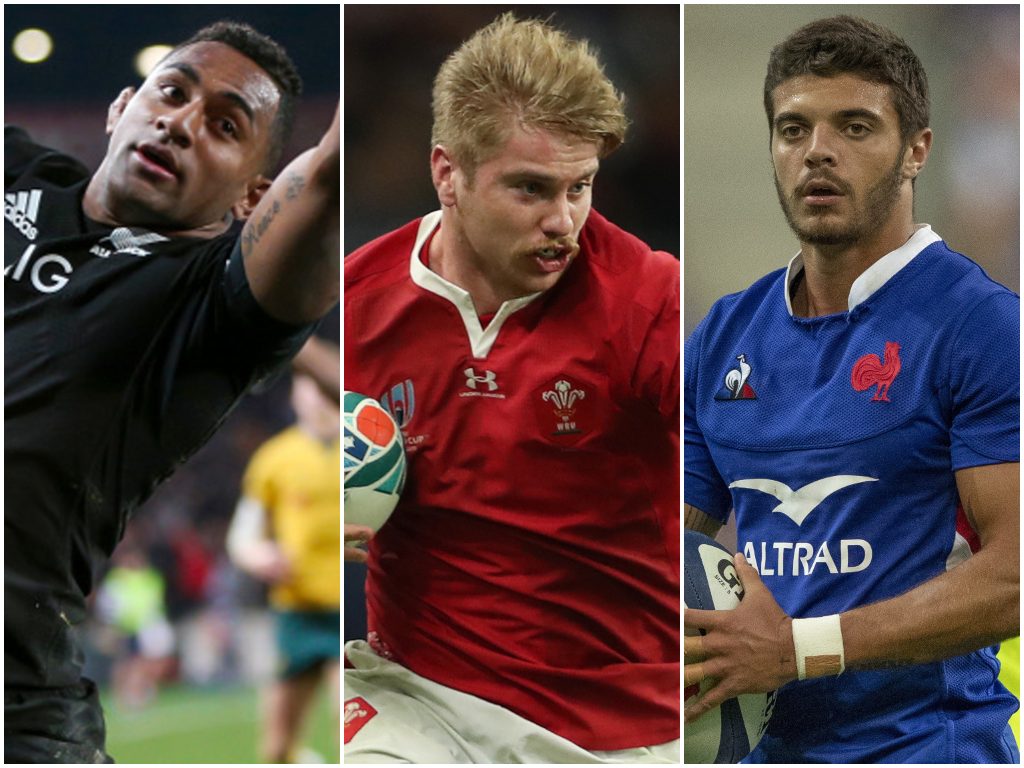 Getting your shot in the first-team is part of the ongoing battle for many rugby hopefuls, but in 2019 these up-and-coming starlets made it big.

Their sterling efforts have not gone unnoticed by us here at Planet Rugby and we have consequently cobbled together a XV that although lacks in caps, it makes up for in quality.

Here we go then…

Newbies of the Year

15 Will Jordan (Crusaders and Tasman): This was his breakthrough year after the full-back starred for the Christchurch-based outfit as they claimed their third successive Super Rugby triumph. The graceful runner fitted seamlessly into the team and was a regular in the XV and, although Jordan did not pick up any New Zealand caps, it won’t be a surprise should the 21-year-old be a regular in the All Blacks squad under new head coach Ian Foster. He later went on to star for Tasman in their Mitre 10 Cup triumph.

14 Sevu Reece (Crusaders and New Zealand): After an assault charge saw the wing’s prospective move to Connacht cancelled, Reece’s professional career was in doubt but, fortunately for the back three player, the Crusaders were in a forgiving mood and he has not looked back. Scott Robertson saw plenty of potential and the 22-year-old has duly enjoyed a stunning year on the field, which eventually led to an All Blacks call-up. Reece then excelled for New Zealand, becoming the first choice wing ahead of the World Cup, and starred in Japan.

13 Jordan Petaia (Reds and Australia): Injury may have disrupted the talented teenager’s year, but Petaia is now a well-known name in rugby circles after excelling in Japan. Due to a foot problem Petaia only featured three times for the Reds, but he did enough to impress head coach Michael Cheika, who named him in the Wallabies’ World Cup squad. The back then made his debut against Uruguay before he was a surprise starter in the quarter-final against England. Despite the heavy defeat, Petaia was outstanding and will surely get plenty of game time over the coming year.

12 Rory Hutchinson (Northampton Saints and Scotland): One of Gregor Townsend’s strangest decisions was to leave this in-form centre out of his squad for the Rugby World Cup. It may have even cost the Scots a quarter-final place. Hutchinson never featured much under previous Northampton boss Jim Mallinder but Chris Boyd saw his potential and the playmaker became a crucial part of the squad as the Saints reached the Premiership play-offs. An international call-up duly arrived and he was excellent in the World Cup warm-ups, but bizarrely the 23-year-old never made it to Japan.

Expect big things from a player with all the tools to be a leading #PremRugby star 🙌 pic.twitter.com/9P4HIgXJqS

11 Ruaridh McConnochie (Bath and England): The oldest on this list at 28 but perhaps the least experienced having never played professional XVs before the 2018/19 season. McConnochie made his name in Sevens, helping Great Britain win a silver medal at the 2016 Olympics, and that attracted the attention of Bath. The West Countrymen did not lack quality in the back three, but a raft of injuries gave the wing his chance and the speedster took it. Quick, balanced and deceptively strong, those were qualities which caught England boss Eddie Jones’ eye and he did enough to earn a place in the Rugby World Cup squad. The form of Jonny May and Anthony Watson limited his appearances but he did score his first try against the USA.

10 Romain Ntamack (Toulouse and France): We couldn’t leave out the World Rugby Breakthrough Player of the Year, who was entrusted with the fly-half responsibility at the World Cup. After helping club side Toulouse to the Top 14 title, the son of French great Emile slotted into the troublesome pivot position and immediately looked assured. Ntamack started three of Les Bleus’ four matches in Japan and will surely be a key component of their squad over the next decade.

9 Herschel Jantjies (Stormers and South Africa): Although Faf de Klerk was favoured by Rassie Erasmus at the World Cup, Jantjies has made huge strides over the past year and put pressure on the Sale Sharks man. The Stormers half-back made his name in the Rugby Championship and took that form into Japan where he was back-up to De Klerk. Despite being just 23, he controls the game nicely, has a sharp pass and is a threat around the fringes, while he is also a fearsome competitor.

8 Alex Dombrandt (Harlequins and England): The 22-year-old is yet to play an official Test for England but judging from his performances at club level and for his country during their Quilter Cup game against the Barbarians at Twickenham in June, it’s only a matter of time before he makes the step up to the next level. A Wales U20 representative in 2017, Dombrandt joined Harlequins last year and took the Premiership by storm courtesy of several outstanding performances. Dombrandt is a powerful ball carrier who usually wreaks havoc once he builds up a head of steam but also has a deft offloading game which makes him a real handful to opposing defences.

7 Fraser McReight (Reds and Australia U20): One of the rising stars of the Australian game, McReight has impressed at Super Rugby level since making his tournament debut off the replacements bench in their Round Six victory over the Brumbies in Brisbane. The 20-year-old has played for the Junior Wallabies for three successive years and led the side during the 2019 World Rugby U20 Championship in Argentina where they suffered a narrow loss in the final against France. McReight is highly rated in Australia and tipped to follow in the footsteps of legends like George Smith, David Pocock and Michael Hooper by wearing the Wallaby number seven jersey at Test level.

6 Aaron Wainwright (Dragons and Wales): One of the undoubted stars of this year’s World Cup in Japan, Wainwright’s game has come on in leaps and bounds as he enjoyed several outstanding performances. A strong ball carrier, Wainwright might not be the biggest player but what he lacks in physical size, he makes up in enthusiasm and guile which gives him an edge over most of his opponents. Wainwright’s athleticism and brilliant skills should make him a fixture in Wales’ run-on side for years to come and he will be determined to continue with his upward trajectory in 2020.

5 Joel Kpoku (Saracens and England U20): Has represented the England U20 side with distinction – alongside his brother Jonathan – and has caught the eye with his strong ball carrying ability and aggressive defensive style. Despite being just 20 years old, Kpoku plays with a maturity beyond his years and has shown plenty of promise during his short stint at senior level. With England internationals Maro Itoje, George Kruis and Nick Isiekwe as well as Australia’s Will Skelton ahead of him in the queue at Saracens, Kpoku has played most of his matches for the Allianz Park club’s Premiership Rugby Cup side and he will further his career at Northampton Saints from the 2020/21 season.

4 Pari Pari Parkinson (Highlanders and Tasman): Although he was part of the Highlanders squad in 2018 and played in a couple of Super Rugby matches for them then, Parkinson only became a fixture in their team this year thanks to several fine showings during the men from Dunedin’s run to the quarter-finals. Announced himself by scoring the first try of the 2019 Super Rugby campaign in the Highlanders’ win over the Chiefs in their tournament opener in Hamilton and hasn’t looked back since as his impressive lineout work and excellent skill-set made him a regular in Highlanders matchday squads.

3 Harry Hoopert (Reds): Another up-and-coming star of the Australian game, Hoopert is part of a crop of youngsters, who have been given a chance at Super Rugby level by Reds head coach Brad Thorn and the young prop has certainly made full use of his opportunity. Hoopert is solid in the scrums and mobile around the park but also willing to graft and working with Thorn has improved that aspect of his game. After making his Super Rugby debut and playing in five matches for the Reds in 2018, the 21-year-old played 12 games this year and also scored two tries.

2 Peato Mauvaka (Toulouse and France): The 22-year-old was part of France’s squad at the Rugby World Cup in Japan and although he did not get any game-time, the one-Test hooker should be richer from the experience. He has been part of Toulouse’s senior set-up since 2016 and played a big part during their successful 2018/19 Top 14 campaign where he caught the eye with some strong showings. A powerful scrummager, Mauvaka is also skillful with ball in hand and has established himself as Le Rouge et Noir’s first-choice hooker.

1 Guram Gogichashvili (Racing 92 and Georgia): Georgia are renowned for producing excellent front-row forwards and in Gogichasvili they have another one who is fast becoming one of the Top 14’s leading players in his position. Like most Georgian props, the 21-year-old is a strong scrummager but is also good with ball in hand and not shy to get stuck in on defence. Although he played off the replacements bench in most of Georgia’s World Cup matches, Gogichashvili did not disgrace himself when handed the opportunity on the game’s biggest stage and will be keen to cement his place in the Lelos’ starting XV over the next 12 months.