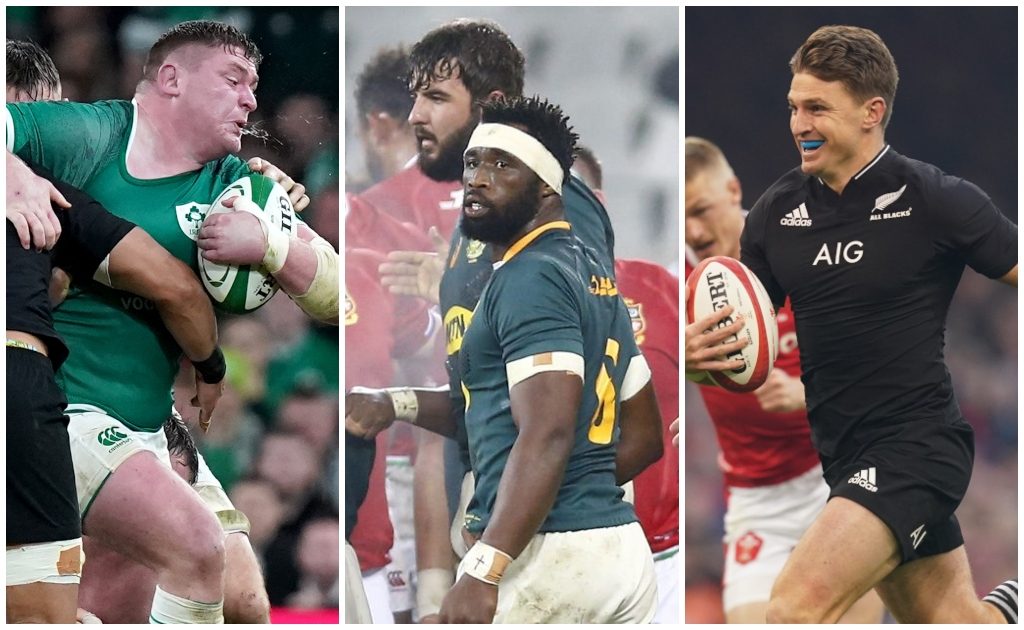 A huge thank you for taking part and letting us know who you enjoyed watching this year. Bring on 2022.

15 Stuart Hogg (Scotland, Lions and Exeter Chiefs): Retaining his spot in this team, Hogg did enough in your eyes to get the nod as he picked up 34.3% of the votes, edging out New Zealand’s Jordie Barrett who had 32.5%. Hogg’s performances for Exeter, Scotland and the Lions impressed you enough for him to also see off Ireland’s Hugo Keenan and France’s Melvyn Jaminet, who had great years and can count themselves unlucky to only get 18.7% and 14.5% of the votes.

14 Will Jordan (New Zealand and Crusaders): A much more comfortable decision here as the outstanding Jordan secured 48.3% of your votes for the right wing spot. He scored 11 tries in 15 Tests this year and also shone for the Crusaders, with his searing speed and ability to sniff out scores making him undroppable. A bright career awaits and the same applies to second placed Louis Rees-Zammit (24.5%) while Damian Penaud (21%) and Andrew Kellaway (6.2%) were next.

13 Lukhanyo Am (South Africa and Sharks): Another one who cantered to a spot was Springbok centre Am, who enjoyed an excellent campaign for his country. Picking up a huge 57.6% of the votes, Am was recognised for his efforts in green and gold as his game continued to go from strength to strength in both attack and defence. He sees off New Zealand’s Rieko Ioane (18.1%), Ireland’s Garry Ringrose (12.9%) and Scotland’s Chris Harris (11.4%) for this midfield jersey.

12 Damian de Allende (South Africa and Munster): Joining Am in the centre is his Springbok team-mate De Allende, who saw off the likes of World Rugby Player of the Year nominee Samu Kerevi to this shirt. De Allende claimed 44.5% of the votes while in second place was Ireland’s Robbie Henshaw (21%) and France’s Gael Fickou (18.6%) in third, with Kerevi bringing up the rear on 15.9%. Hats off to De Allende who’s been superb for Munster and the Boks in 2021.

11 Makazole Mapimpi (South Africa and Sharks): The third South African in your backline with 44% of the votes is Mapimpi, who continued to be as deadly as ever in the Springbok jersey this past year. With Cheslin Kolbe missing for a large chunk of the Test campaign due to injury, Mapimpi needed to up his game and certainly did that with a series of strong performances that sees him beat Duhan van der Merwe (22.3%), Josh Adams (19%) and Marika Koroibete (14.7%).

10 Beauden Barrett (New Zealand and Blues): Reclaimed the All Blacks’ number 10 shirt this year as he recaptured close to his best form in 2021. You were clearly impressed and voted him as your pick with 46.2% of the votes, ahead of impressive France general Matthieu Jalibert (30.1%). Australia’s Quade Cooper (15.5%) was third on the list after an amazing comeback season, with Dan Biggar fourth (8.2%). Those pushing for Romain Ntamack might be interested to know he played just two matches at fly-half for France this season, while Finn Russell missed the shortlist as we felt he wasn’t as consistent as the four nominees.

9 Antoine Dupont (France and Toulouse): No surprises here as the World Rugby Player of the Year garnered a whopping 89.7% of the votes after his superb campaign for club and country. A domestic and European double was backed up by strong performances for Les Bleus as skipper as he comfortably sees off New Zealand’s Aaron Smith (5.1%), Scotland’s Ali Price (3.9%) and Australia’s Nic White (1.3%). France, under his leadership, appear a major Rugby World Cup threat. 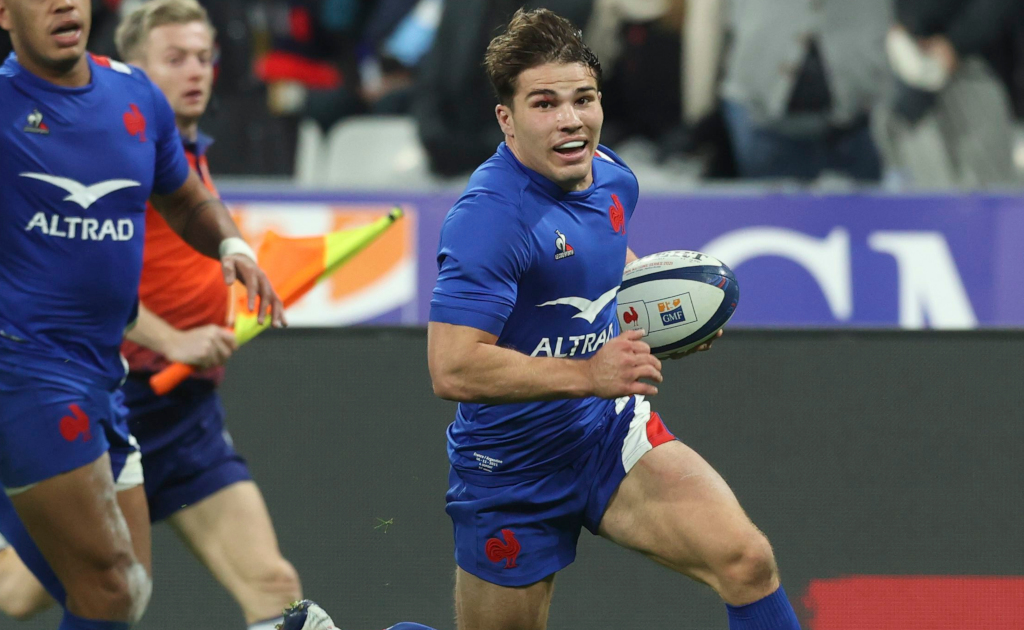 8 Ardie Savea (New Zealand and Hurricanes): Savea has been a driving force for the All Blacks and Hurricanes for a long time now and in 2021 he took on the New Zealand captaincy like he was born to do it. The number eight led from the front, as is his wont, with carries putting the All Blacks over the gain line and he got 52.5% of your votes. Gregory Alldritt of France (23.4%), Jack Conan of Ireland (22.4%) and Australia’s Rob Valetini (1.7%) were next best for you.

7 Siya Kolisi (South Africa and Sharks): On the back of a few comfortable selections, openside flanker proved a much closer race as Kolisi ended on 32.8% with Michael Hooper (26.8%), Tom Curry (21.6%) and Hamish Watson (18.8%) competing well in this poll. Hooper was outstanding for the Wallabies but it felt like Kolisi got stronger as the season played out and a series win over the British & Irish Lions followed by a strong year-end effort sees him get the nod.

6 Courtney Lawes (England, Lions and Northampton Saints): At one point in the voting it looked like Lawes would miss out to Tadhg Beirne, who was excellent for Ireland, the Lions and Munster. However, the England international eventually grabbed top spot and deservedly so as he had arguably his best year to date. Such a complete player, Lawes ended with 36.7% of the votes, with Beirne (35.7%), Charles Ollivon (18.8%) and Ethan Blackadder (8.8%) the rest.

5 Lood de Jager (South Africa and Sale Sharks): The towering second-row gets in with 33.9% of the votes, seeing off Sam Whitelock (30%) and Alun Wyn Jones (27.7%) while Paul Willemse was fourth on 8.4%. De Jager was a rock during the British & Irish Lions series and also put in good shifts in the Rugby Championship. It’s also clear you felt the injuries to Jones and Whitelock’s quiet year by his standards held the pair back as De Jager is your No. 5 lock.

4 Eben Etzebeth (South Africa and Toulon): Joining De Jager in the engine room is his Springbok team-mate Etzebeth after he totted up a handsome 52.8% of the votes. His battles with Maro Itoje during the Lions series were absorbing to say the least and the English giant relinquishes his spot in this team from 2020 as he finished on 35%. The other two contenders were Brodie Retallick (8%) and Adam Beard (4.2%) but hats off to Etzebeth as he was strong all year.

3 Tadhg Furlong (Ireland, Lions and Leinster): The first difference from our forward pack comes at tighthead where you opted for Furlong ahead of Taniela Tupou. Furlong was a comfortable winner as he picked up 64.7% with Tupou getting only 12.2% despite a strong year for both the Reds and Australia. Furlong though was just as impressive as he shone for Leinster, Ireland and the British & Irish Lions, demonstrating many strings to his bow in several games.

2 Malcolm Marx (South Africa and Kubota Spears): Another position we differed in opinion was at hooker where Marx did enough to get the majority of your votes, edging Julien Marchand (31%), Bongi Mbonambi (19.9%) and Julian Montoya (16.1%). Yes, Marx finished with 33% despite featuring for the Boks mostly as a replacement in 2021 – he was on the bench for 10 out of the 11 Tests – so this says a good deal about his impact for the Springboks.

1 Steven Kitshoff (South Africa and Stormers): A second member of the Springboks’ ‘Bomb Squad’ was your selection at loosehead with Kitshoff racking up 40.8% of the votes. An incredible impact man off the bench who played a vital role throughout 2021, Kitshoff gets in ahead of the impressive French prop Cyril Baille (27.1%), Wales and Lions loosehead Wyn Jones (20.6%) and Scotland and Lions prop Rory Sutherland (11.5%) to round off your Team of the Year.