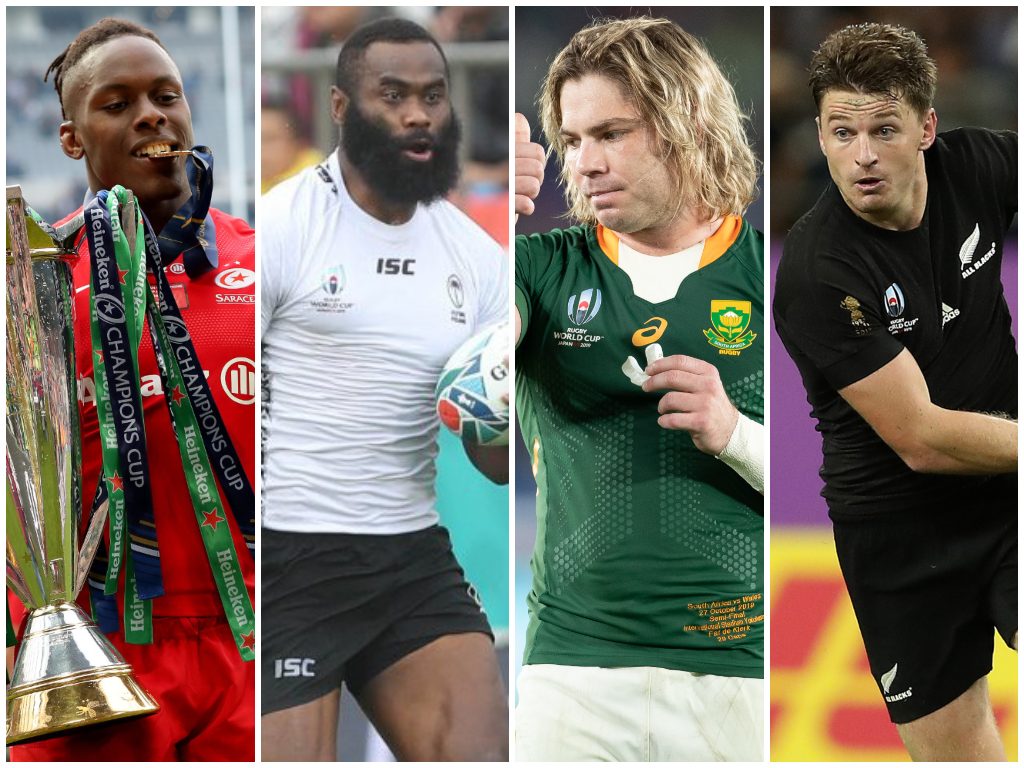 Nearly 30,000 of you voted, we counted, and here it is – the Planet Rugby Readers’ Team of the Year.

A huge thank you for taking part and letting us know who you enjoyed watching this year. Bring on 2020.

15 Beauden Barrett (New Zealand): Despite making a positional shift this year, Barrett impressed at full-back for New Zealand and you voted him ahead of Liam Williams as your number 15. The All Black star received 51% of the votes to see off the Saracens and Wales back, who finished with 39% and was the only real challenger to Barrett. Barrett’s speed was better utilised in his new position and he got through a mountain of metres, but also popped up as a first receiver which added an extra dimension to New Zealand’s attacking game.

14 Cheslin Kolbe (South Africa): Earning the largest percentage for a position this year was the Toulouse and Springbok wing. He finished with a whopping 81% of the votes and what makes that number all the more impressive is that the other three candidates were in-form trio Kotaro Matsushima (Japan), Sevu Reece (New Zealand) and Damian Penaud (France). Matsushima was next in line to Kolbe with 11% and Reece (5%) and Penaud (4%) trailed behind despite fine years. But Kolbe was breathtaking all year for club and country, as you agreed.

13 Semi Radradra (Fiji): The Premiership will be a richer competition when Radradra arrives at Bristol Bears next season. The maestro has been in sparkling form for Bordeaux-Begles and Fiji this year, whether that be at outside centre or on the wing as he demolished would-be tacklers at will. Radradra finished with 59% of the votes with Wales centre Jonathan Davies next on 22% after an impressive season that peaked with another Six Nations triumph. Coming in third was the Boks’ Lukhanyo Am (11%) with Henry Slade (8%) in fourth place.

12 Damian de Allende (South Africa): The southern hemisphere dominance continues in the backline as you went for South Africa inside centre De Allende, who finished with 40% of the votes. He came in ahead of Manu Tuilagi (29%) and Samu Kerevi (21%), who were excellent for England and Australia respectively over the past 12 months. New Zealand’s Anton Lienert-Brown was also on our shortlist but only received 9% as De Allende’s showings for the Springboks in their Rugby Championship and Rugby World Cup wins saw him get the nod.

11 Josh Adams (Wales): A close-run race on the left wing but it was Adams who finished on top with 31% of the votes. Tied in joint second position was Makazole Mapimpi and Jonny May (both 27%), while Marika Koroibete was fourth on 16% after a strong campaign. Adams though was influential for Wales in their Six Nations success and also ended the Rugby World Cup as the leading try-scorer, as he proved time and again just what a lethal finisher he has become. He has already hit the ground running at his new club Cardiff Blues.

Josh Adams was in sparkling form for @WelshRugbyUnion 💪🔥

10 Handré Pollard (South Africa): Pulling the strings at fly-half is Pollard as he saw off his closest challenger, England’s Owen Farrell. Pollard picked up 39% while Farrell got 36% as the Bok edged this spot, likely due to his performances in Japan where he guided his country to glory with consistently solid showings. In third position was Crusaders and New Zealand playmaker Richie Mo’unga (13%) with Dan Biggar (12%) rounding things off in the voting after an excellent year for Wales and the ever-improving Northampton Saints.

9 Faf de Klerk (South Africa): After a couple of polls that were touch and go, it’s back to smooth sailing as we reach your scrum-half selection. De Klerk picked up a massive 71% of the votes, comfortably seeing off Aaron Smith (12%), Gareth Davies (10%) and Antoine Dupont (8%). The Springbok was a formidable presence at half-back and formed quite the partnership alongside Pollard, as they dominated rivals with their game-management behind a bruising pack. De Klerk was also an attacking threat with speed and skills to boot.

8 Duane Vermeulen (South Africa): Was crucial to the Springboks’ resurgence in the international arena as his experience at the base of the scrum laid a solid platform for those around him to flourish. You voted Vermeulen as the number eight of 2019 with 68% of the votes, with Japan’s Kazuki Himeno (17%), Wales’ Josh Navidi (12%) and Australia’s Isi Naisarani (3%) left trailing by the Bok.

7 Sam Underhill (England): One part of the Kamikaze Kids, Underhill gained plenty of admirers at the Rugby World Cup as his physicality came to the fore. Defensively he was a leading light for England and you voted him as your openside with 39% of the votes. In second was Ardie Savea (33%), who was brilliant all year, while Justin Tipuric (17%) and Michael Hooper (11%) brought up the rear.

6 Pieter-Steph du Toit (South Africa): The World Rugby Player of the Year was your pick at blindside as he stole the show at the World Cup with destructive performance after destructive performance. It wasn’t just what he did with ball in hand but also his ability to disrupt the opposition while being a solid line-out option. He took 53% of the votes ahead of next in line, Tom Curry (31%), who did very well in an unfamiliar position. After an excellent campaign for Wales, Aaron Wainwright was next (11%) while Pablo Matera, who was outstanding in Super Rugby, got 5%.

A list of @Springboks who have won the @WorldRugby Men's Player of the Year award:

5 Alun Wyn Jones (Wales): Another Herculean year from a player whose form simply does not drop. Jones skippered the Welsh to another Six Nations Grand Slam and the semi-finals of the Rugby World Cup. You clearly appreciated his performances as he finished with a massive 59% of the votes, his closest challenger being Sam Whitelock (16%), who was instrumental in the Crusaders winning the Super Rugby title. In third with 15% was Leinster and Ireland’s James Ryan while England lock Courtney Lawes came in fourth spot with 9%.

4 Maro Itoje (England): It’s an all-northern hemisphere second-row as England and Saracens’ Itoje joins Jones in the engine room. Itoje ended with 78% of the votes with Scott Barrett next on 13% in what was a one-horse race as the Saracen followed up his Premiership and Champions Cup success with impressive showings in helping his country to the Rugby World Cup final. A superb year.

3 Kyle Sinckler (England): Despite the pain of missing the majority of the World Cup final, it was a groundbreaking year for the tighthead as he’s taken his game to new heights these past 12 months. Solidity in the tight mixed with delicate touches in possession and a dangerous running game has set the bar higher for props. You rewarded his form for Quins and England with 60% of the votes as South Africa’s Frans Malherbe (23%), New Zealand’s Nepo Laulala (10%) and Australia’s Allan Alaalatoa (8%) were next in line.

2 Jamie George (England): All four on the shortlist at hooker had realistic chances of claiming this jersey but you went for George, who picked up 36% of the votes. He enjoyed an excellent season for club and country and got the nod ahead of Bongi Mbonambi (23%), Ken Owens (22%) and finally Shota Horie (19%). To overtake Malcolm Marx in the Bok pecking order shows what a campaign Mbonambi had while Owens was superb throughout 2019 and Horie stood out in the World Cup. But you opted for George who grew in Dylan Hartley’s absence.

1 Tendai Mtawarira (South Africa): Last but by no means least, we come to loosehead prop and it was the veteran South Africa forward Mtawarira who was picked. The 34-year-old signed off from international rugby in style as he won the Rugby Championship and World Cup, enjoying a fitting farewell on the field. With pressure from Steven Kitshoff, he raised his game which benefited the Boks considerably as he took 59% of the votes. Next was Mako Vunipola (25%) while Japan’s Keita Inagaki (9%) and New Zealand’s Joe Moody (7%) followed.