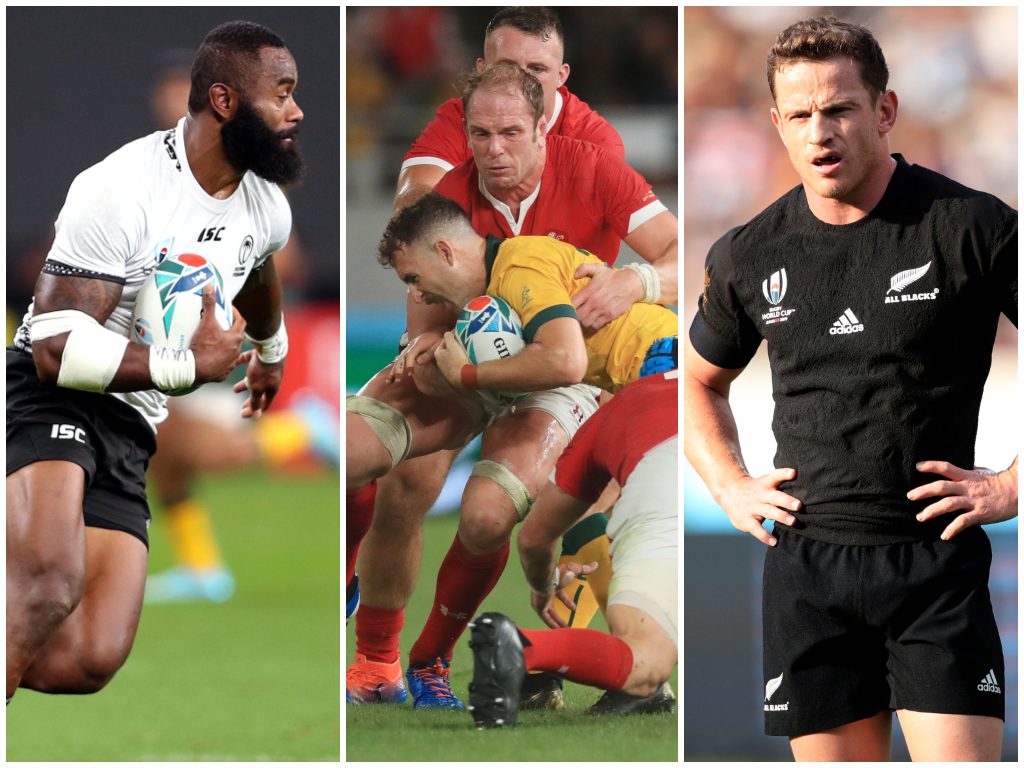 With the Rugby World Cup pool stage having drawn to a dramatic close, we have sat down to select our unique awards for players, teams and more.

These teams came into this meeting in good form and with opening wins under their belt, so top spot in Pool D was effectively at stake in the clash. That set the stage for an entertaining game and the sides did not disappoint as they delivered a classic, filled with heaps of thrilling moments. The momentum toed and froed and the result was in the balance until the end but Wales held on in the closing stages to seal a vital 29-25 win.

Kolbe beats out Japan’s Kotaro Matsushima after a couple of superb all-round performances for the Springboks. He was the standout player in South Africa’s opener against New Zealand, despite failing to score a try, and he kept the All Blacks’ defence guessing, gaining 124 attacking metres – more than any other player in the match. He hit the ground running in the Boks’ next game, against Italy, scoring a brace of tries and running for 94 metres. Despite his small stature, Kolbe boxes above his weight and also impressed in defence and under the high ball.

Is Cheslin Kolbe the player of the tournament so far? 🧐 🔥#SAvCAN #MondayMotivation #ITVRugby #RWC2019 pic.twitter.com/x2iqOi8t2c

The Pacific Islanders were competitive in their opener against the Wallabies and, although they lost that clash, they were expected to cruise to victory against minnows Uruguay next up. The South Americans did not read the script, however, and came out firing which caught Fiji by surprise. Los Teros delivered a superb performance and, although Fiji outscored them by five tries to three, they were kept in the contest by accurate goal-kicking from their fly-half, Felipe Berchesi, who finished with a 15-point haul as Uruguay claimed an unlikely 30-27 victory.

With dangerous tackling in the news quite often at Rugby World Cup 2019, Fiji’s Radradra hit the headlines for his textbook tackle on Wales full-back Liam Williams in their clash in Oita. Despite finishing on the losing side, powerful winger Radradra delivered one of the tournament’s best individual performances and he walked off with the official player-of-the-match award. Although Radradra was dangerous on attack, his impact on defence also caught the eye, especially that hit on Williams which rocked the Welsh star, who will have felt that one the day after.

As mentioned above, Kolbe proved a real handful to the All Blacks’ defenders in that pool match in Yokohama as he constantly breached the gain line with his vast array of attacking skills. And shortly after half-time the flyer made a telling break down the right-hand touchline with only a desperate cover tackle from Mo’unga preventing him from claiming an excellent score in the corner. Mo’unga deserves plenty of credit as he did well to keep Kolbe guessing before hauling him in, something which few players have done at the 2019 tournament.

Sensational tackle from Richie Mo'unga on Kolbe to deny him at first but the Boks kept the foot on the throat after Kiwis loose in their counter-attack.

We often forget in the sporting world how much youngsters idolise their heroes and the responsibility the players do have in order to set the right example. This wonderful moment between a mascot and experienced Wales pair Alun Wyn Jones and Dan Biggar was a joy to watch as the young boy was visibly star stuck by the international duo. It is clear he was waiting to see fly-half Biggar but second-row Jones was also brilliant in making his day.

Rugby’s Mr Happy, Schalk Brits, would have laughed in your face a year ago if he was told he’d be in South Africa’s 31-man squad for the Rugby World Cup. But, after a conversation with Springbok head coach Rassie Erasmus, his retirement was subsequently put on hold and he was included in the travelling squad. Needless to say he’s enjoyed every second in Japan, notably this shirt swap moment with Canada hooker Andrew Quattrin.

A player who has had to work incredibly hard for his reward of an international call-up, Brad Weber has grabbed his chance with both hands at this Rugby World Cup. The Chiefs scrum-half has been excellent coming off the bench for New Zealand, scoring two tries thus far, as well as impressing all over the field with his speed and quick thinking in particular impressive. This ball, though, for TJ Perenara’s superb score has been our standout pass.

There has been an unsatisfying focus on the performances of the officials but it’s improved through the pool stages. As they have got to grips with the law book, particularly around high tackles – albeit many will rightly argue that it should have been clear before a ball was kicked – the decisions have started to become more consistent. However, the best displays from the start of the action in Japan have come via Wayne Barnes, who will surely take the final should England not get there. In the key Ireland versus Scotland and South Africa versus Italy pool games, the vocal official was clear, concise and consistent, which is all you can ask for from the man in the middle.

I’ve said before, I have no interest in discussing refereeing when there’s so much actual rugby, but, I’ll make one exception.

Wayne Barnes is excellent, and doing a brilliant job in what should be a very difficult game to referee today. #ITAvRSA

Even after game one of the tournament, new followers to rugby were raising an eyebrow to the accent and character of the Russia captain and full-back. Artemyev possesses a mixture of Irish, American and Russian twang, but one thing that is not tough to make out is his passion for both the game and his country. After all their matches Artemyev oozed said passion and became one of Rugby World Cup 2019’s favourite people on and off the field.

Say what you want about other matters but Rugby World Cup’s social media team have been on the ball throughout the pool stages. Continuing on from their superb work on the World Rugby Sevens Series, the video edits have been excellent. This one, which was posted after Wales captain and lock Jones warmed up his neck during the anthems, worked wonderfully with a scene in the Lion King. There’s been other posts but this wins hands down.