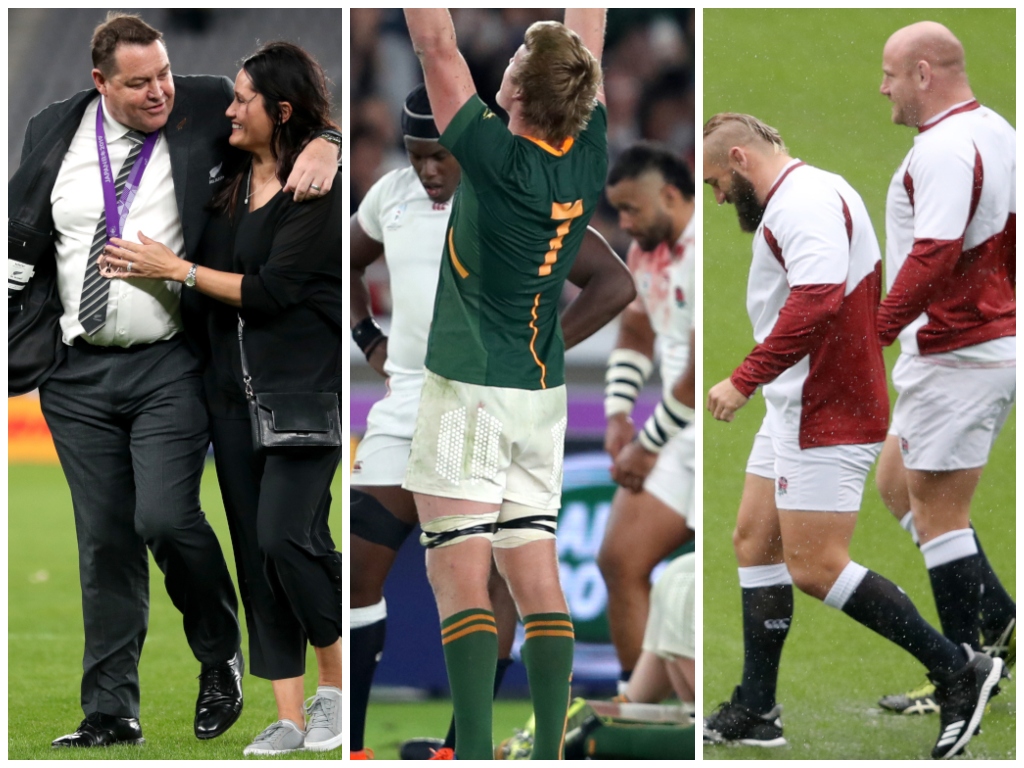 With the Rugby World Cup having drawn to a close after South Africa’s win, we have sat down to select our unique awards for players, teams and more.

After looking at the pool stages following the denouement of the round-robin phase, we have now primarily delved into the big talking points during the knockout stages.

If you missed our pool stage awards, here they are.

Wales’ encounter against France was the tightest but, in terms of quality, intensity and skill level, this was comfortably the best match. While England were the dominant side and produced one of their greatest ever performances, New Zealand did well to remain in the contest and created a couple of opportunities to almost turn the tide. The Red Rose repelled that, however, and deservedly emerged with a 19-7 victory.

With both these sides employing similar pragmatic game-plans, it was no surprise that there was little interesting to report when they faced off in their semi-final in Yokohama. A better spectacle was expected, especially after England and New Zealand dished up an entertaining display in the other semi-final the previous day, but the showdown between the Boks and their Welsh counterparts was characterised by plenty of territorial kicking. The encounter came alive during its latter stages when Damian de Allende and Josh Adams scored tries and the Boks eventually claimed a narrow 19-16 win, but the overall product left a lot to be desired.

The Springboks came in for plenty of criticism during the tournament for their style of play, especially after that dour win over Wales in the semi-finals, but they saved their best for last and delivered a brilliant all-round display to win the World Cup for the third time. An excellent forward performance set the tone for their backs, who also came to the party as the Boks showed they can mix things up by giving the ball some air in the latter stages of the final. That tactic proved a masterstroke and they were rewarded with two well-taken tries from Makazole Mapimpi and Cheslin Kolbe.

There were several massive tackles throughout the competition from the talented young Bath flanker, including a stunning hit on All Blacks captain Kieran Read, but this one especially sticks out. New Zealand were just edging themselves back into the contest when Barrett attempted to run out of his 22, but Underhill was there to smash him backwards and force the turnover. Soon after, George Ford kicked a penalty which helped England secure their place in the showpiece event.

They say defences win Rugby World Cup titles and that is certainly the case for the Rainbow Nation, who have played in three finals but are yet to concede a try. South Africa contested their first final during their World Cup bow in 1995 and secured a 15-12 victory after extra-time against New Zealand in Johannesburg. They then beat England 15-6 in Paris in 2007 to win the tournament for the second time. The Springboks and their opponents failed to cross the whitewash in both those games, but it was a different matter in this year’s final as they outscored England by two tries to none to lift the Webb Ellis trophy for the third time.

Both coaches have given so much to their respective national teams and probably deserved a more fitting send-off, but it did not diminish what they have achieved. For Hansen, he took over in 2012 and guided the All Blacks to the 2015 World Cup and a number of Rugby Championship triumphs, while Gatland’s résumé is arguably even more impressive. Considering Welsh rugby was at an all-time low following the defeat to Fiji in the 2007 World Cup, he helped them to four Six Nations titles, three Grand Slams and two semi-finals at the global tournament. It therefore seemed apt that their time in charge ended having faced each other on Friday.

"You've been one of the greatest @AllBlacks coaches. 15 years in this environment, two Rugby World Cups. How has it been for you?"

Steve Hansen: "It's been a privilege" #RWC2019 pic.twitter.com/GCuCGnmfFB

With the pressures, criticism and expectation of players, coaches and people in general life, this message from All Blacks head coach Steve Hansen was brilliant. Talking a day before his side were to face Wales in the Bronze Final, Hansen stepped in after Aaron Smith had spoken, showing just how highly he treats the issue. He might not have won the World Cup for a third time but he won plenty of admirers after this.

"It takes a lot to be vulnerable, because how people react to your vulnerability is going to allow you to do it"

Two absolute giants of the game were incredible leaders at this Rugby World Cup for their respective countries. Read, who now bows out of the international game, has always played with a smile on his face and is well respected by all his opponents the world over. The same goes for Jones – apart from the fact we do not yet know if he is retiring from Test rugby – as we ran out of superlatives for him long ago. How Wales replace him in their side whenever he calls it a day is a major worry as there’s been few better leaders in the history of the game.

Great respect between two true legends of the game.

Whenever there was a camera focused on England, these two never seemed to be far away from each other. While they have been Red Rose team-mates for years, the duo seemed to form a particularly special bond during the 2017 British and Irish Lions tour when they were the heartbeat of the midweek team. Following Marler’s return to the international squad, that relationship has been rekindled and it has produced some funny and touching moments.

This is how Dan Cole and @JoeMarler ended their press conference ahead of the Rugby World Cup final 😂❤️ pic.twitter.com/SINlvF4Kxu

One of the reasons fans have been able to see these characters has been because of the Red Rose’s exceptional ‘Rising Sons’ YouTube series, which has delved into the team’s World Cup campaign. It has given an excellent behind-the-scenes look at the side, from the start of their journey right until the end. The RFU employ enough communications people that they should be good at this sort of thing but, credit where it’s due, they’ve helped build some positive PR around this England squad.

South Africa’s first black captain is proof that one should never give up on your dreams regardless of your circumstances. The 28-year-old hails from a poor background and admitted earlier this week that he watched South Africa’s triumph in the 2007 Rugby World Cup Final at a local tavern because there was no television at his house in the township of Zwide, Port Elizabeth. Against all odds, Kolisi rose above his situation and became a professional rugby player. He persevered in following his dream and 12 years later, in his 50th Test, became only the eighth man to lift the Webb Ellis trophy as a captain.

"When I was a kid all I was thinking about was when I was getting my next meal." 🇿🇦@BryanHabana – 'I know Madiba is up there smiling down on you.' 👏

Quite what the French lock was thinking, only he really knows, but his act of stupidity and, well, thuggery, cost Les Bleus a place in the semi-final. With Jacques Brunel’s men 19-10 ahead against Wales, Vahaamahina bizarrely decided to elbow flanker Aaron Wainwright in the head, leaving referee Jaco Peyper with little option other than to send him off. The second-row’s team-mates battled and almost secured an unlikely victory, but France were left to rue an utterly disgraceful act by the Clermont forward.

The Springbok flanker was initially one of the unsung heroes of his team’s successful campaign but his superb form during the tournament eventually saw him rewarded with the World Rugby Men’s Player of the Year award. Du Toit was excellent as a ball carrier and gave his side much needed attacking momentum with some powerful runs. The 27-year-old was also a handy option in the lineouts, winning numerous balls at the back of the set-piece, and was outstanding on defence as he continuously emptied the tank with huge defensive shifts.