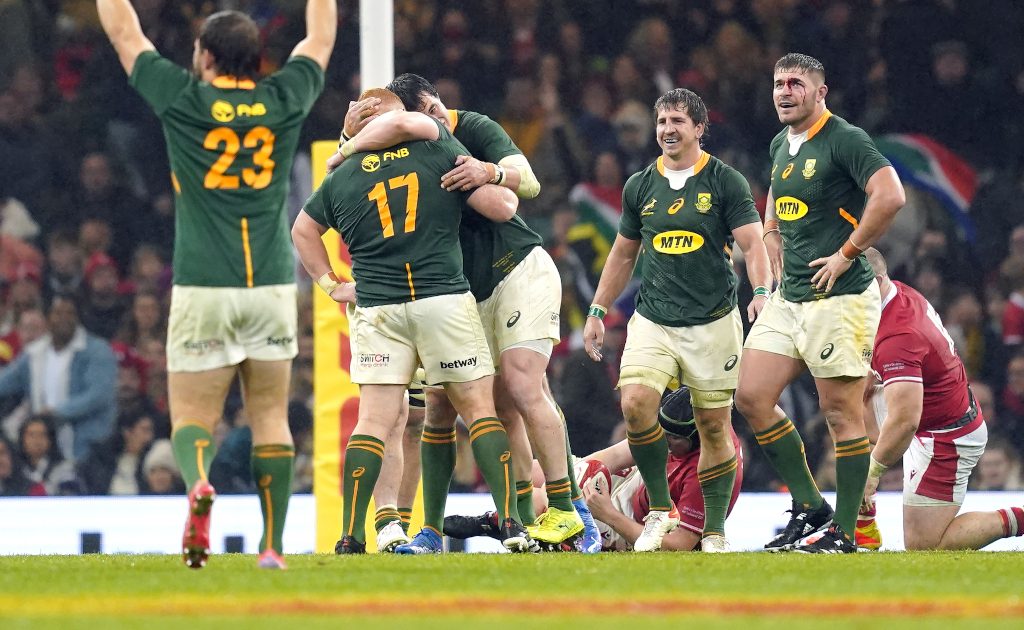 The Springboks must sharpen up their attack and game management ahead of their upcoming Autumn Nations Series clashes against Scotland and England.

When Jacques Nienaber succeeded Rassie Erasmus as Bok coach in January 2020, he spoke about the team’s goals for the next four-year cycle. Nienaber highlighted the importance of the 2021 series against the British & Irish Lions. He said that the Boks had to start winning away from home – against the All Blacks and the northern-hemisphere giants – if they wanted to be remembered as a truly great team.

Nearly two years have passed since Nienaber’s appointment. The Boks have beaten the Lions, and have claimed a rare away win against the All Blacks – albeit in Australia.

Hunting a clean sweep in Europe

If the Boks manage to beat Wales, Scotland and England this November, they will become the first South African team to win all their matches on a tour to Europe since 2013. Their record in the northern hemisphere over the past six or seven years, of course, shows that wins in this part of the world have been hard to come by.

The Boks beat Wales 23-18 in Cardiff this past Saturday to secure their first win against the Dragons since 2013. With that result, they’ve taken a giant leap forward. Wild celebrations by the players and coaches at the Principality Stadium certainly conveyed a sense of achievement.

While results like the win in Cardiff matter a great deal, the players and coaches will know that the team wasn’t at its best. The Boks have much to improve before tackling stronger teams like Scotland and England.

They were more composed and clinical in the second half than they were in the first. They kept Wales pinned deep in their own territory, and the decision to take a lineout instead of a shot at goal proved a masterstroke, as Malcolm Marx eventually crashed over the try-line. Their game management at the death was excellent.

Over the course of 80 minutes, however, the Boks let themselves down at key moments. Nienaber admitted as much afterwards. Poor discipline and decision-making prevented them from taking control of the contest at an earlier stage.

The Boks conceded 14 penalties – nine in the first half alone. While they forced as many as seven turnovers at the breakdown, they weren’t at their best in this area on attack or defence, leaking nine ruck penalties in all.

This led to a frustrating evening on attack. While the wet conditions contributed to a loss of possession at key moments, the Boks should have translated more of their dominance into points.

South Africa had Wales on the ropes at the scrums and mauls. Every scrum seemed to end with the Welsh set-piece backpedaling and crumbling. The Boks forced three penalties in this area.

They applied the pressure via the maul, and won a series of penalties that eventually led to Rhys Carre conceding a yellow card for his team’s repeated infringements.

Most teams would kill for that sort of platform. After winning the first phase, however, the Boks often squandered possession through poor handling or decision-making.

They enjoyed multiple entries into the opposition 22 and several clear chances to accumulate points that went begging. There were a couple of instances where they found space out wide, and up the middle – Damian de Allende’s line break serving as the best example – where a loss of composure ultimately resulted in the attack breaking down.

While their game management in the final quarter went a long way towards earning them the victory in Cardiff, it’s fair to say that a more clinical performance in the preceding 60 minutes would have allowed them to win by a more comfortable margin. In that scenario, they wouldn’t have needed to fight for their lives at the death.

The Boks will need to address their discipline around the breakdown if they want to succeed in the coming matches. Neutralising Scotland, who are among the world’s best in this area, will improve their chances of building a sustained attack and accumulating more points and tries.

The good news is that they have completed 80 minutes in challenging northern-hemisphere conditions. They have had the chance to adjust to the tempo of the game, and to the style of officiating. They should be better and wiser for the experience when they play the next fixture.

It won’t get any easier when they face a Scotland side stacked with Lions this Saturday, or when they tackle an attack-minded England at the back end of the tour.

Needless to say, the Boks won’t finish on the right side of the result at Murrayfield and Twickenham if they continue to spurn attacking opportunities, or if they fail to maximise the impressive weapons they have in their arsenal.