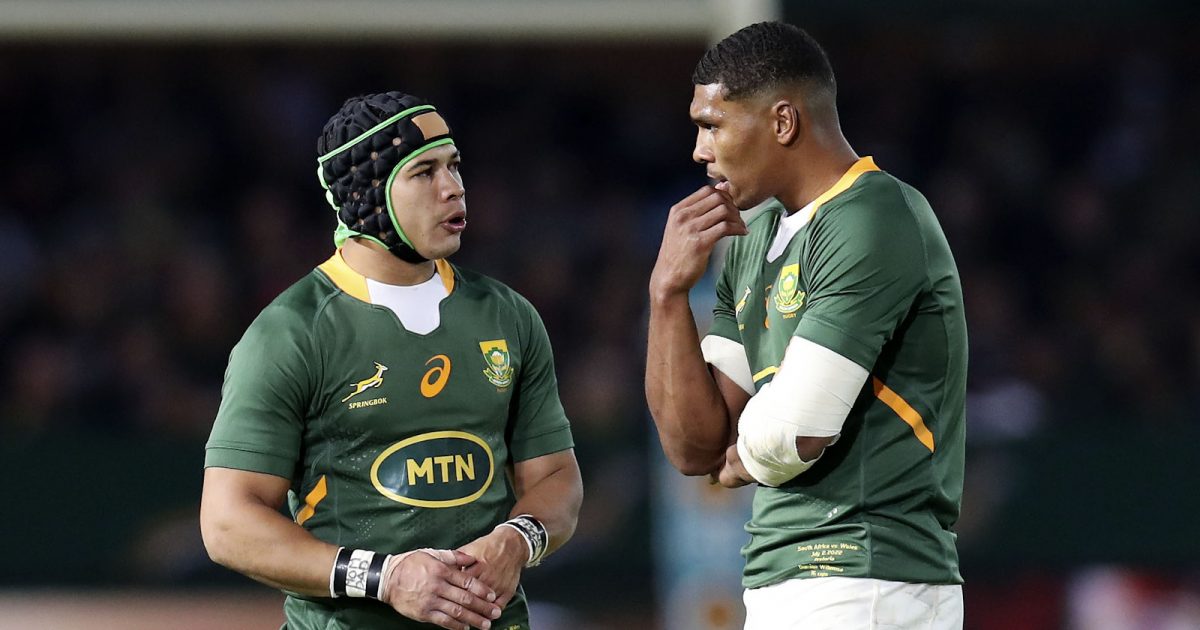 The statistics show how the Springboks’ first-half failings have jeopardised their quest for consistent results over the past 12 months, writes Jon Cardinelli.

There was a lot to like about the Boks’ performance in the first Test against Wales.

The pack fired in the second half to set the platform for four tries. Damian Willemse and Willie le Roux managed the game well in the closing stages, and Willemse showed remarkable composure to slot the winning penalty after the full-time hooter.

Who would criticise a team with the character to fight back from 18-3 down to win 32-29? It was one of the great Bok wins in isolation, and another example of this team’s ability to bounce back from what many might describe as a hopeless situation.

In a sense, this has become part of this team’s legacy.

At half-time on Saturday, social media was inundated with surprised fans and pundits. It didn’t take long, however, for some to recall past fixtures in which the Boks have overturned significant deficits to claim major wins.

The second-half comeback at Loftus Versfeld was, to some extent, expected.

Since Rassie Erasmus and Jacques Nienaber joined the setup in 2018, the Boks have played with renewed belief and vigour. The improved conditioning programme as well as the Bomb Squad-bench strategy has earned South Africa the World Cup title, a series win against the British & Irish Lions, and World Rugby’s number one ranking.

And yet, on many occasions – even in the wake of some thrilling victories – a couple of questions have persisted.

Why do the Boks find themselves in situations where they are trailing at half-time so often? And what might they achieve – in terms of results – if they put two good halves of rugby together on a consistent basis?

Over the past 12 months, statistician Russ Petty has posted the Boks’ first and second-half stats on social media to highlight the contrast. While the match at Loftus was an extreme example of such a deficit, it marked the eighth consecutive Test in which the Boks have trailed at half-time.

The Boks have consistently outscored their opponents in the second half of matches over this three-season period.

That said, they have lost nearly as many games (9) as they’ve won (10) when trailing at half-time.

The 2021 season was disrupted by Covid-19 outbreaks and related logistical challenges. And yet, that doesn’t fully explain why the Boks struggled to make their mark in the first half of big matches during this period.

They trailed at half-time in the second and third Tests against the Lions, yet managed to prevail via an improved second-half performance in both instances. They conceded early points to the All Blacks in the second Test on the Gold Coast, yet hit back late in the game to complete a monumental victory.

On the subsequent tour to the United Kingdom, they overturned narrow half-time deficits against Wales and Scotland to claim important wins.

That list of results highlights the quality and belief within the side. But again, the question about consistency persists: what could the Boks achieve in terms of overall results if they didn’t leave themselves with so much to do in the second half?

Consider the big games that they lost in 2021, where they failed to come back after trailing at half-time.

Australia led 19-11 at the break in the first Test between the teams in Rugby Championship, and 15-12 at half-time in the second. The All Blacks led 13-11 at half-time in Townsville, while England led 17-12 at the break at Twickenham. The Boks went on to lose each of those matches.

Test rugby is a war of attrition, and it’s not uncommon for top teams to wear each other down in the first half before cutting loose in the latter stages. The Boks, however, have developed a habit of leaking points early and then chasing the game.

They’ve shown that they can overturn big deficits – but not on every occasion. The stats indicate that when they head overseas, their chances of chasing a game diminish significantly.

The 2019 World Cup pool match against New Zealand is a great example, as the Boks trailed 17-3 at the break before outscoring the All Blacks 10-6 in the second stanza. Ultimately they lost 23-13.

That loss didn’t stop the Boks from winning the World Cup. Since then, however, the Boks have developed a habit of starting poorly, and it has cost them some big wins in isolation and ultimately led to a string of inconsistent results.

The Boks could win the next two Tests against Wales via a superior second-half showing. They have the bench to lift the intensity as well as the tempo in the closing stages.

Going forward, however, the Boks must strive for a more balanced performance across the two halves of every contest. Their defence, even more than their attack, needs to be more accurate in the initial stages – as does their kicking game.

Unless they address this shortcoming, they will not progress in the bigger matches and they will not obtain the results that are needed to win the Rugby Championship title.

If they manage to harness their traditional strengths from the outset, and to translate dominance into a half-time lead more often than not, then they will be very tough to beat.

READ MORE: July internationals Team of the Week: All Blacks dominate after fine win over Ireland