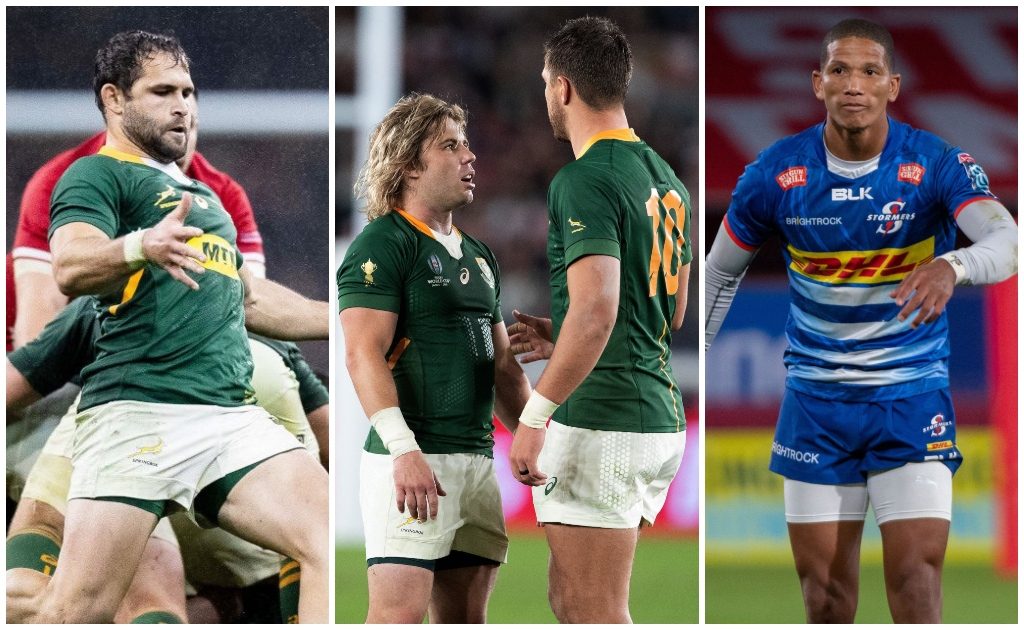 Springbok head coach Jacques Nienaber looks set to give most of his senior players some much-needed game time against Wales, but may be forced to blood new talent at scrum-half and fly-half, writes Jon Cardinelli.

Nienaber initially planned to name an extended Bok training squad this week. The United Rugby Championship league stage has concluded, and the Boks will attend a training camp in Pretoria from June 6 in preparation for the three-Test series against Wales – which begins on July 2 at Loftus Versfeld.

Recent events, however, have forced a change in plans.

The Stormers, Bulls and Sharks – who supply most of the South Africa-based Springboks – have qualified for the United Rugby Championship play-offs. The Stormers will face Edinburgh in Cape Town next week, while the Bulls will host the Sharks in Pretoria. The upshot is that one South African side – and possibly two – will feature in the semi-finals on June 11.

There’s been plenty of speculation about Nienaber’s first squad of the 2022 season. Experienced Boks based in Europe and Japan are expected to feature prominently, while senior local players and a clutch of promising youngsters could comprise up to 50% of the group.

In terms of selection, Nienaber faces a delicate balancing act this July.

A handful of senior players are desperate for game time, having missed large chunks of the 2021 Test season – as well as the whole of the 2020 international season due to Covid-19.

And yet, there is good cause to experiment with younger and less experienced players in a series of this nature, before the Boks turn their attention to the Rugby Championship and subsequently to a tough tour of Europe.

The South African teams have lit up the URC, and many of the players have advanced their cause for national selection. That said, fans and critics would do well to remember the incumbents, some of whom are returning from injuries. Out of sight should not mean out of mind.

Remember the 2019 World Rugby Player of the Year? Pieter-Steph du Toit won the 2019 Rugby Championship and the World Cup with Boks. Since then, the blindside flank has played just three Tests in the space of 19 months.

Du Toit made a successful return from a shoulder injury for his club Toyota Verblitz in January. After missing so much Test rugby, Du Toit should be given an extended opportunity to regain his form.

Given that Du Toit has formed such a successful partnership with Siya Kolisi and Duane Vermeulen in the past, one would expect Nienaber to give this back-row combination a fair opportunity to re-establish itself across the three Tests against Wales.

Cheslin Kolbe was one of the stars of the 2019 World Cup. Despite not playing a single Test in 2020, the France-based Bok excelled at club level and was universally hailed as one of the best players in the world.

In 2021, Kolbe played just four Tests for the Boks before succumbing to a serious injury. The wing is currently recovering from an unrelated thumb ailment, but should be good to go by July.

Like Du Toit, Kolbe should receive an extended opportunity to settle in a familiar combination – and few back-three partnerships offer the same balance as that of Makazole Mapimpi, Kolbe and Willie Le Roux.

The Boks are spoiled for choice in the back-three department at present, and yet it wouldn’t surprise me to see Nienaber favouring the World Cup winners over those excelling in the URC.

Damian Willemse and Aphelele Fassi – who was part of the squad for the duration of the 2021 season – appear to be next in line for an opportunity. URC fan favourites such as Kurt-Lee Arendse and the tournament’s top-scorer Leolin Zas may have to wait.

That is just class from Kurt-Lee Arendse 👏

That said, it would be a shame if Warrick Gelant wasn’t rewarded for his outstanding URC form at some point.

The Stormers full-back has the skill-set to succeed in the Bok game plan. Like Le Roux, Gelant is a full-back who spends a lot of the game in the fly-half channel.

Vermeulen and Frans Malherbe – stalwarts of the 2019 team – featured in seven and eight games respectively in 2021. Both veterans will need to be managed smartly by club and country in the lead-up to the next World Cup, but could do with an extended run at Test level at this stage.

Faf de Klerk is yet another who needs time on the park, having played six out of a possible 13 Tests in 2021.

Nienaber should be aiming to strengthen his first-choice half-back combination. De Klerk (Sale Sharks) and Handré Pollard (Montpellier) haven’t played a lot of rugby together over the past two years.

De Klerk and Pollard won’t play in all of the Boks’ 13 Tests this year, however, and at some stage, Nienaber will need to back his second – or even third-choice option.

Cobus Reinach has already been ruled out of the three-Test series against Wales. Herschel Jantjies is struggling with a hand injury and hasn’t featured in recent matches for the Stormers.

If Jantjies doesn’t recover, in the coming weeks, one of the Sharks scrum-halves – Jaden Hendrikse or Grant Williams – could find themselves in the Bok matchday mix.

It’s unclear whether Elton Jantjies will be available for the series. The Bok fly-half – who is also recovering from a long-term injury – was recently arrested following an incident on a flight between Dubai and Johannesburg. Jantjies will appear in court again next month.

Morné Steyn, the third specialist fly-half used by the Boks during the 2021 Test season, has retired from international rugby. Nienaber has spoken about Willemse and Frans Steyn as fly-half options, but it remains to be seen whether these players will be treated as fly-half specialists when an alternative to Pollard is required.

Jordan Hendrikse may well be fast-tracked into the Bok matchday squad for the coming series. The former South Africa U20 fly-half has impressed for the Lions over the course of the URC, and may take his game further if he’s brought into the national set up.

Hendrikse’s lack of experience may be viewed as a negative. And yet, the Boks find themselves in a situation where they have no experienced fly-half specialists outside of Pollard and Jantjies.

The Boks might try to survive the three-Test series against Wales with one half-back combination. It’s a tactic that could do them more harm than good down the line.

It may be better to blood Hendrikse or another young fly-half against Wales than to play them against the All Blacks during the Rugby Championship.

Boeta Chamberlain of the Sharks is another on the Bok radar, as is the Stormers’ Manie Libbok.

Unlike Hendrikse, both will be in action for their respective franchises in the URC play-offs, and both will have the chance to show why they deserve an opportunity at national level.

Libbok in particular has impressed over the past few months for a resurgent Stormers side. His game management will be in the spotlight when the Stormers compete in the play-offs.

If Libbok passes that test, he may well find himself in the frame for a Bok Test cap.