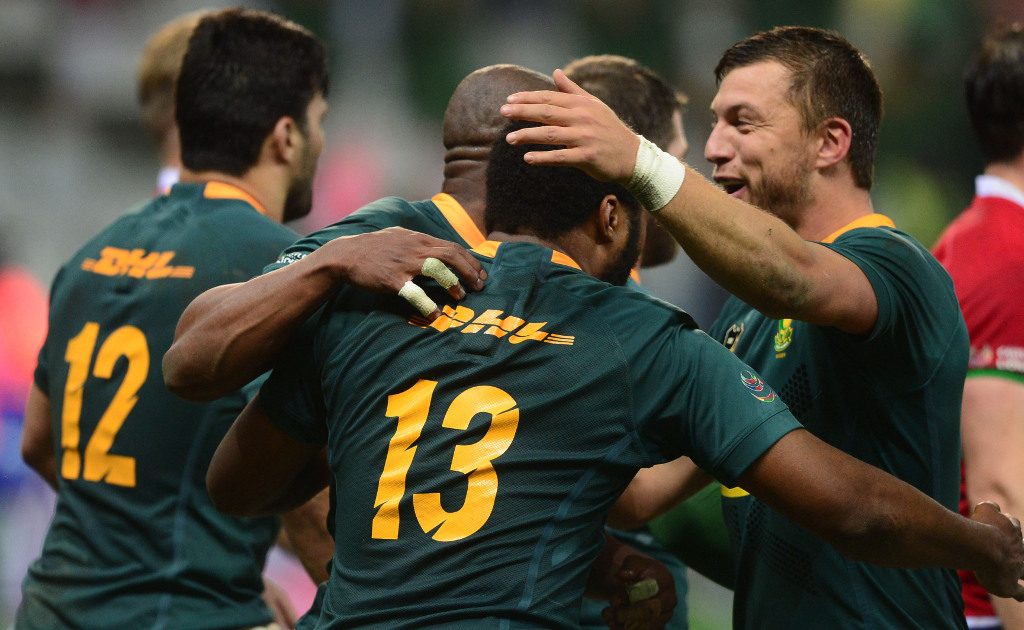 Before the end of May, Springboks head coach Jacques Nienaber will name the first official squad of the year. It might be a complete cliche to suggest it’s a selection that will be giving him sleepless nights, but it’s no exaggeration that South Africa’s player resources have rarely been this plentiful.

Besides the array of world-class players plying their trade abroad, the local game is in rude health, with the Bulls, Sharks and Stormers all flexing their metaphorical muscles on the way to booking berths in the United Rugby Championship play-offs. And while the Lions might be down in 11th spot, they have been far from easy-beats this season.

In part one of this article series, we take a look at each position in the backline in order to paint a clearer picture of the Boks’ enviable depth across the board (*Part two will be published next week).

This is a position where there is an abundance of depth for the Springboks. All of the so-called ‘back-up’ players have been in outstanding form for their respective franchises in the United Rugby Championship, but Le Roux is the man Rassie Erasmus and Nienaber have backed consistently as the first-choice full-back since 2018. That is likely to remain the case through to the 2023 Rugby World Cup, although there would be value in expanding the Boks’ depth by providing ample game-time to the players next in line over the course of the 2022 Test season.

Kolbe is expected to recover from thumb surgery in time to face Wales in the mid-year Tests. There is a chance Nkosi may also be close to completing his injury rehabilitation, with his recovery from ankle surgery likely to take between six and eight weeks. Interestingly, Senatla earned an invite to the Boks’ recent alignment camps and will join fellow former sevens superstar Specman as someone the Boks could look at when needed.

As arguably the leading outside centre in world rugby, Am is entrenched in the number 13 jersey for the Boks, offering key value on both attack and defence. However, he did carry a heavy workload last year, and quality players such as Kriel and Simelane do need to bank some game-time as back-up options in case of injury.

De Allende has quickly established himself as one of the greatest inside centres to have ever played for the Springboks, with the 30-year-old now boasting 58 Tests to his name. Very little would displace him from the number 12 berth, but the Boks are blessed with back-up players that would walk into the starting line-up of most other Test nations.

In a Springbok context, Mapimpi is probably as close to an irreplaceable player as you can get. Ever since making his Test debut, he has racked up 20 tries in 25 Test appearances, and is such an integral part of the Bok system under Erasmus and Nienaber. It’s a pity that Madosh Tambwe isn’t available to provide back-up due to the fact the Congo-born flyer isn’t qualified for South Africa as yet. However, Fassi, Zas and Van der Merwe are all bona fide excitement machines.

With 60 Test caps to his name and nearly a decade of experience at Test level, 28-year-old Pollard is primed to be at his peak by the time the 2023 World Cup rolls around. Understandably, he has a firm grip on the number 10 jersey, although there is more than enough back-up depth available, with Jantjies having served capably as his deputy for some quite some time.

The first-choice Bok backline virtually picks itself, with experienced De Klerk serving as the cog around which the Springbok gameplan so often revolves. Reinach is set for a long-term injury-enforced absence, though, which really leaves the back-up berth available to any of Jantjies, Hendrikse or Williams depending on form.