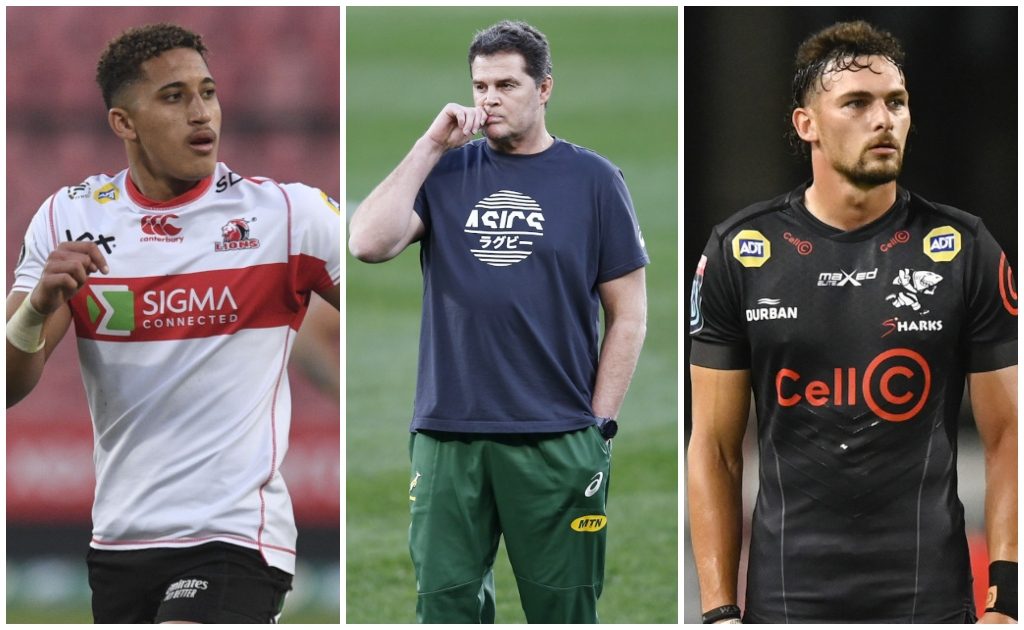 The United Rugby Championship will reveal whether the Springboks have the strength in depth to tackle England with a completely South-Africa based side in late November, writes Jon Cardinelli.

The good news for the Boks is that director of rugby Rassie Erasmus has served his 60-day ban and will resume his role at SA Rugby this week.

This past November, World Rugby ruled that Erasmus’ behaviour towards match officials during the British & Irish Lions series amounted to misconduct. Apart from a two-month suspension from all rugby activities, Erasmus has been banned from traveling to Tests with the Boks until September 30, 2022.

Erasmus and coach Jacques Nienaber need to plan carefully for the coming Tests, and for the lead-in to the 2023 World Cup. Providing there are no serious Covid-19 disruptions, the Boks will host Wales for a three-Test series during the July window before switching their attention to the Rugby Championship.

This season – and for the first time since 2018 – the Boks will play four Tests instead of three over the month of November, the last of which falls outside the World Rugby-sanctioned international window.

Unless SA Rugby manages to strike an agreement with the individual clubs, the Boks will face England on November 26 without their overseas-based stars.

Some of the coaches and senior players are still hurting after last year’s defeat at Twickenham. It’s fair to say that the two losses to Australia, the defeat to New Zealand, and that near-miss against England will leave an otherwise accomplished group with something to prove in 2022.

But can a completely South Africa-based team succeed where the best available Bok side failed?

Broadly speaking, South Africa have the strength in depth to cope with major injury setbacks in just about every position. In 2019, Erasmus split his squad and deployed his ‘A’ and ‘B’ team according to the opposition or logistical challenges such as overseas travel.

In 2021, the Boks still managed to win big matches when star players like Pieter-Steph du Toit, Cheslin Kolbe, Faf de Klerk and Frans Malherbe were unavailable due to injuries.

A closer look at the wider squad, and indeed the teams selected during the Erasmus-Nienaber era, confirms that the Boks have relied heavily on overseas-based players in recent times. More than 500 South Africans are playing professional rugby abroad, and there are enough players with international experience in the top leagues of Europe and Japan to fill three Springbok XVs.

It’s been a long time, however, since a Bok coach was forced to pick a team of South Africa-based players. Allister Coetzee was hamstrung by SA Rugby’s strict overseas-player policy in 2016 and 2017, and the team produced some of South Africa’s worst results.

When two games were staged outside of the international window in 2018 – both against Wales, firstly in the USA in early June and then in Cardiff in late November – Erasmus was forced to lean on local talent. The Boks lost on both occasions.

While top South African players are in high demand at clubs around the world, the standard of rugby within South Africa has declined over the past five or six years. The local franchises battled during the latter days of Super Rugby, losing regularly away from home and failing to challenge the better New Zealand sides in the play-offs.

The Bulls, Lions, Sharks and Stormers have struggled during the initial rounds of the inaugural United Rugby Championship, especially when their more experienced players have been away on international duty.

Private investors are attempting to steer the Bulls and Sharks in a more promising direction, and if those teams manage to retain more of their star players, they will be a greater force in the URC and, providing they qualify, the Champions Cup.

The Boks would benefit from the franchises’ improved retention of players. The national coach would enjoy more access to top players over the course of the year and in situations where Tests fall outside of the international window.

17 out of 32 players that toured the United Kingdom last November are based at overseas clubs. Other big names that missed that tour – Du Toit, Kolbe and De Klerk – are also based abroad.

The Bok team boasted no fewer than seven overseas-based players in the starting XV across the three matches. Nine players who ply their trade abroad – plus Trevor Nyakane, who committed to Racing 92 thereafter – started in the season finale against England at Twickenham, while a further five were on the bench.

The Boks do have some special players competing for the local franchises. This group includes players who have won the World Cup and beaten the Lions.

But do they have enough quality to offset the loss of 13 or more frontline players when the team returns to Twickenham this November? And if they lose local heroes such as Siya Kolisi and Lukhanyo Am to injuries before that crucial match, do they have others who are capable of stepping into the breach? The next few months may provide us with answers.

The Currie Cup commenced this past Friday. This once great tournament has become a feeder to bigger and more important competitions such as Super Rugby and the URC.

Covid-19 has disrupted the campaign, but after more than a month on the sidelines, the top South African players will be back in action this weekend.

Erasmus and Nienaber will be watching closely, particularly in matches where the South African teams are pitted against sides from overseas. While the Boks have built up some depth over the past four years, they are not yet in a position where they can beat top Test teams with a side made up exclusively of South Africa-based players.

Perhaps the biggest area of concern is at fly-half. Handré Pollard will move from Montpellier to Leicester later this season, while second-choice Elton Jantjies has committed to playing club rugby in Japan.

Curwin Bosch looks set to leave the Sharks for a gig in France, while it remains to be seen if Bulls pivot Johan Goosen, who is recovering from a serious injury, will be available for the 2022 Test season.

Jordan Hendrikse impressed for the Lions in the early stages of the URC before sustaining a serious injury of his own. It will be interesting to see how much game time Nienaber gives Hendrikse – or other promising youngsters such as the Stormers’ Kade Wolhuter and the Sharks’ Boeta Chamberlain – over the course of the 2022 season because one of these players is likely to feature in that fixture against England at the end of the year.