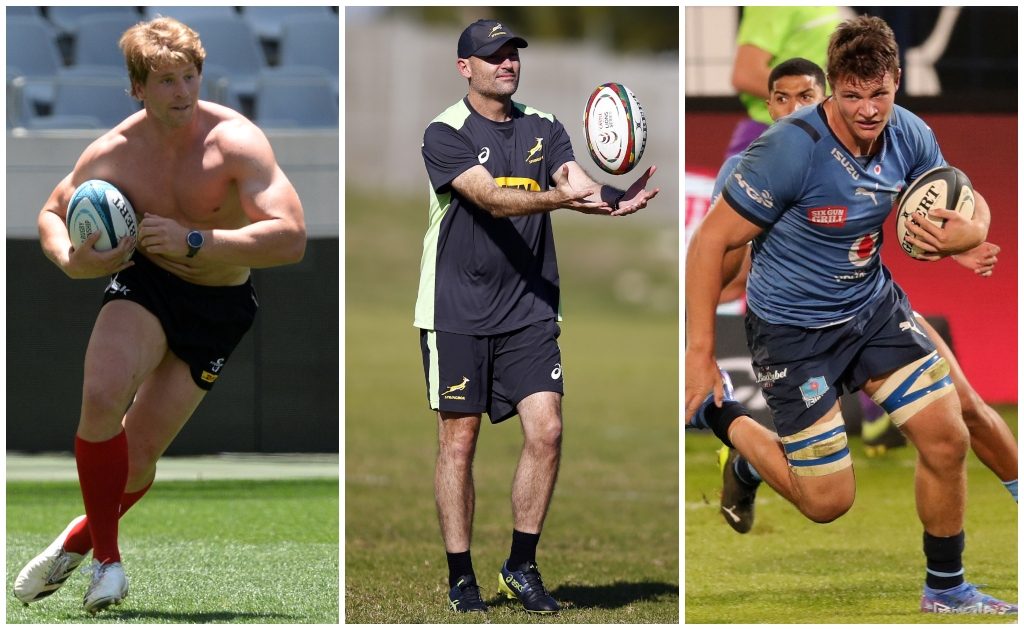 South Africa-based loose forwards Evan Roos and Elrigh Louw might fill the void when the Springboks travel to Twickenham this November without a host of frontline players, writes Jon Cardinelli.

England will host the Boks on November 26 in a match that falls outside of the World Rugby-sanctioned international window. Clubs in Europe and Japan are not obligated to release their players in this period, and so many of the Boks plying their trade overseas will be ineligible for the showdown at Twickenham.

That fixture may be 10 months away, but already there is talk in South Africa about who will step into the breach. The Boks’ first-choice side is stacked with overseas-based players, while a large number of second-choice players also play their club rugby abroad.

Challenging situation in the back-row

While the primary concern is at fly-half – where the Boks have two overseas-based players in Handré Pollard (Montpellier) and Elton Jantjies (NTT Red Hurricanes), as well as a few home-based alternatives – there is an equally challenging situation in the back-row.

There are dozens of South African loose forwards starring in top leagues around the world, yet relatively few players with international experience representing the local franchises – the Bulls, Lions, Sharks and Stormers – in the United Rugby Championship.

The upshot is that the Boks are likely to field a completely new back-row combination against England later this year.

Bok coach Jacques Nienaber used nine loose forwards across 13 Tests in 2021. Of those nine, only one – Bok skipper Siya Kolisi – is based in South Africa, with the Sharks.

Jean-Luc du Preez (Sale Sharks) was brought into the squad as a utility forward, and played one game for the South African ‘A’ side at lock before he sustained a serious injury.

That list certainly puts things into perspective. South Africa’s loose-forward depth may be the envy of much of the rugby world, but when you remove the overseas-based players from the equation, you remove a wealth of quality and experience.

Consider the other Bok loose forwards that played Test rugby in the Rassie Erasmus-era (2018-2019). Francois Louw and Warren Whiteley have since retired, while Oupa Mohoje is representing the Cheetahs in a watered-down Currie Cup.

Veteran Marcell Coetzee has been impressive for the Bulls since returning to South Africa two years ago. It’s hoped that Sharks number eight Sikhumbuzo Nothse will bounce back from injury and regain the form that marked him as one of South Africa’s best players in the truncated 2020 Super Rugby tournament.

You wouldn’t blame Nienaber for turning to a more experienced player for a clash as demanding as England away from home. Coetzee has a good understanding of northern-hemisphere conditions, having represented Ulster between 2016 and 2021. The 30-year-old also has the ability to slot in at number 6, 7, or 8. At the very least, he would be a valuable utility option from the bench.

Then again, perhaps Nienaber should be using the fixture – and indeed the entire four-game tour to Europe – to build towards the 2023 World Cup. As we’ve witnessed in recent United Rugby Championship matches, there are several promising loose forwards pushing for higher honours.

There’s no risk of these young guns supplanting a player like Vermeulen at this stage. Nienaber has already convinced the decorated number eight to stay on with the Boks until the end of the World Cup in France.

When I interviewed the senior statesmen recently, however, he spoke as if his position wasn’t guaranteed, and highlighted the threat of the young guns pushing for a spot in the team.

“I’m not expecting any favours,” Vermeulen said. “A lot of players have put their hands up recently.

“Jasper Wiese has shown that he can step into that number eight jersey when required. Evan Roos had a fantastic season for Western Province in the Currie Cup. I was really impressed by the way he played.

“The Boks won’t want for options over the next two years, which means I will have to show why they must pick me.”

Roos was outstanding in the Stormers’ recent win against the Bulls at Loftus Versfeld. The 21-year-old carried strongly to give his side an edge at the gainline.

Vermeulen played alongside the 22-year-old Elrigh Louw during his stint with the Bulls franchise in 2020 and 2021. Louw is similar to Vermeulen, a hard player who relishes contact.

While the Bulls went down to the Stormers this past Saturday, Louw scored a try by repelling several would-be tacklers en route to the try-line. He started the match at number eight, but can also serve as a destructive blindside flank when required.

It’s believed that Nienaber is watching the URC closely with a view to the coming Test season, and to the final match of the year. He has to find South Africa-based players that can perform against England.

Players who are earmarked for that Test at Twickenham will be blooded well before the end-of-year tour to Europe, though. They will be trialled in combination with Kolisi, the only current Bok loose forward based in South Africa.

Indeed, it wouldn’t surprise to see Roos or Louw – or even both – facing Wales at some stage over the course of three-Test series in South Africa this July. The planning for the international season, and indeed the tricky season finale against England at Twickenham, is well underway.