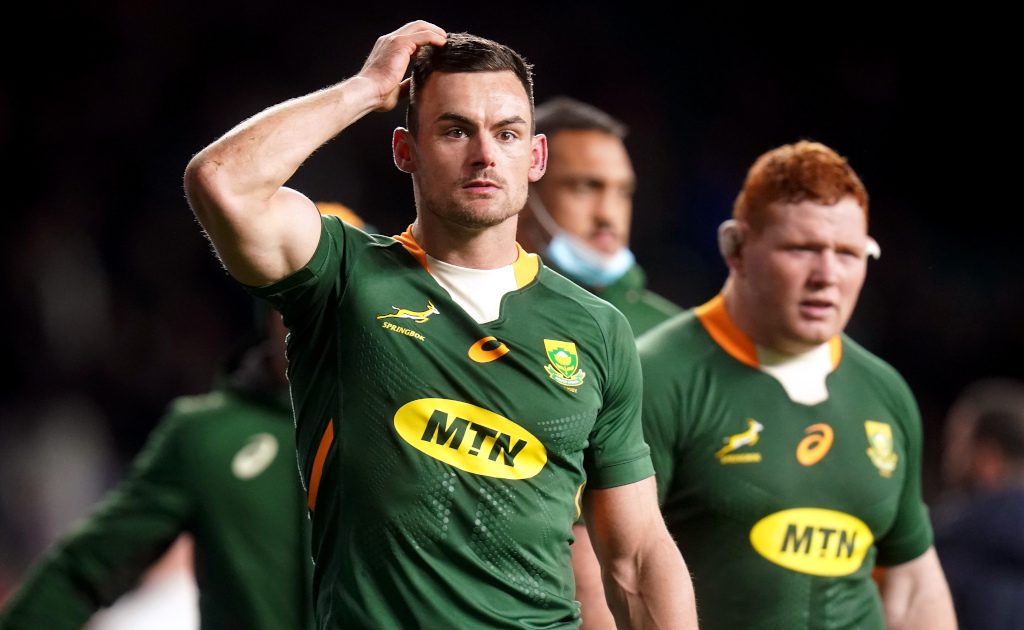 The nature of the defeat at Twickenham will rankle a Springbok side that has developed a habit of losing big contests at the death, writes Jon Cardinelli.

Rugby fans could not have asked for a more dramatic climax to the Autumn Nations Series. Shortly after a young and exuberant England side stunned South Africa at Twickenham, France completed one of the most systematic demolitions of the All Blacks in recent memory.

The Boks will finish the year as the world’s number one ranked side, while the All Blacks – despite the losses in Dublin and Paris – will remain the team to beat.

Take nothing away from England, Ireland or France, but the Boks and All Blacks have dealt with a host of off-field issues over the past few months. A drop in performance at the back end of one of the most gruelling seasons in history must be seen in perspective.

And yet, both teams will go into the international break with much to rectify. The number one ranking might suggest that they’ve enjoyed a great season, but closer analysis reveals how the Boks have underperformed in specific areas. They should not be satisfied with a record that reads eight wins and five losses.

The Boks overcame a series of Covid-related challenges in the lead-up to the series against the British & Irish Lions, and were forced to spend more than three months in a bio-secure environment. They had to adapt again after sustaining several serious injuries across the Rugby Championship. They tackled the All Blacks – and subsequently Wales, Scotland and England – without big names such as Pieter-Steph du Toit, Cheslin Kolbe and Frans Malherbe.

Taking all of that into consideration, they should, as coach Jacques Nienaber insists, be proud of what they have achieved in 2021.

At the same time, they may look back at certain Tests with nothing but regret.

So much has been said and written about Rassie Erasmus’ response to the officiating performance in the first Test between the Boks and Lions on 24 July. The fact of the matter is that the Boks weren’t at their best in that fixture. They had their chances to close out the contest and to take a 1-0 lead in the series, but failed to show the necessary accuracy and composure.

That the Boks have the tools to be the best team in the world – and to dominate Test rugby much like Steve Hansen’s All Blacks did between 2012 and 2017 – is not up for debate.

Over the course of the 2021 season, they’ve been world-leaders in departments such as the scrum, lineout, and breakdown. They boast the best defensive system in the world, some of the finest tactical kickers on the planet, and some of the game’s most dangerous attacking players in Kolbe, Makazole Mapimpi and Lukhanyo Am.

They don’t want for attitude or character. They showed their grit in the third and decisive Test against the Lions, and then in the last match of the Rugby Championship against the All Blacks on the Gold Coast. More recently, they ground out a valuable win against Wales to end an eight-year drought in Cardiff.

Consistency has been a problem, though. Over the past few months, they have drifted in and out of matches. They have battled to translate forward dominance into points, and have routinely failed to apply the killer blow when they’ve had opponents at their mercy.

It may seem a harsh criticism of a team that’s ranked number one in the world. But make no mistake, this Bok team is yet to realise its full potential, and should be looking to kick on in 2022 and beyond.

Discipline was a problem for the Boks in the first fixture against the Wallabies on the Gold Coast, but they went into the final moments of that clash with the lead. A series of errors by the visitors, and a botched final scrum, gifted the Wallabies the chance to kick the winning penalty.

They doubled down on their kick-chase tactics in the first match against the All Blacks in Townsville, and that game plan was largely effective. They had the momentum as well as the lead in the latter stages, until a couple of unforced errors – Handré Pollard’s aimless kick at a time when the Boks had a scrum advantage – handed the New Zealanders the opportunity to snatch a victory.

It’s fair to say that, through better game management, the Boks might have won five of their six Rugby Championship games, and defended their title. As it was, they finished the tournament with a 50% record and in third place in the table.

The most recent performance at Twickenham was equally frustrating in that the Boks’ dominance was not reflected on the scoreboard. While individual gladiators like Eben Etzebeth battled heroically at the death to salvage a result, the collective struggled to manage the contest.

The defence should be scrutinised for leaking three tries. Questions should be asked about the leaders and the back division, after the Boks failed to harness the awesome power at the scrum and maul to maximum effect.

Any team in the world would kill for that set-piece platform. The Boks should be putting young and inexperienced teams away by 10 or more points instead of losing by one or two. They should have beaten England by a comfortable margin this past Saturday after hammering the hosts at the scrums and mauls.

For all of their attacking misfires, they still managed to play themselves into a position of strength at the death. When Frans Steyn slotted a penalty after 72 minutes, it was the Boks’ game to lose.

Then Siya Kolisi conceded a soft penalty and a yellow card. The Boks did well to win the ball back thereafter, and shaped to close out the contest. Then Herschel Jantjies got himself into a tangle at the breakdown while taking an age to clear the ball. England forced a turnover.

Then the Boks found themselves scrambling to defend inside of their own half – when they should have been playing out the final moments deep in England territory. Tempers boiled over. They lost their heads, conceding a couple of quick penalties in their own 22. Marcus Smith was given a simple shot at goal to win the game.

It was a case study of how not to close out a game. Credit to England, a team featuring a host of young players. They got under the skins of the more experienced South Africans. But the Boks will know that they let a golden opportunity to win at Twickenham – for the first time since 2014 – slip.

Nienaber is right to be proud of his charges after such a challenging year, and perhaps the performance at Twickenham was that of an emotionally exhausted team that has been to hell and back.

But as the Bok coach has pointed out, this team has moved on from the 2019 World Cup and the 2021 Lions series. It is building towards the next global tournament in France. It should hold itself to a higher standard.

Unless the Boks cultivate a killer instinct, they will not realise their ambition to claim back-to-back World Cup titles. The result at Twickenham served as a reminder that they have plenty of work to do in the lead-up to 2023.