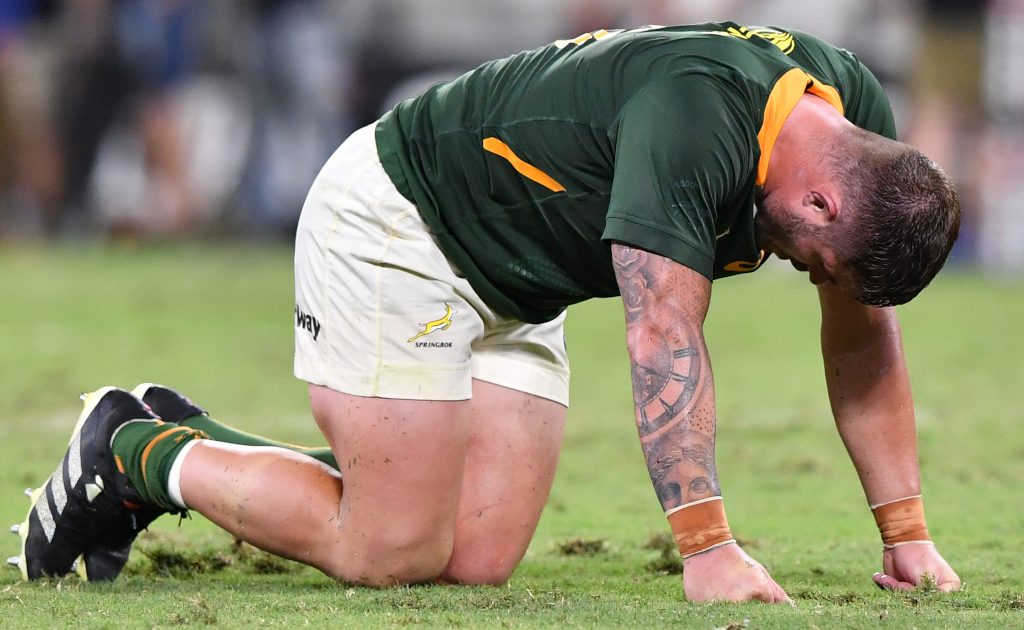 The Springboks were left to chase the game in nine of their 13 Tests this season after delivering erratic first-half performances on both attack and defence.

Since the Boks won the 2019 Rugby World Cup, fans and pundits have waxed lyrical about the ‘Bomb Squad’, South Africa’s world-class bench that has the ability to destroy opponents in the latter stages of a Test match.

The stats certainly support the assertion that the Boks are a more explosive team at the back end of a game.

The numbers also confirm that South Africa’s defence grew stronger as the contest progressed. They averaged fewer points (6) and tries (0.4) conceded in the second stanza.

Fast forward two years, and it would appear that little has changed.

No analysis of the Boks in 2021 would be complete without an acknowledgment of the off-field challenges that have hampered the side’s development.

The entire 2020 season was lost due to Covid-19 restrictions. While the Boks were given the green light to resume in 2021, they were forced to make sacrifices.

They spent three months in a bio-secure bubble over the British & Irish Lions series and the Rugby Championship. No team should be expected to progress, let alone win major Tests, in such conditions.

And yet, the Boks finished the 2021 season with an 8-5 record and at the top of the World Rugby rankings. They beat the Lions 2-1, and managed to claim an important away victory against the All Blacks.

While there were elements of their game that proved effective in 2021 – the scrum, lineout, maul and kicking game – they struggled to maintain a high level of performance on attack and defence, and lost a few games that they should really have won.

Perhaps the physical and mental exhaustion of living and training in a bio-bubble took its toll on the team. Regardless of the challenging circumstances, perhaps certain players underperformed.

Whatever the case, the Boks fired in patches, and were especially susceptible in the first half and occasionally at the death of big games.

The Bomb Squad deserves a lot of credit for raising the level of physicality and intensity whenever they are introduced. The Boks trailed at half-time on nine occasions in 2021 – twice against the Lions, twice against Australia, twice against New Zealand, and subsequently against Wales, Scotland and England. They went on to win five of those matches, and it’s fair to say that the Bomb Squad influenced those results.

People have come to expect a lift in performance in the second half of matches. Few, however, have demanded to know why the Boks find themselves chasing a game in the first place.

The Boks failed to create and convert sufficient opportunities in the first half of matches in 2021. According to the stats, the South African defence has been at its most vulnerable during the opening stages of a contest.

The big games of 2021 provided a few examples. The Boks conceded as many as five tries to Australia over two matches. Three of those five tries were conceded across the first halves of those games.

The Bok defence remains a formidable force when one considers that the team conceded 19 points and 1.3 tries per game in 2021.

But as the numbers and the examples above confirm, there have been some worrying lapses that have put the side on the back foot and cost them the game in several instances.

It’s also worth noting that the 2021 averages represent a year-to-year decline, as the Boks conceded just 12 points and 0.9 tries on average in their previous season (2019).

Defence is closely linked to attack in the modern game, with a focus on the transition from the former to the latter. The Boks worked hard to create and convert counterattacking chances in 2019, but were less clinical from turnover ball in 2021.

Overall, the attacking stats for the 2021 season don’t make for pleasant reading. While the team deserves praise for its exemplary scrummaging and mauling, questions need to be asked about the inability to translate such dominance into territory and points.

Tactical kicking remains an integral – and largely effective – part of the South African game plan, but the quantity and quality of the box-kicking, and the option-taking in general when in possession, left a lot to be desired.

Rugby statistician Russ Petty recently tweeted the year-to-year comparisons of all top teams, and the numbers confirmed that the Boks had declined in most areas apart from kicking from hand. 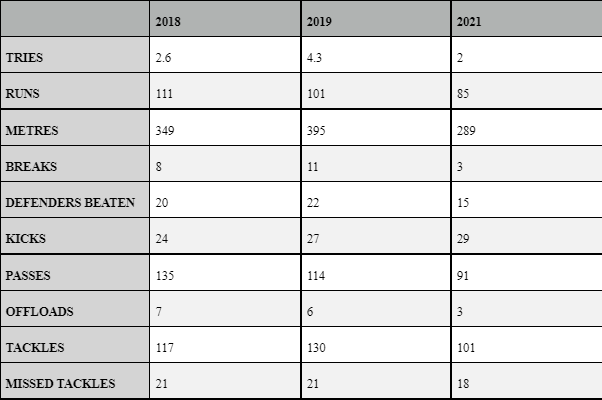 Kicking has always been a key part of the game plan in the Erasmus/Nienaber-era. In 2021, however, the Boks averaged more kicks (29) from hand than previously, and struggled to strike the right balance between kicking and running.

In the first match against the All Blacks in Townsville – which the Boks went on to lose – they completed a whopping 38 kicks in play. In the second fixture on the Gold Coast – which they won – they executed 27 kicks but showed far more intent – and potency – with ball in hand.

While the Boks boast a number of gifted attacking players, they are generating significantly fewer line breaks per game – eight fewer than was the case in 2019.

While these certainly aren’t the only metrics that warrant attention, they do suggest that the Boks are struggling to vary their approach.

What’s more, when they do generate the odd line break or manage to create space in the wider channels, they often fail to finish.

Eben Etzebeth stormed through the heart of the England defence this past Saturday, and then proceeded to lose the ball. That move summed up the Boks’ attacking form in 2021.

After laying the platform with their set-piece, and after putting players into space, the Boks struggle to take things further.

Every Test team will bemoan such missed opportunities over the course of the season. The problem for the Boks is that they’re creating fewer chances than most top sides. When they fail to make those opportunities count, it can mean the difference between a win and a loss.

An inconsistent goal-kicking display has also hampered their ability to control and even win matches.

Morné Steyn came on to slot a couple of important kicks in the latter stages of the third Test against the Lions, and ultimately sealed the game and the series for the hosts. Steyn wouldn’t have been needed, of course, if Handré Pollard wasn’t battling with his goal-kicking.

The first-choice fly-half missed a goal-kick during the latter stages of the first Test against the Lions that may have influenced the final result. He missed two more attempts in the second match of the series, and a further two kicks in the decider.

While the collective must take responsibility for the poor game management that contributed to several narrow losses, it’s fair to suggest that the Boks may have clinched a few more wins if a more accurate goal-kicker had been in tow.

In the first game against Australia, Pollard missed three shots on goal. The Boks ended up losing by two points.

More recently at Twickenham, Pollard and Elton Jantjies combined for three misses. The opportunity to bank eight points via the boot went begging. The Boks ended up losing by a single point.

Wayward goal-kicking is not the sole reason for those defeats, but it certainly is one of the reasons.

The Boks got a lot right in 2021, and a dip in performance could be attributed in part to Covid-related challenges. They have every reason to expect an improvement in the coming season.

That said, they must acknowledge that the level of execution has been below par, and that they have been overly reliant on their bench in recent months.

A more accurate and balanced approach should allow them to realise their potential in 2022.