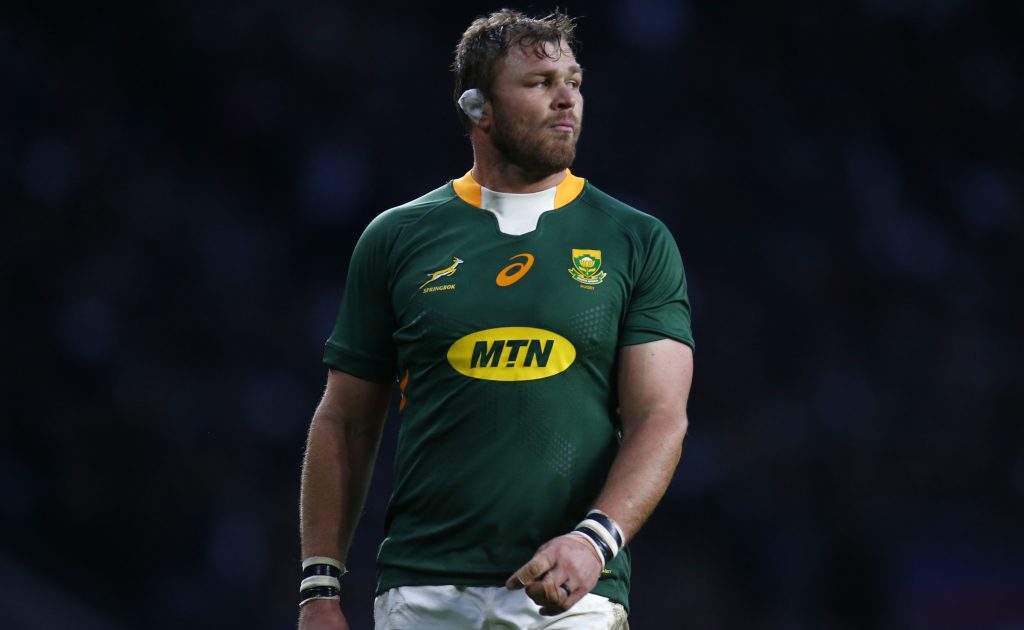 The Springboks have an array of player options at number eight, but there is little doubt that Duane Vermeulen remains one of the team’s most prized assets as the 2023 Rugby World Cup looms on the horizon.

There are now just over 500 days to go until the highly-anticipated opening game of the global showpiece next year, and make no mistake, that period of time will pass by in a flash.

As defending champions, South Africa‘s preparations and considerations for the tournament are already intensifying, with head coach Jacques Nienaber openly referencing the World Cup when recently discussing the first player selections of this year.

After gathering a group of players for the first Springbok alignment camp at the beginning of April, Nienaber faced plenty of questions around the unexpected omissions of in-form Stormers star Evan Roos and Bulls captain Marcell Coetzee. Both are best suited to a role at number eight, and the Bok coach reiterated that there has to be consideration for the limited spots available in the loose-forward department when casting a long-term view to the 2023 World Cup.

“When we go to the World Cup, there are only five spots available for loose forwards… We honestly believe that Duane can still make France 2023, as is the case with Pieter-Steph (du Toit) and Siya Kolisi… Kwagga Smith was also with us at the Rugby World Cup in 2019. If he continues playing good rugby then he can also still make it to France.

“The fifth guy we used in 2019 was Francois Louw and obviously he retired, but look at the age of those other players. Duane is 35, Siya is 30, Pieter-Steph is 29 and then Kwagga is 28. He’s almost a youngster pushing the three older dogs there.”

Nienaber’s point is that, barring injury, four of the loose-forward spots have already been earmarked for settled members of the Bok squad who boast the sort of experience that will be an integral factor in World Cup selection.

The battle for the final spot will be hotly contested, with the likes of Jasper Wiese, Jean-Luc du Preez, Marco van Staden, Dan du Preez and Coetzee all boasting Test experience, while Roos and Elrigh Louw are the in-form youngsters who are banging loudly on the Bok door. It also can’t be forgotten that Franco Mostert offers utility value as someone who can play lock or flank.

It’s an enviable array of depth, but even in the midst of what could turn into a selection headache, Vermeulen still stands out as a player who possesses all the values that the Bok coaches will prioritise at the World Cup.

In many respects, he is the complete package at number eight, with the Springbok stalwart boasting vast experience (he has 61 Test caps to his name), leadership qualities, physicality, breakdown strengths, ball-carrying ability and he is a momentum-stopper on defence.

“I understand the Duane versus Evan hype,” Dobson said. “I thought Evan worked really hard. He almost epitomised our performance, in that he worked hard and showed lots of guts and did some good things but, and I don’t want to sound negative, there are things he can still get better at.

“What I will pay tribute to is Duane Vermeulen. He is coming from a club he has been at for so long, he comes here and plays, but he competes for everything. He was visibly disappointed after that game. Everything was a contest with him.

“That’s a lesson for all. Evan could learn from, not technically so much, but that spirit of Duane. Everything was a battle.”

It’s effectively a testament to Vermeulen’s ‘warrior spirit’ that has become the buzzword for Springbok selection criteria during the Rassie Erasmus-Jacques Nienaber era.

The 35-year-old has already made it clear that his decision join Ulster from the Bulls earlier this year was aimed at continuing to challenge himself.

“There could have been one or two [other offers] in the pipeline, but I had to make an immediate decision. I could have stayed at the Bulls, but I decided to try something else. That’s the biggest thing. I had been in South Africa, played for the Bulls, Stormers, and Cheetahs – life is about experiences as well and not just being stuck in one place.

“A lot of people are really comfortable doing that but I love to move around, learn a bit more. Everywhere I go I learn from different players and cultures. It’s a journey. You’ve got to love the journey. That played a major role in my decision to come here.”

Vermeulen could quite possibly call time on rugby “journey” after the 2023 World Cup, but before then, every indication suggests he will still have an integral role to play for the Boks if they hope to successfully defend their title in France.