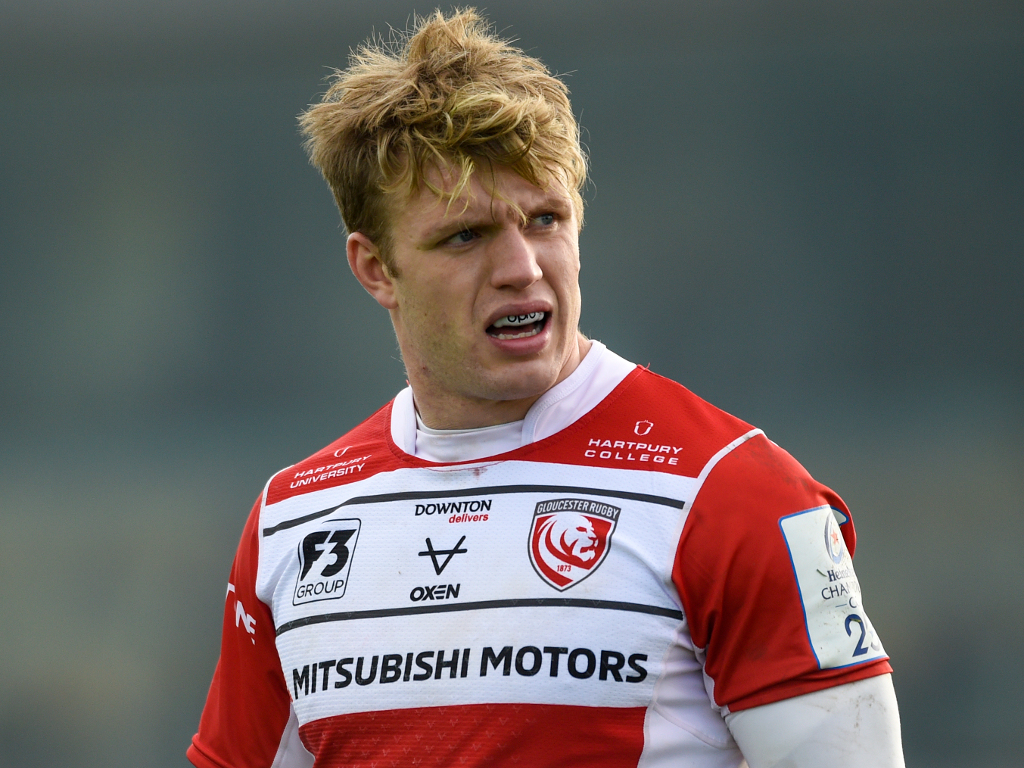 There are four Premiership games scheduled for Saturday and Sunday with league leaders Exeter Chiefs facing off with second-placed Northampton Saints at Sandy Park the pick of the matches.

Bath director of rugby Stuart Hooper has made three changes to his starting line-up which sees Lewis Boyce, Chris Cook and Jack Walker come into the side to face Harlequins.

Lewis Boyce will face his former side for the third time this season as loosehead and replaces Beno Obano, who returned to the England camp ahead of their Six Nations match against Ireland on Sunday.

Cook comes into the side for scrum-half Will Chudley, who featured in the Blue, Black and White’s most recent win over Worcester Warriors with a narrow 22-21 victory at Sixways.

A change at hooker sees Walker come in for Tom Dunn, who is also on England duty.

Josh Bayliss comes onto the bench in place of Taulupe Faletau, who is away on Wales duty in the Six Nations.

Meanwhile, Welsh international Scott Baldwin will make his first Quins start since November, having returned from injury off the bench last weekend.

Club captain Chris Robshaw returns to the side after missing the past two matches through illness, forming a powerful back-row alongside James Chisholm and Alex Dombrandt.

Danny Care comes back into the starting XV, as has Tom Penny who re-claims the number 13 shirt after missing last week against London Irish with injury. Penny’s return means that Cadan Murley returns to the wing, alongside fellow try-scoring winger Gabs Ibitoye on the other side.

Matt Symons and Stephan Lewies have both been ruled out through injury meaning that Scottish lock Glen Young continues in the second-row next to Fijian international Tevita Cavubati.

Form: Bath have won their last two Premiership Rugby fixtures, at home to Leicester and away at Worcester, but have not won three in succession in the competition since November 2016. Bath have lost just once at the Recreation Ground in Premiership Rugby in the last eleven months: 12-25 to Saracens in round 5 this season. Harlequins’ only win in the last four rounds of Gallagher Premiership Rugby was 41-14 at home to Saracens on 26 January. The Londoners have won three of their last four away games in all tournaments. The two clubs have already met twice this season in the European Champions Cup, with Harlequins taking both encounters. In Gallagher Premiership Rugby the last six fixtures between the two clubs have been evenly split with three wins apiece. Harlequins have won on their last three visits to Bath in all tournaments.

⚠️ | TEAM NEWS: Here is our squad to welcome @gloucesterrugby to the Mad Stad tomorrow (kick-off 3pm)!@premrugby Round 11 👊

In the second-row, Franco van der Merwe and Adam Coleman continue their partnership, with Van der Merwe captaining the side.

Matt Rogerson starts at blindside flanker and Blair Cowan returns to the starting XV at openside flanker after missing out last week due to illness. Albert Tuisue continues in the number eight position.

Australia international Nick Phipps starts at scrum-half and Stephen Myler is at 10, with Terrence Hepetema and Curtis Rona, fresh from his two tries against Harlequins last week, in the midfield.

A back three of Ollie Hassell-Collins, Matt Williams and Ben Loader complete the line-up.

Second-row Franco Mostert will continue as skipper in a team that features seven changes from the side that started against Exeter Chiefs last weekend. International call-ups play a part with the likes of Callum Braley, Chris Harris, Willi Heinz and Jake Polledri away on Six Nations duty.

The changes in the pack see Josh Hohneck and Todd Gleave come into the front-row, Ed Slater make his first start since recovering from injury and Freddie Clarke starting on the blindside flank.

In the backs, Charlie Chapman and Ollie Thorley replace Joe Simpson and Tom Marshall who both picked up injuries against the Chiefs last week, and Mark Atkinson resumes his midfield partnership with Billy Twelvetrees.

Amongst the replacements, flanker Aaron Hinkley and Stephen Varney could make their first Premiership appearances of the season, the latter made available by Italy U20s for this fixture.

Form: London Irish have won their last two Premiership Rugby encounters, both on the road at Northampton and at Harlequins. The Exiles have not won three in succession in the competition since February 2014. Irish have lost their last four home games in all tournaments whilst their only victory at Madejski Stadium this campaign was 36-11 against Leicester in Round 4. Gloucester have slipped to defeat in their last three first team matches, whilst their only victory away from home since April was 18-16 at Sale on the opening weekend of Premiership Rugby this season. Gloucester have slot just one of their last eight fixtures with London Irish in Gallagher Premiership Rugby: 18-23 in Reading in March 2016.

Bristol Bears director of rugby Pat Lam has made five changes from the side that beat Northampton in Round 10, as Henry Purdy and Lewis Thiede – the two try-scorers at Franklin’s Gardens – are selected to start.

Homegrown hooker Will Capon will make his first Premiership start in the front-row, while Jake Heenan comes into the back-row.

Skipper Steven Luatua (neck) misses out through injury, so Joe Joyce comes into the second-row, with Chris Vui moving to blindside flanker.

John Afoa is included among the replacements, while Luke Hamilton and Ioan Lloyd also come into the 23-man matchday squad.

All three missed out against Bath last Saturday but have recovered and return to a re-jigged back-line.

Beck replaces South Africa international centre Francois Venter, who faces between four and six weeks on the sidelines having ruptured ligaments in a thumb against Bath.

Wing Nick David retains his place after a successful Premiership debut against Bath which he celebrated with the Warriors’ second try.

Blindside flanker Ted Hill has recovered from a slight groin injury sustained against Bath which prevented him training with England this week and he takes his place in an unchanged pack.

Hooker Niall Annett is set to make his first appearance in two months having recovered from a shoulder injury.

Annett has been named among the replacements along with former England U20s loosehead prop Kai Owen.

Owen will make his first Premiership appearance if he comes on having made five senior appearances as a replacement in other competitions.

Exeter Chiefs director of rugby Rob Baxter has been forced into changing his winning formula from that which defeated Gloucester for this crucial encounter against Northampton.

All three of his changes to the starting line-up come in the back division.

Phil Dollman comes in at full-back for Stuart Hogg, who will skipper Scotland against Italy in the Six Nations on Saturday in Rome, Tom Hendrickson is brought into the midfield alongside Ian Whitten, who will be making his 150th Premiership appearance, and Joe Simmonds returns from his three-game ban to take over the captaincy and number 10 role from Gareth Steenson.

On the bench, England international Alec Hepburn is back after recovering from an ankle injury, Don Armand is given the nod ahead of Matt Kvesic, while Max Bodilly fills the void left by Dollman’s elevation into the starting XV.

Meanwhile, Saints boss Chris Boyd has made eight changes to his starting line-up, with scrum-half Alex Mitchell set to make his first start of the season.

The men in Black, Green and Gold remain second in the Premiership standings despite only picking up losing bonus-points from back-to-back fixtures.

Saints have not lost three league fixtures in a row under Boyd’s leadership and will be desperate to pick up a third away win of the season at Sandy Park to close the gap on Premiership pace-setters Exeter.

Mitchell returns from international duty with England to start in the number nine jersey for the first time this campaign following a lengthy injury lay-off, partnering James Grayson in the half-back berths.

There are two further changes to Saints’ back-line with Andy Symons coming into the midfield to join Matt Proctor, and Ahsee Tuala is selected on the wing – with Tom Collins and full-back Harry Mallinder rounding off the back three.

But Boyd has not been afraid to shuffle his pack after a frustrating defeat to Bristol last time out, as Francois van Wyk, James Fish and Paul Hill all come into the front-row for the trip to Devon.

Alex Coles keeps his place at lock, but Lewis Bean will pack down alongside him in the engine room with Alex Moon set for a spell on the sidelines after picking up a knee injury last weekend.

Captain Teimana Harrison will lead out Saints in the number eight jersey, while Tom Wood and JJ Tonks are named as flankers – the latter recalled this week by Northampton from England U20s duty.

Amongst the replacements Lewis Ludlam, Taqele Naiyaravoro, Cobus Reinach and Fraser Dingwall will all look to make an impact in the second half of the match, while lock Ben Glynn could well make his first Saints appearance off the bench after signing on at Franklin’s Gardens this week.

Form: Exeter Chiefs have lost just once in the last six rounds of Premiership Rugby: 19-22 at home to Sale on 25 January. The Chiefs have lost their last two home games in all competitions but have not lost three in succession at Sandy Park since 2014. Northampton Saints have slipped to back-to-back Premiership Rugby defeats, both at home, to London Irish and Bristol, but have not lost three in a row in the tournament since April 2018. Saints have won twice away from home in Premiership Rugby this season, at Saracens in Round 1 and at Wasps in Round 8. Exeter’s only defeat in their last six Premiership Rugby fixtures with Northampton was 28-31 at Franklin’s Gardens in December 2018 whilst the Saints most recent victory at Sandy Park was in February 2014.