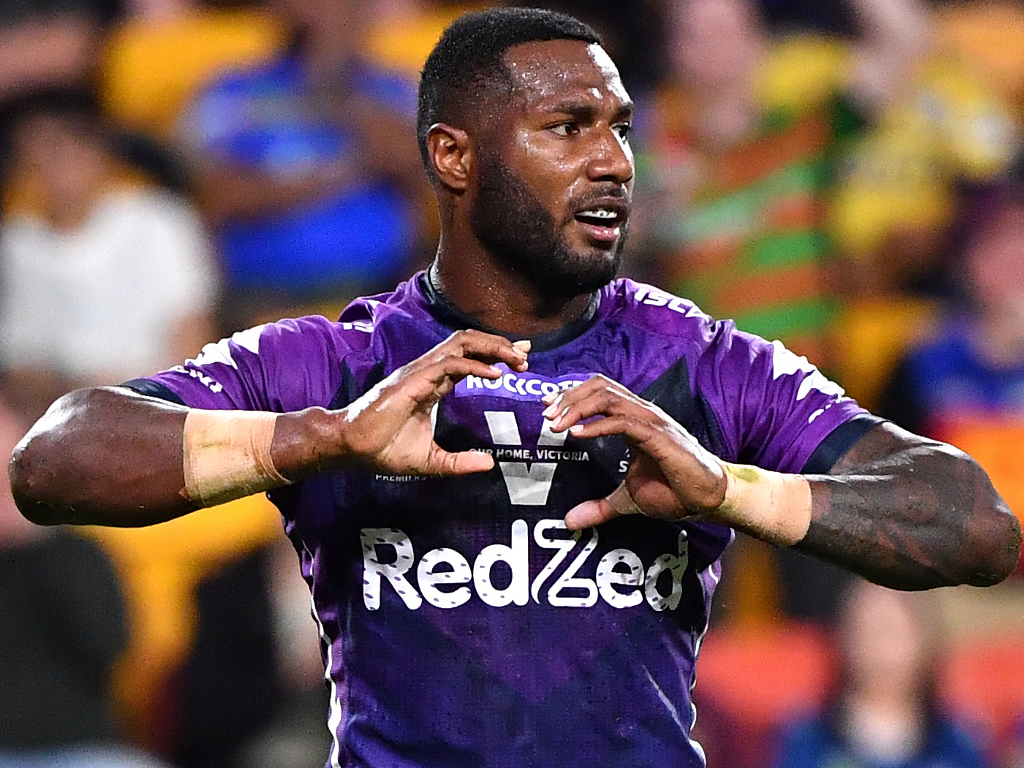 Just weeks after helping the Melbourne Storm to another NRL title, Suliasi Vunivalu is set to follow the same path as his former rugby league team-mate Marika Koroibete and be parachuted into the Wallabies squad for the remainder of the Tri-Nations.

Rugby Australia confirmed The Sydney Morning Herald’s report that the try-scoring machine, who ran the length of the field in last month’s NRL final with an intercept try, will be called into the Wallabies’ squad on Wednesday.

On Tuesday, it’s understood he had a Covid-19 test and after he is cleared he will join his new team-mates on the bus to the Hunter Valley, where the Wallabies will regroup following their Bledisloe win over the All Blacks last Saturday and prepare for their final two Tests of the year against Argentina in Newcastle and Sydney.

While Vunivalu’s call-up will surprise many, he is extremely unlikely to feature in the Wallabies’ final two Tests of the year.

Instead, Dave Rennie wants to see his new winger in the flesh so that he can see him in close quarters and upskill him as quick as possible, before the winger joins the Reds.

It’s the same method of introduction that Michael Cheika used in 2016 when he took Koroibete on the Wallabies’ end-of-season tour to Europe and the United Kingdom. But rather than throwing him to the wolves, Cheika brought him on the tour as a development player and waited until the Rugby Championship to hand the Fijian a Test cap.

Koroibete has been a revelation for the Wallabies since his debut in late 2017 and won the John Eales Medal in 2019.

🗣️ “The player was not entitled to a full 50% reduction due to the presence of two prior offences on his record.” #AUSvNZL

🇦🇺 Lachie Swinton has found out his punishment after his red card. 👇 https://t.co/jhhyNTdQPz

Rennie will be hoping that his new Fijian flyer will have the same impact as Koroibete.

Unlike Koroibete though, Vunivalu has a history in rugby and played the 15-a-side game before being signed by the Storm.

During his five-year career at the Storm, Vunivalu scored a staggering 86 tries. Few were as important as his recent four-pointer, where he stunningly intercepted near his own goal-line and ran 80 metres to score for the NRL heavyweights.

On the evidence of Saturday night though, the winger faces stiff competition to take the jersey off Tom Wright, as the Brumbies flyer didn’t put a foot wrong during his Test debut. Wright took his chance with both hands, having been called in ahead of Filipo Daugunu, who too was impressive in his opening two Tests against the All Blacks before experiencing a tough night in the third Bledisloe Cup Test in Sydney.

The Wallabies face Argentina in Newcastle on November 21, before rounding out the year against the Pumas at Bankwest Stadium in Sydney on December 5.