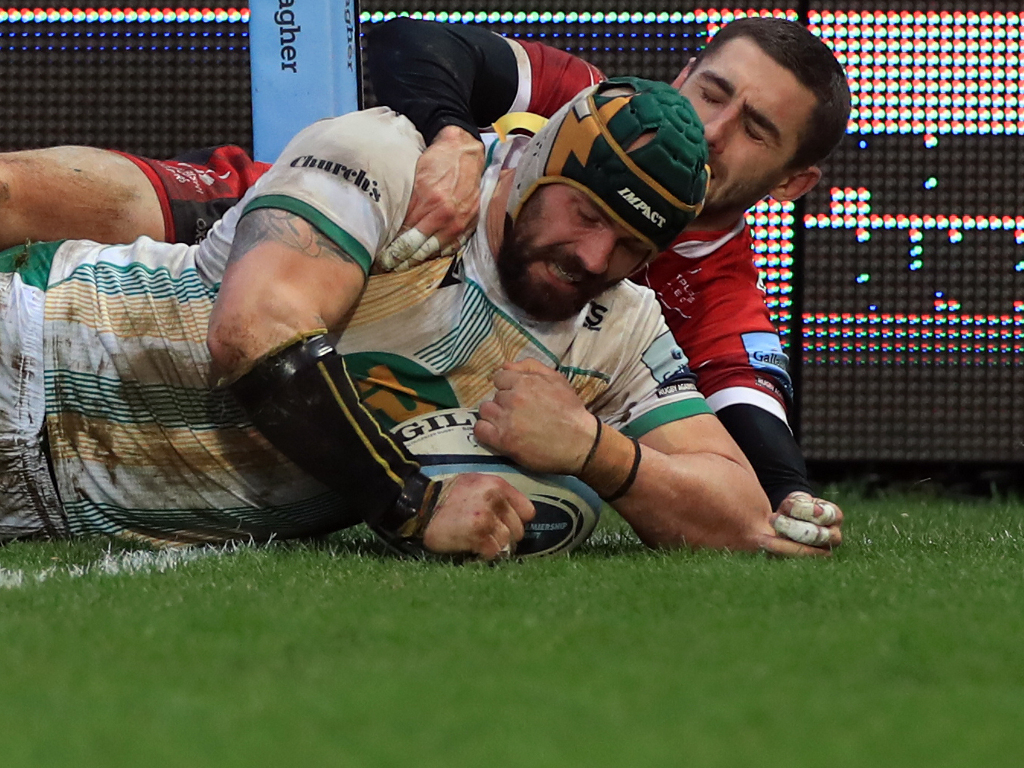 Gloucester remain rooted to the bottom of the Premiership table as they crashed to their sixth defeat in seven league games.

Northampton’s 31-26 success was deserved as they outscored their hosts by four tries to two.

Number eight Shaun Adendorff scored two of them and Taqele Naiyaravoro and Rory Hutchinson got one apiece with Dan Biggar kicking three penalties and a conversion for the Saints.

Gloucester made a hash of collecting the kick-off to gift Saints an early platform which enabled Biggar to kick them into an eighth minute lead with a simple penalty.

Two minutes later the hosts were level when Twelvetrees knocked over a straightforward kick but – playing with the wind – Northampton had the better of the opening 15 minutes.

It was therefore against the run of play when the home side scored next.

From a line-out on the Gloucester 22, opposition locks, Api Ratuniyarawa and David Ribbans made strong bursts to threaten the try-line. A score looked likely but home captain Lewis Ludlow intercepted a telegraphed pass to run 70 metres and when Saints were penalised, Twelvetrees kicked his second goal.

Minutes later Twelvetrees added a third before Northampton scored the first try of the game. The visitors battered the line for a continuous period of three minutes before Naiyaravoro was presented with a walk-in.

Biggar missed the conversion but succeeded with a penalty before Northampton full-back George Furbank and Gloucester wing Santiago Carreras had to leave the field after a sickening mid-air collision resulted in them both receiving lengthy treatment on the floor.

However they recovered to walk from the field before a strong run from Lloyd Evans ended with a high tackle and from the resulting penalty Twelvetrees was on-target to give Gloucester an undeserved 12-11 interval lead.

Brilliantly worked try from the Northampton Saints to earn the bonus point! 👌🔥

After the restart a knock-on from Ratuniyarawa gave Gloucester early field position and they should have capitalised – but Twelvetrees missed with an angled 22-metre kick.

A couple of well-judged kicks from Heinz kept Saints penned in their own half before the scrum-half scored Gloucester’s opening try. On half-way, Olly Thorley burst past a couple of defenders before running 40 metres to send Heinz in under the posts.

Northampton responded with a well-created try when skilful handling gave Hutchinson the opportunity to penetrate the home defence for an excellent solo effort.

Biggar converted before Gloucester conceded a third try. Matt Proctor made ground down the right and when the ball was recycled, a well-judged cross-field kick from Hutchinson was collected by Adendorff to score.

A flowing move, in which Hutchinson and replacement Tommy Freeman were heavily involved, saw Adendorff score his second and the best try of the game before a Biggar penalty sealed the success.

With a minute remaining, Alemanno, forced his way over from close range to give his side a losing bonus point.

Meanwhile, champions Exeter returned to winning ways and moved second in the standings after beating Worcester 21-17 at Sixways.

Successive league defeats against Wasps and Bristol meant that Exeter were searching for a first Premiership victory since Boxing Day.

But although the Chiefs achieved that aim, large parts of their performance proved unconvincing against a Warriors side that rallied impressively from going 14-0 behind in 14 minutes.

Worcester looked as though they might be on the receiving end of a heavy defeat, given Exeter’s ferocious opening, yet they dominated for long periods before having to be content with a losing bonus point.

Lock Graham Kitchener made his first appearance of the season for Worcester after recovering from a broken foot, but there was no place in Warriors’ match-day 23 for new signing Chris Ashton.

Exeter were without England quartet Henry Slade, Luke Cowan-Dickie, Harry Williams and Jonny Hill ahead of the Guinness Six Nations, but Scotland pair Gray and Stuart Hogg, together with Wales prop Tomas Francis, all started.

The Chiefs made their presence felt inside 10 minutes, with Worcester conceding four early penalties and seeing hooker Niall Annett sin-binned for an illegal tackle as Exeter mounted relentless pressure.

And it was Gray who pounced from close range, opening Exeter’s account through a try that owed everything to Chiefs’ revered forward power, with Simmonds converting.

Worcester could not escape from their own half, and Exeter struck again in the 14th minute after Hogg created space through some neat footwork, before Whitten touched down following Sam Simmonds’ assist, and Joe Simmonds added the touchline conversion.

The Warriors’ problems deepened when fly-half Billy Searle was forced off injured, but they dug deep and carved open Exeter’s defence with a fine 29th-minute try.

Wing Perry Humphreys was the architect, changing the angle of an attack by delivering an exquisite pass to Morris, who sprinted clear and claimed his first Premiership try.

Weir, a replacement for Searle eight minutes earlier, kicked the conversion and Worcester were back in contention, before he landed a penalty that further cut the deficit by half-time.

It was a curious opening 40 minutes from the Chiefs as they saw a dominant opening give way to a combination of Worcester’s recovery and their own mistakes.

But the visitors made a flying start to the second period, with Gray’s pass opening up space before a sharp break by Devoto took him over for Exeter’s third try, converted by Simmonds.

Devoto was then sin-binned, though, for a high tackle as Worcester tried to respond, and the Warriors pounced after defensive hesitancy from Chiefs wing Olly Woodburn saw Weir capitalise and collect a try that he also converted.

Weir could have cut the gap even further, but he drifted a straightforward penalty chance wide and Exeter were able to close out the game, albeit without reasserting anything like their first-half authority.