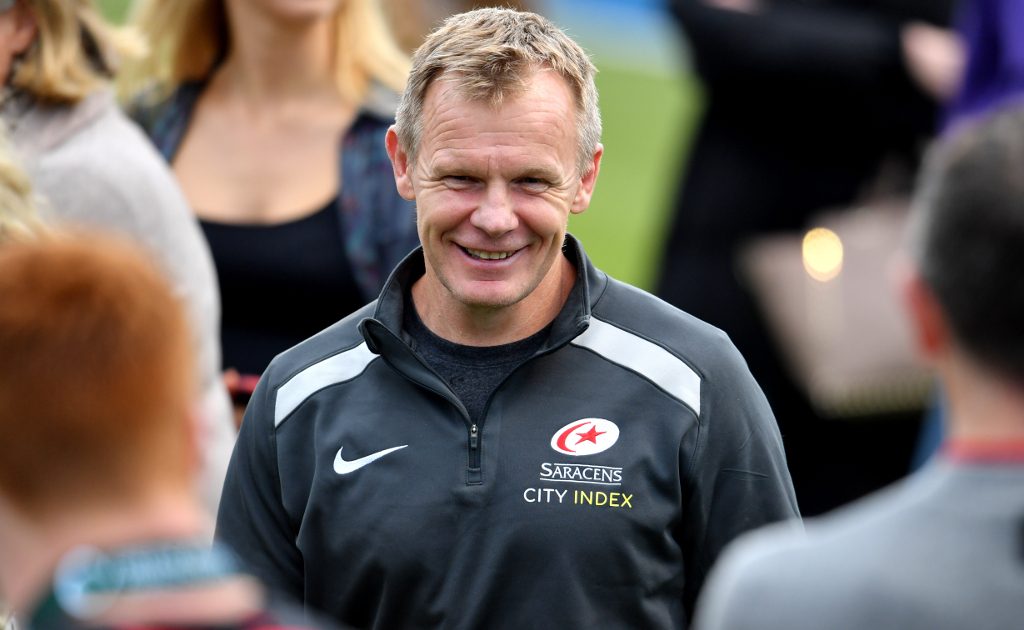 Saracens director of rugby Mark McCall has stressed that they are not setting targets in terms of where they might finish in the Premiership ahead of their return to the top flight.

The north London outfit play their first Premiership match for almost a year when they take on Bristol Bears at Ashton Gate on Friday to open the 2021/22 season.

Favourites to win the Premiership

Saracens, who returned to the top flight of the English game as 2020/21’s Championship winners after being relegated in 2020 following persistent salary cap breaches, have been installed by bookmakers as favourites to claim the trophy.

Director of rugby McCall was asked at a press conference on Tuesday if the top four would be a good result for the team this term, or if the target was simply winning the competition.

And he said: “Certainly since I’ve been at the club, we’ve never ever set a goal like that. We’re much more concerned about being very clear on what kind of group we want to be on and off the field, on what we value as a group, and we’re intent on getting those things right.

“It’s just the start of a new season for us. This is what we’ve always done and it’s important that we do what we have done in the past. The group are very involved in this, what we prize and value as a group on and off the field, and what we tend to find is if we get those things right, the rest takes care of itself.

“This is a very long season and we’re confident that we’ll get stronger the longer the season goes on.”

Asked if people questioning the validity of Saracens’ trophies in the past provided extra motivation heading into this season, McCall said: “I can’t speak for everybody. There are individuals within the group who have got certain feelings, and certain ways of motivating themselves, and that’s a good thing overall.

“But from my point of view, I don’t want to be too stuck in the past, I want to look forward as much as possible.”

Centre Alex Lozowski – among a group of players who have returned to Saracens after spells on loan, having been at Montpellier last term – said: “I think a lot of people have had a lot of things to say.

“We don’t take too much notice of it. We’re just trying to concentrate on what’s important to us and then we’ll just have to see where we are at the end of the season. Perhaps we’ll be able to put all those things that have been said to bed.

“I wouldn’t say we’re doing anything to prove anyone wrong, it’s more just to probably prove ourselves right. Some people in the team might take notice of a few things that have been said and that might spur them on a little bit more, and that’s fine, but I think all in all we’re highly motivated and a lot of it comes from within.”

Lozowski added of comments made about the club: “It’s all sort of in one ear, out the other if I’m honest with you. I think it’s probably just the relentlessness of it which is amusing.”

Saracens on Friday will be without players who were involved in the summer’s British and Irish Lions tour of South Africa – Maro Itoje, Mako Vunipola, Owen Farrell, Elliot Daly, Jamie George and Vincent Koch – plus the quartet of Duncan Taylor, Alex Goode, Max Malins and Sean Maitland due to injury, and the suspended Ivan van Zyl.

One player set to take part is Billy Vunipola. McCall has described the back-row, who missed out on Lions selection, as having “the bit between his teeth” and “as fit as I’ve seen him for a long time”.

He also said, when asked if Vunipola was over his Lions disappointment: “I’m not sure he definitely is. I haven’t talked to him a lot about it in the last couple of months. I know he was hugely disappointed not to go, and sometimes those things take time to get over.”

Pat Lam expects Saracens to be a force