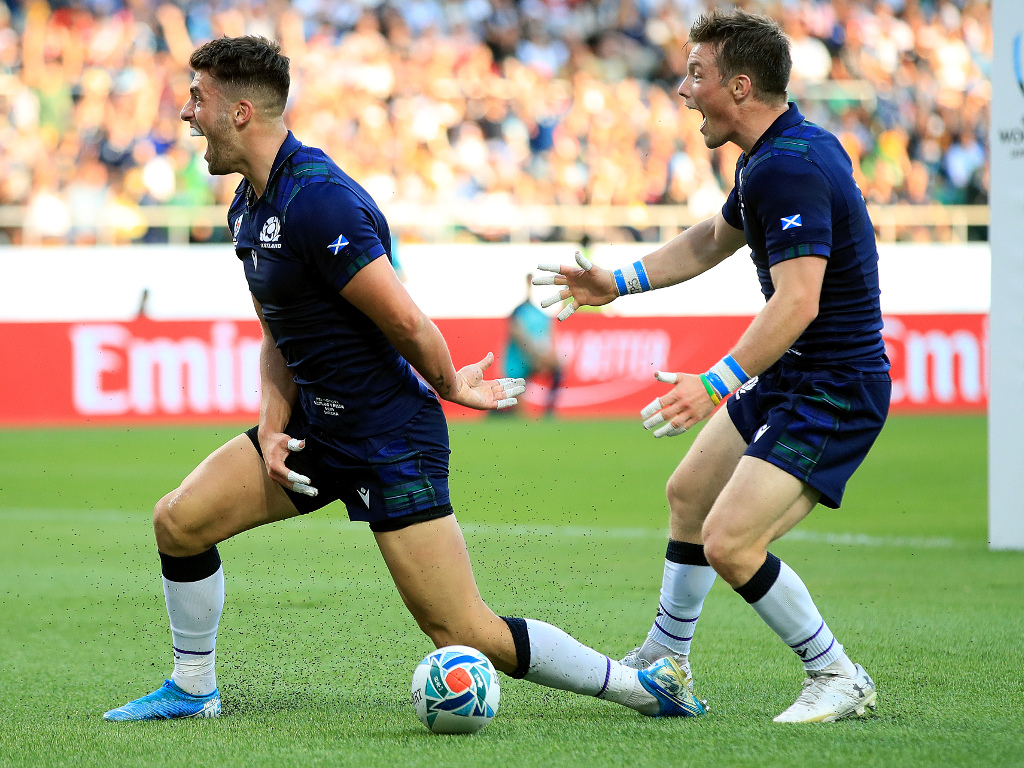 Scotland produced the performance of their Rugby World Cup thus far as they hammered Russia 61-0 at Shizuoka Stadium Ecopa on Wednesday.

With a try bonus-point also achieved, the Scots claimed the required five points that sets up a mouth-watering clash with Japan on Sunday.

The Scots were two thirds of the way to that critical bonus point at the halfway point in the game after an impressive opening 40 minutes.

Critics of Gregor Townsend’s decision to make 14 changes to his XV were swiftly silenced when, after a non-stop first five minutes to the game, Scotland opened the scoring through Hastings. The fly-half dummied 15 metres out before showing a good turn of pace to make it 7-0.

The playmaker was over again on 19 minutes but in slightly fortuitous circumstances as his kick ahead would evade Russia full-back Vasily Artemyev in the in-goal area and Hastings would gleefully dot down to double the advantage. It was a perfect opening quarter for Scotland.

Scotland were now on a roll but Russia did not help themselves, a third try coming on 23 minutes as Dmitry Perov’s pass on his own try-line from a lineout was intercepted by the busy Horne. Scotland though weren’t complaining as they were on the verge of mission accomplished.

The fourth try would not arrive in the half, however, as Russia stood firm in their own 22 before a knock-on ended the Scottish onslaught.

It wouldn’t take long for the fourth try to arrive as just five minutes into the second period scrum-half Horne finished off a wonderful breakout from wing Darcy Graham. The sense of relief was visible in the Scotland camp as they knew they had the five matchday points they needed.

That prompted a release in pressure and Scotland turned the screw, with hooker Turner next to go over as he broke away from a maul.

Seymour got in on the act on 56 minutes as he did well to dive on a smart Blair Kinghorn kick through, with Scotland now up to 42 points.

It was now a case of how many Scotland would get and they showed no signs of slowing when Horne completed his hat-trick on the hour mark, collecting a pass from Henry Pyrgos on the left wing to cap a memorable individual feat. Hastings could not add the extras so it was 49-0.

Horne’s evening almost got better shortly after when he crossed for what looked like a fourth try. However, the final pass was adjudged to have been forward. That mattered not though as the half-century was brought up late on, with Barclay cruising over before McInally wrapped up an impressive victory that gives Scotland confidence ahead of this weekend’s huge fixture.