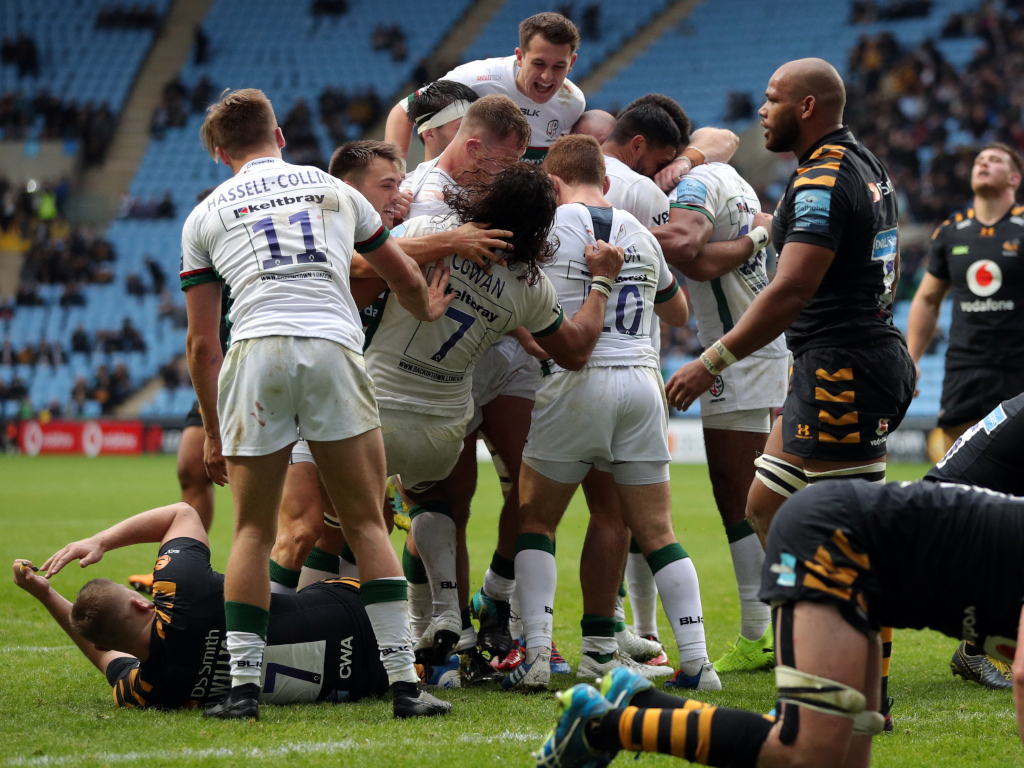 Fly-half Paddy Jackson missed three kicks but his four penalties and a conversion were just enough to give his side victory. Blair Cowan, Albert Tuisue and Ollie Hassell-Collins were the Irish try-scorers.

For Wasps, Zach Kibirige scored two tries, Dan Robson the other, with Lima Sopoaga kicking two penalties and a conversion. Jacob Umaga added a late three-pointer to secure a bonus-point for his side.

Irish had the first chance for points but Jackson made a real hash of a long-distance penalty attempt. Soon after, Sopoaga showed Jackson how it was done by firing a kick over from a similar range to give Wasps a ninth-minute lead.

However, Irish immediately responded with an excellent try. Neat handling sent Hassell-Collins away down the left and when the wing was hauled down 10 metres short of the line, Cowan was on hand to pick up and drive over.

Jackson missed the conversion before Sopoaga put the hosts back in front with his second penalty to leave Wasps 6-5 in front at the end of an evenly-contested first quarter.

Scenes in the away dressing room ☘️☘️☘️

A high tackle by Wasps centre Malakai Fekitoa on Hassell-Collins allowed Jackson to score his first points with a straightforward kick but the Exiles botched the restart and the home side capitalised.

Wasps seized possession before a burst from Fekitoa put the defence on the back foot and swift transfers allowed Kibirige to squeeze in at the corner.

Jackson brought Irish level with his second penalty before they lost their captain Franco van der Merwe, who failed a head injury assessment.

The lock’s departure did not stop the visitors’ momentum as the impressive Tuisue powered over from a lineout. Kibirige raced in for his second at the other end and there was just time left in a frenetic half for Jackson to kick a penalty and leave Irish with a 19-16 half-time lead.

Within three minutes of the restart, Irish had their third try when a superb pass from Cowan sent Hassell-Collins away and the wing had no trouble in outpacing the cover defence.

Jackson converted and added a penalty before Kibirige was narrowly denied a hat-trick by a brilliant tackle from Hassell-Collins, who forced his opponent into touch inches short of the line.

Visiting lock Ruan Botha was then sin-binned as Wasps built up sustained pressure and they were rewarded when Robson darted over from close range.

Umaga, on for Sopoaga, kicked a penalty before Botha returned to try and stem the Wasps’ tide and he succeeded as Irish held on by the skin of their teeth for a memorable victory.